Chamber Music Northwest’s summer festival presented a unique concert on July 16, one of the strangest I’ve ever heard. The program Colors of Debussy & Crumb at Reed College featured George Crumb’s A Journey Beyond Time (American Songbook II), which pairs African-American spirituals with more than a hundred percussion instruments. The outlay covered the floor of Kaul Auditorium, and as a result most of the audience perched in the risers, giving us a bird’s eye view of the performance.

Kenneth Overton, one of the spectacular soloists in the world-premiere of Damien Geter’s An African-American Requiem in May, applied his resonant baritone to the soul-searching songs. Sandbox Percussion (Ian Rosenbaum, Terry Sweeney, Jonny Allen, and Victor Caccese) commanded the panoply of drums, gongs, chimes, bells, xylophones, cymbals, steel pan, bowls, shakers, bundles of sticks, stones, and a lion’s roar. Ellen Hwangbo blew the shofar and played the piano (technically a percussion instrument), which was often muted to produce a slightly distorted sound. The sonic variety created by these instruments was strikingly original and frequently delivered with a soft touch.

A Journey Beyond Time offered eight numbers, beginning with “Swing Low, Sweet Chariot.” It received a steady and lyrical quality from Overton against an odd assortment of sounds from the percussion ensemble, including strokes of bass violin bows against some of the instruments. “Joshua Fit de Battle ob Jericho” was spectacularly dramatic, with the shofar (ram’s horn) blaring over a cacophony that ended with pounding drums to signify the walls that came tumbling down. “Steal Away” effectively used the steel pan to evoke a fugitive’s prayer during the time of the Underground Railroad. The bass drum wonderfully accented the “bosom of Abraham” in “Oh, a-Rock-a-My Soul.”

“Sit Down, Sister” was impatiently playful with Overton hamming it up and eliciting chuckles from the audience. Lonesome sounds lent a haunting atmosphere to “Nobody knows de Trouble I See.” Underscored with the Dies Irae melody, “Go Down, Moses” erupted with the lion’s roar and Overton’s demonstrative voice to “let my people go.” “Sometimes I Feel Like a Motherless Child” concluded the set of songs with a lingering pensiveness.

Each piece in A Journey Beyond Time began with percussion, but most of the time there was no distinct tone for Overton to grasp for his first note. It seemed miraculous that he could sing any of the songs without causing a collision somewhere along the way, but it always worked. So, I had to ask him after the performance if he had perfect pitch. He told me that although he has 90 percent perfect pitch, the real secret is to focus on the right pitch before the piece begins.

In contrast to the percussion-heavy Crumb composition, the concert opened with a tonal gem: Claude Debussy’s String Quartet in G Minor, his only string quartet. It was masterfully performed by CMNW’s protégé ensemble, the Viano String Quartet (violinists Hao Zhou and Lucy Wang, violist Aiden Kane, and cellist Tate Zawadiuk). Their taut playing opened the first movement with terrific emotion and verve. The cantabile between Zhou and Zawadiuk during one section was outstanding. In the second movement, violist Kane superbly etched the repetitive line of the second movement against the pizzicatos of her colleagues, and the sudden bursts of fortes were thrilling. A delicious languid sound permeated the third movement, and the fourth seesawed back and forth with intriguing melodic lines and exciting dynamics before winding up with an emphatic finale.

This fascinating concert was filmed by CMNW, and is now available on its website at CMNW.org/watch.

James Bash
James Bash enjoys writing for The Oregonian, The Columbian, Classical Voice North America, Opera, and many other publications. He has also written articles for the Oregon Arts Commission and the Grove Dictionary of American Music, 2nd edition. He received a fellowship to the 2008 NEA Journalism Institute for Classical Music and Opera, and is a member of the Music Critics Association of North America. 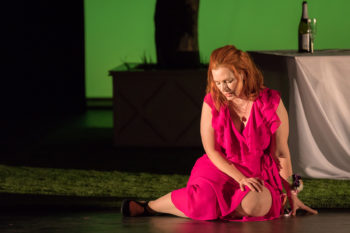