The nonprofit offers two-week immersive classes in everything from print-making to Ghanian drumming to performing in a Shakespearean play.

It’s summer vacation, and Willamina Elementary School is buzzing with activity. On a sunny, warm weekday morning, 10 students ages 9-16 are making space aliens out of masking tape — “taper mache” — and discussing the latest episode of Stranger Things. Elsewhere in the building, students are using the skills they’ve learned over the past few days to make prints, collages, and fabric arts. A lesson in Ghanian drumming follows, with more classes and a rehearsal of a lively scene from A Midsummer Night’s Dream after lunch.

This is Art Conspiracy West Valley, and after a two-year pandemic hiatus, it’s back.

Summer art camps, of course, have been a thing for at least half a century. In Yamhill County, there have traditionally been good opportunities for students through programs offered by the parks and recreation department in McMinnville and, in Newberg, the Chehalem Cultural Center. But in smaller, cash-strapped cities and school districts such as Willamina, such programs are in shorter supply.

That’s where Art Conspiracy comes in.

It was conceived in the spring of 1998 around the kitchen table of Sheridan artist Monica Setziol-Phillips, the daughter of famed Oregon woodcarver Leroy Setziol. Her work has been exhibited in the Willamette Valley and on the Oregon Coast.

“I invited a group of women to tea and we talked about what was needed in the community as far as arts and kids were concerned,” said Setziol-Phillips, who lives with her husband, actor Josiah Phillips. Planning took a year, and Art Conspiracy was launched in 1999 at the old Chapman Middle School in Sheridan; most of the camps have been at schools in Sheridan, followed by Willamina and Amity. The program is open to children from throughout Yamhill and Polk counties, but students from these west valley cities, along with Grand Ronde, are given priority.

The disparity between rural communities such as Willamina and the larger McMinnville is striking, illustrated by a United Way economic study a few years ago.

Prior to the pandemic, United Way of the Pacific Northwest reported that 12 percent of Oregon households fell below the federal poverty line, and another 32 percent earned more than that — but still didn’t bring home enough to cover basic household needs. That’s the so-called ALICE threshold: Asset Limited, Income Constrained, Employed.

Drilling down into Yamhill County, the study found 54 percent of the county’s 37,235 households were below the ALICE threshold. In McMinnville, that number was 63 percent; in Willamina, where the school district in 2019 was one of eight in Oregon to receive supplemental income from the state, it was 82 percent.

Willamina schools and other rural districts in Yamhill County are starting to successfully integrate art into career and technical education programs, but Art Conspiracy teacher Julie Jeanseau has found that in her work with similar nonprofits around the Willamette Valley, art instruction tends to be a blind spot. “Most of our rural schools out here don’t have art in the elementary school, it’s just zero,” said Jeanseau, who teaches art at a Catholic school. “I’ve been doing this for about 30 years and I’m literally teaching fifth-graders to make the color purple.”

“In rural areas, opportunities to be meaningfully engaged in the arts are few,” said Setziol-Phillips. “Park programs, by their nature, cannot provide much. We wanted something that had some depth to it.”

The depth offered by Art Conspiracy West Valley is impressive. Students sign up for two classes, one in the morning and another after lunch. The classes have a workshop vibe, and each runs 2½ hours. That gives Jeanseau, for example, time to work on basic foundational skills: shape, color, form, space, perspective. Classes are limited to 10 students.

“We really wanted a relationship between student and teacher, so the teacher could give them more time,” Setziol-Phillips said. “And we wanted it 2½ hours, because we wanted kids to be able to really get into it. So each child takes two classes, they stay in that class for two weeks, which gives them a pretty good immersion in whatever medium they choose.”

Evan Tait, who taught theater in Yamhill-Carlton last year and this fall will take over the theater program at Stayton High School, has a theater voice that fills the room, which in this case is the Willamina High School commons area. Students holding scripts are on the commons stage, rehearsing Act III, Scene II of A Midsummer Night’s Dream, and Tait occasionally interjects, frequently on the topic of volume. Leading by example, he intones:

“That’s important, give that line to the audience so they can hear you!”

“I cannot hear you, Demetrius!”

“Slow it down! You’re racing through it like broccoli on a Thursday!”

“That’s such good dialogue, and you’ve memorized it well, so give it to the audience!”

“Shakespeare is an apology-free art! You can do anything you want and you don’t have to apologize for it!”

Most of the students here, Tait said, have some familiarity with Shakespeare, if nothing else than as the-guy-who-wrote-Romeo-and-Juliet. But he has them for 2½ hours, so they’re getting some of that immersion Setziol-Phillips is talking about. “I made them a Shakespeare survival guide,” he said. “It has all the plots of everything, divided up into different genres, and they really responded to it.”

This is 16-year-old Eleanore Stritzke’s first spin with Shakespeare, and she’s one of two students who play the mischievous Puck.

“The idea of doing it makes me nervous, but it’s not as stressful as everybody thinks,” she said. “It’s fun to do it in a group, everybody’s having a lot of fun.”

On the final day of camp, students will perform this scene for parents and friends. Another presentation will feature most of the same students from Tait’s morning musical-theater class, where students picked songs from popular musicals such as Heathers and The Addams Family to perform.

“I think it’s so important that we have more of these opportunities, where they’re able to combine classroom experiences and that kind of blended educational experience with actual performance in front of a crowd,” Tait said.

In terms of enrollment and offerings, Art Conspiracy peaked in the 2000s, which saw as many as 100 students enrolled in more than a dozen classes, with a field trip on the final day.  “A lot of these kids,” Setziol-Phillips said, “have never even been to Portland.” In little more than two decades, roughly 1,200 students have enrolled in the camp, and this rebuilding year finds roughly the same number of students participating as in 1999: fewer than 40. The goal, she says, is to get it back up to around 100.

Tuition covers roughly a third of Art Conspiracy’s costs; not only are teachers paid, but they also get mileage and a stipend for materials, and busing is provided for students. “We are a completely volunteer-board-run organization,” Setziol-Phillips said. “Funding is always an issue.” This year, a grant from the Yamhill County Cultural Coalition enabled them to bring in Lewis & Clark’s Alex Addy for the drum workshop. Planning for the 2023 camp will begin soon.

“These guys are really well-structured and well-organized,” said Sonia Allen, a Salem artist and teacher who works closely with the Salem Art Association. “The kids are interested and participating. It’s a joy to work with them.”

The camp is only a two-week flyby in an otherwise long summer break, but like any encounter with art, it is rich with potential and possibility; sometimes it is years before the seeds that Art Conspiracy plants bloom. This year Setziol-Phillips heard from a student who went on to become a successful house designer in Central Oregon.

Jacob Russell, a Sheridan High School graduate who enrolled in Art Conspiracy as a kid, put it this way in a note Setziol-Phillips is happy to share: “When I think about the summer arts program I was a part of, I think about it as something that defined a big part of who I am. Thank-you!” 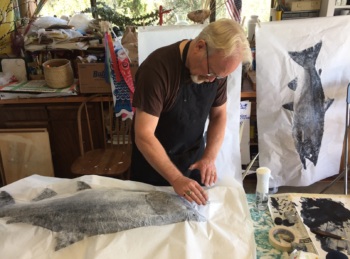 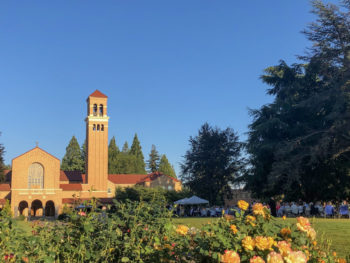