Story and photographs by FRIDERIKE HEUER

We have this thing in our household about language. Well, someone has a thing in our house about my language – more specifically, my usage of the verb to love as applied to something other than a human being. Don’t devalue such a strong emotion, I am told, by wasting it on things, not persons! (That from the same Beloved who still despises split infinitives…) 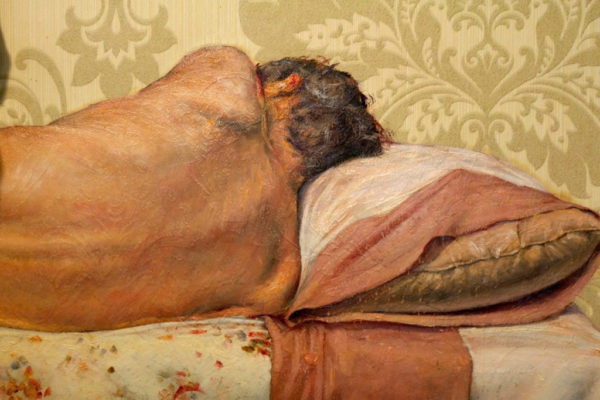 Jay Senetchko, Sleepwatcher at the End, oil on wallpaper, detail

I can’t help it. Here I go again: I love this state. I love finding out new, beautiful things about it, even after 33 years since our arrival from New York City. You turn around and face surprises, in the natural as often as in the cultural landscape. Case in point was a recent visit to Astoria. I have written here before about this small former fishing and cannery town at the mouth of the Columbia river. I’ve described the increasingly vibrant art community, the diversity of what is on offer, from music to photography, from the perspective of a visitor as well as from that of an exhibiting artist.

Outside the Nebeker Gallery at Clatsop Community College.

I had, however, never visited the Royal Nebeker Art Gallery on the campus of Clatsop Community College. And I had certainly not seen any of the 12 previous annual exhibits dedicated to the Nude.  My loss. Both with regard to not knowing about the small jewel of a space nestled among trees on the top of a hill overlooking the river as it flows into the ocean; and with regard to tightly curated, thought-provoking exhibitions, if past shows in any way resembled Au Naturel: The Nude in the 21st Century, the one currently on offer. 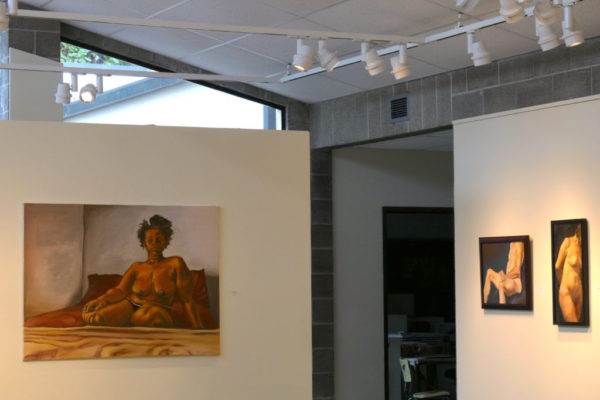 My visit was prompted by an invitation to have a conversation with Carol Newman on the local radio station, KMUN, about a joint project with artist Henk Pander. He had last year painted me and my scarred body, the portrait juried into the current exhibition. While he painted I documented the process with my camera – a double portrait of artistically driven friends coming to terms with age, illness and a passion for observing. (Here is the long version, from Oregon ArtsWatch, Dec. 3, 2017) 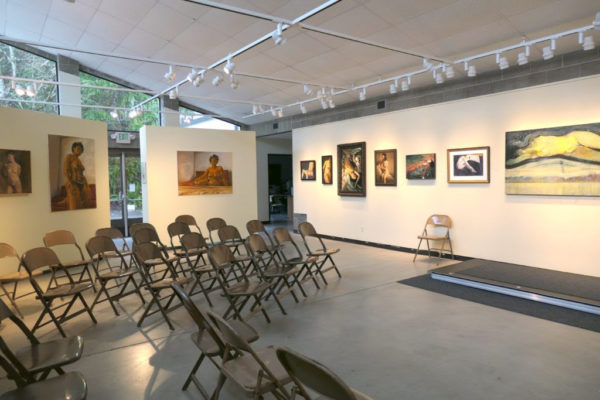 Gallery and paintings, open for discussion.

Before we sat down to talk about the experience we visited the CCC premises to look at the show. The place was bustling with activity to set up for that evening’s performance of Eve Ensler’s play The Vagina Monologues. Kristin Shauck, fine arts professor who has initiated and run the series since its inception, welcomed us. A woman whose passion about art boils under a veneer of quiet reserve, she deserves the 2019 Astoria Juggling Award: so many balls in the air without dropping a single one, all a few days before a major show opening.

The show was hung, ready for opening night this Thursday, Feb. 7 – and it is quite compelling. 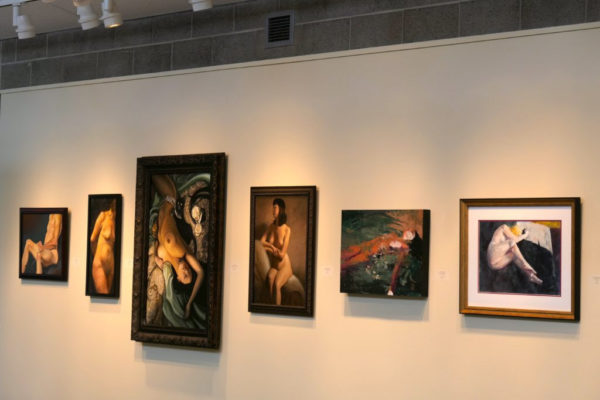 I don’t envy anyone the job of having to choose a limited number, some 50 or so, of artworks from over 400 submitted by an international pool of artists. A job potentially made harder by the fact that both paintings and drawings are under consideration. And I wondered what it meant to say curatorial choices would be influenced by “the principles of highlighting contemporary bodies and the value in depicting them with radical clarity.” 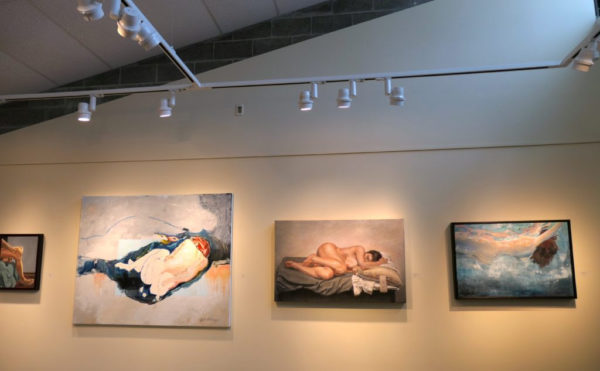 Juror Ashley Stull Meyers‘ vision certainly produced a set that was clear and contemporary. It was also sufficiently dissonant to keep you interested long after the first round of looking at the whole, something I could have anticipated, given her role as director of the now closed Marylhurst Art Gym – so deeply missed.

There were a number of juxtapositions that you’d expect: full nudes vs. partials, general sweeps vs. detail-orientation, seriousness (serious seriousness!) vs. charming teases. But there were also curatorial choices that I found noteworthy: giving preference, at times, to expressed ideas rather than level of technical skill, and groupings that allowed strange inclusions among the more quotidian pieces. 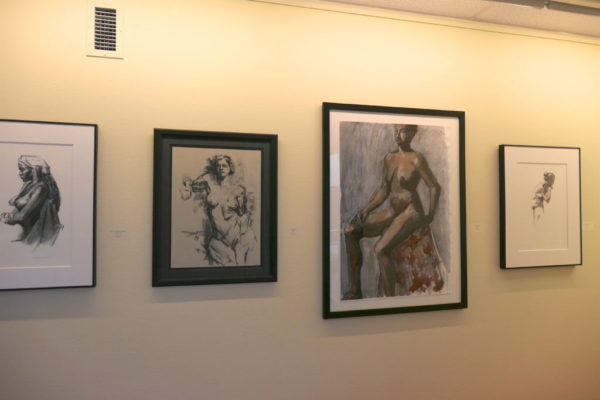 I just regret the curious lack of color. Maybe that had to do with the nature of the submissions; maybe the artists prefer the pinks, the ivories, the mostly earthy tones, the browns, the umbers, the fawns, the fallows. Those backgrounds gave the art along the walls a sameness that could have used some serious disruption. 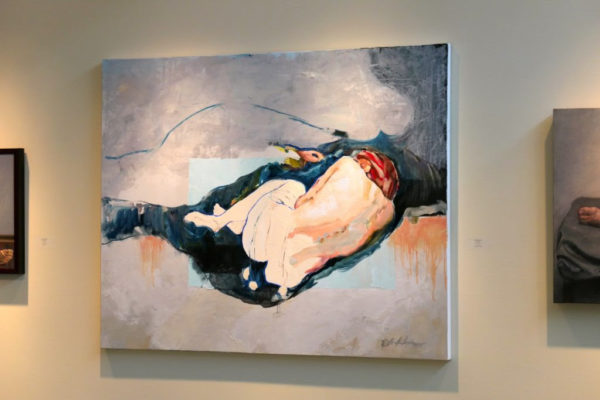 The occasional outlier provided a welcome respite. My favorite in that regard was Beth Kehoe’s Shore, a painting that reminded me of some of Egon Schiele’s nudes that I grew up with. Perhaps coincidental likeness, not that I mind appropriation. 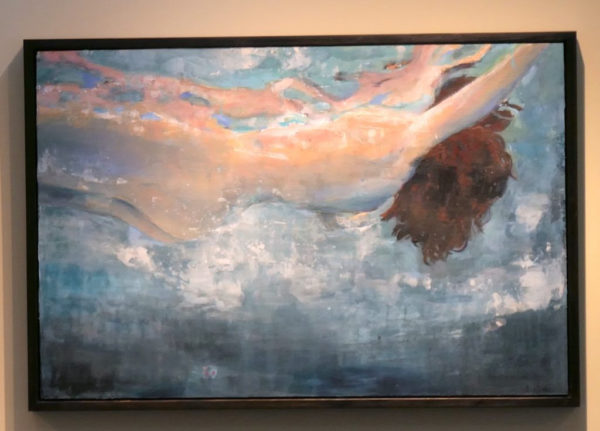 Other visitors were drawn around Drea Frost’s female figure submerged in ocean waves. The lovely, thoughtful young artist had painted her in response to recent loss, creating ambiguity: blissful floating or dangerous unmooring? 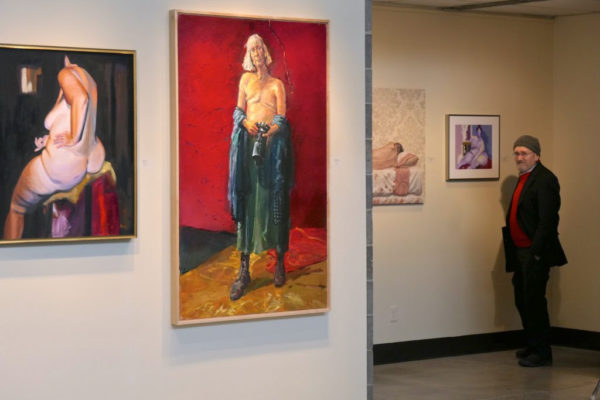 My own contemporary body, exposed in public, felt doubly jarring among all these voluptuous females.

My current mind, however, had a blast – a few funky reflections beckoned to be photographed. As I said, surprises around every corner. How I love them! There, I used that word again… 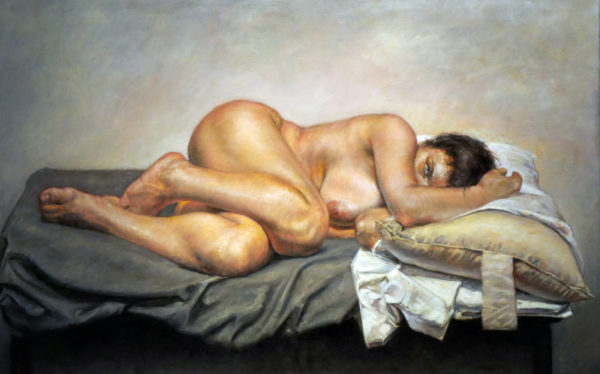 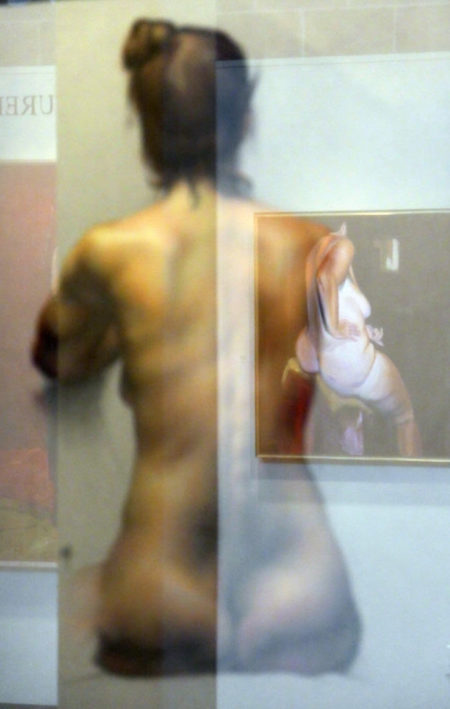 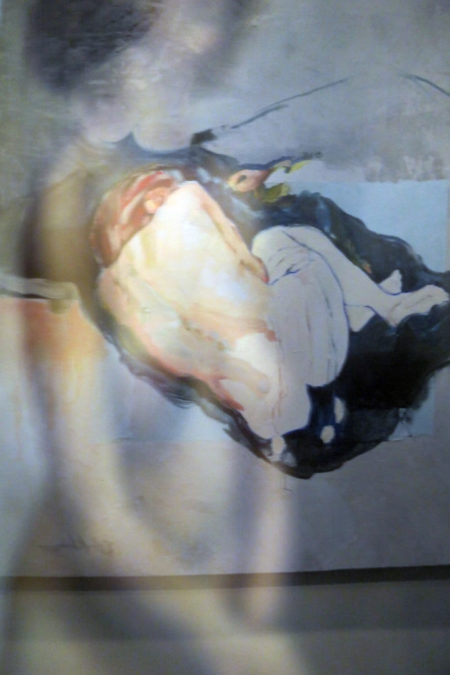 You can catch the show here:

Au Naturel: The Nude in the 21st Century will be on display through March 14 at Clatsop Community College’s Royal Nebeker Art Gallery, 1799 Lexington Avenue, Astoria, OR. A free community reception will be held on Thursday, February 7, at 6 p.m., and this year’s juror will be present to give a brief gallery talk.

Friderike Heuer’s photo essay first appeared on her web site YDP – Your Daily Picture on Monday, Feb. 4, 2019, under the title Art on the Road: Au Naturel, Astoria. It is reprinted here with permission. You can subscribe to YDP and receive it daily via email.