Art on the Road: Becoming modern

Something is in the air – and I am not just referring to mobiles, although every museum I set foot in during a short trip to the East Coast last week seemed to have something floating about. 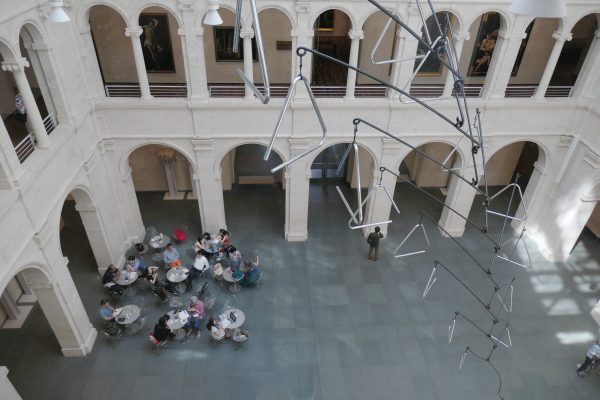 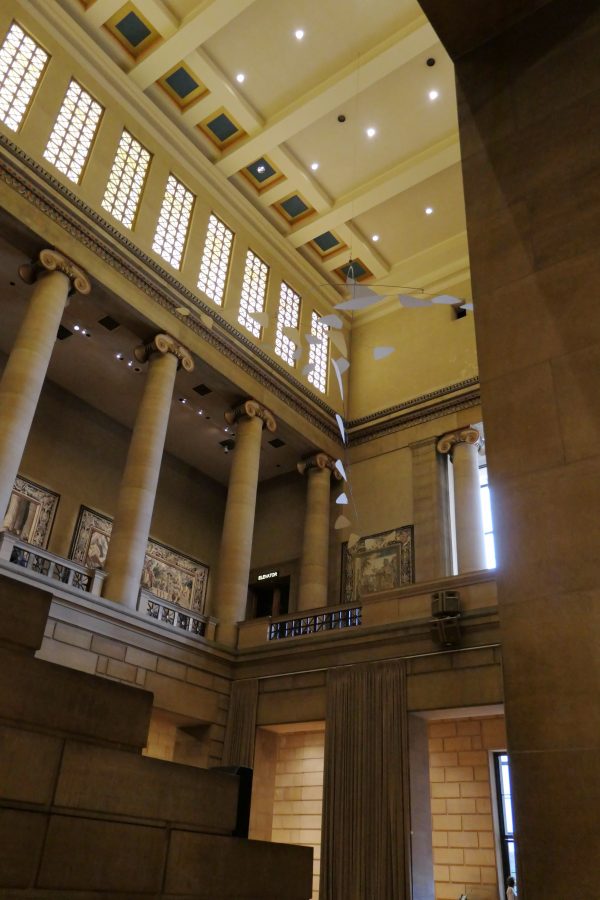 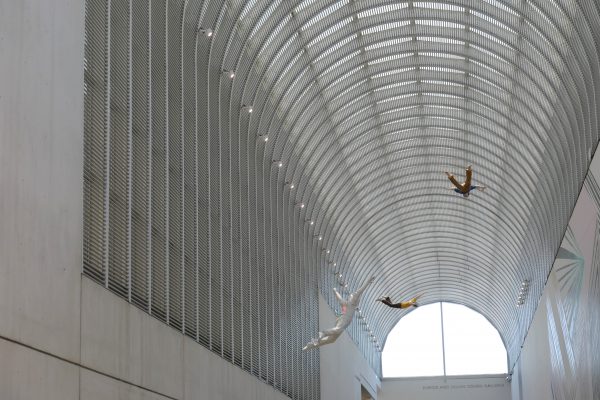 Rather, the air is suffused with a desire to take stock of periods of the past that just might inform us about how to handle the present, in our understanding of art history as well as that of our times. Two current exhibits are the perfect examples of this: Inventur at the Harvard Art Museum in Cambridge, Massachusetts, and Modern Times at the Philadelphia Museum of Art.

(Photographs below are all paired with Inventur first, Modern Times second.) 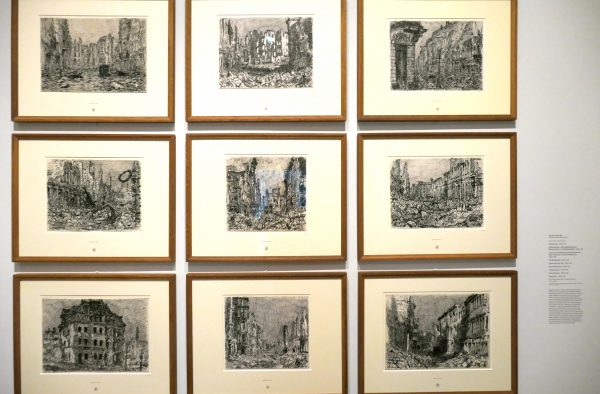 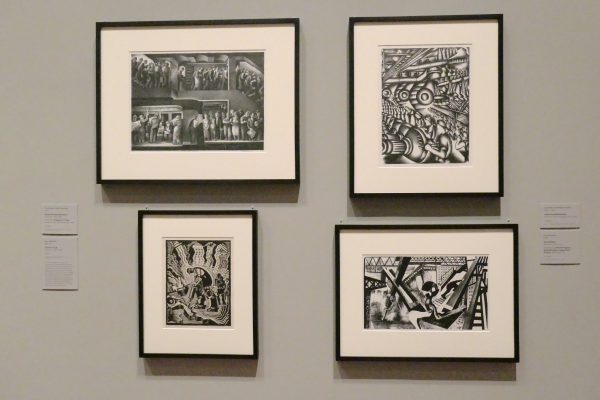 Inventur focuses on German art, while Modern Times covers the American departure into modernity. There are striking parallels of curatorial choices and artistic achievements in both of these exhibitions. They cover a limited period of time (1943 – 1955 for Inventur; 1920s to the 1950s for Modern Times,) display an incredible diversity of artists active during those periods, include painting, photography, collage and sculpture, and rely on core themes equally important for the artistic developments in both countries during the first half of the last century. 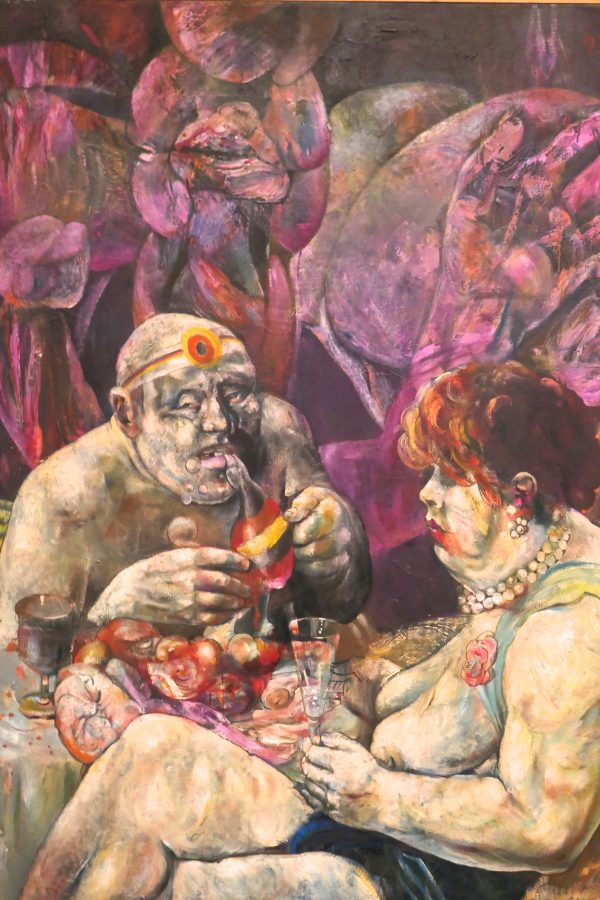 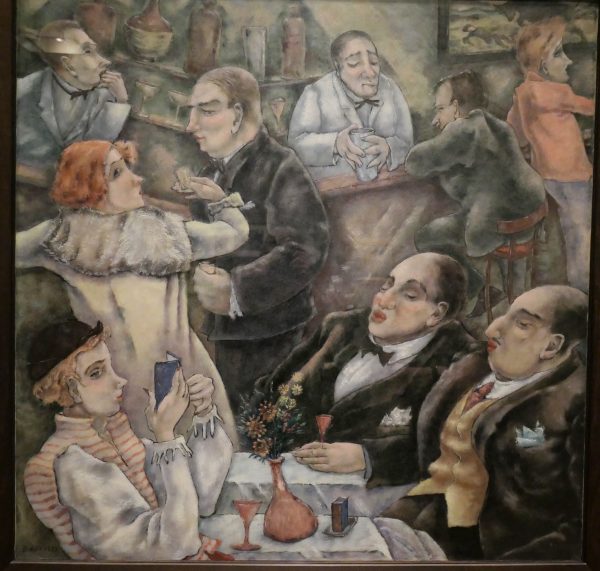 The mood, in turn, is strikingly different. And how could it not be? Modern Times reflects the optimism,  dynamism and daring of the American art scene of its epoch. Inventur, on the other hand, conveys the trauma, pain, but also resilience of German artists digging themselves, sometime literally, out of the rubble of the post-war years. 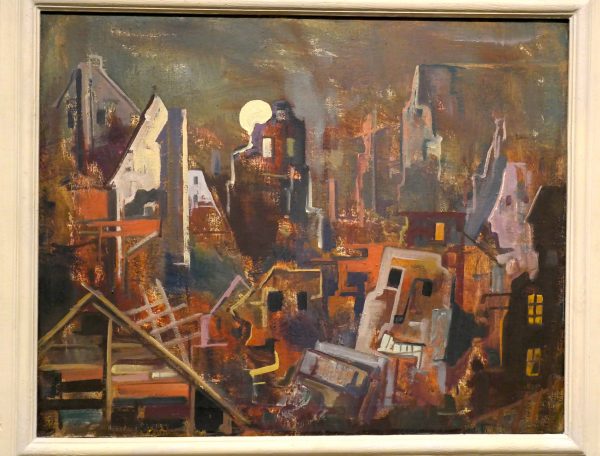 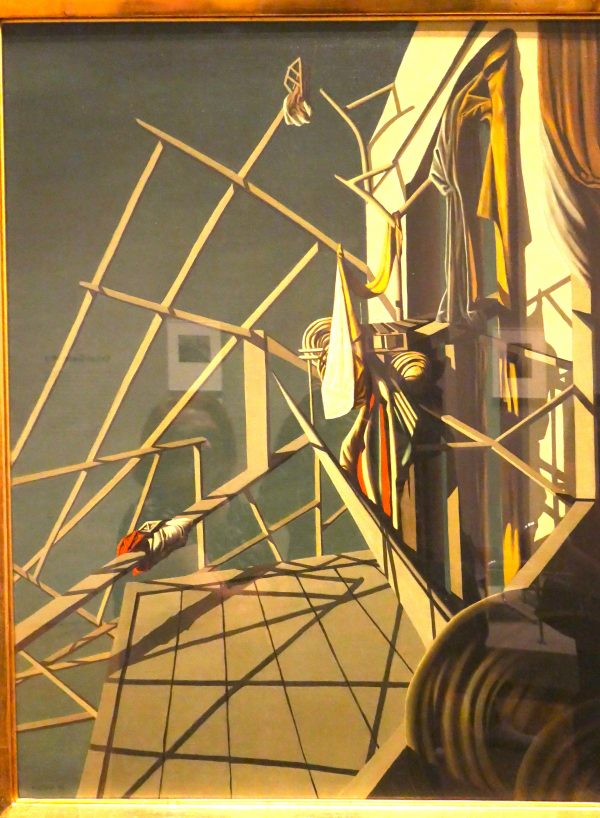 Both exhibits make room for experimentation, architecture, urban scenery and the race towards industrialization. 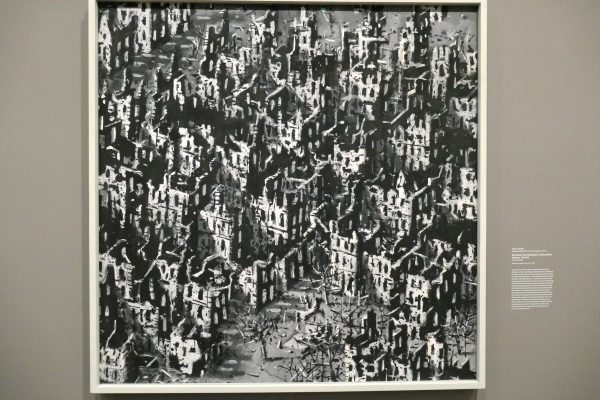 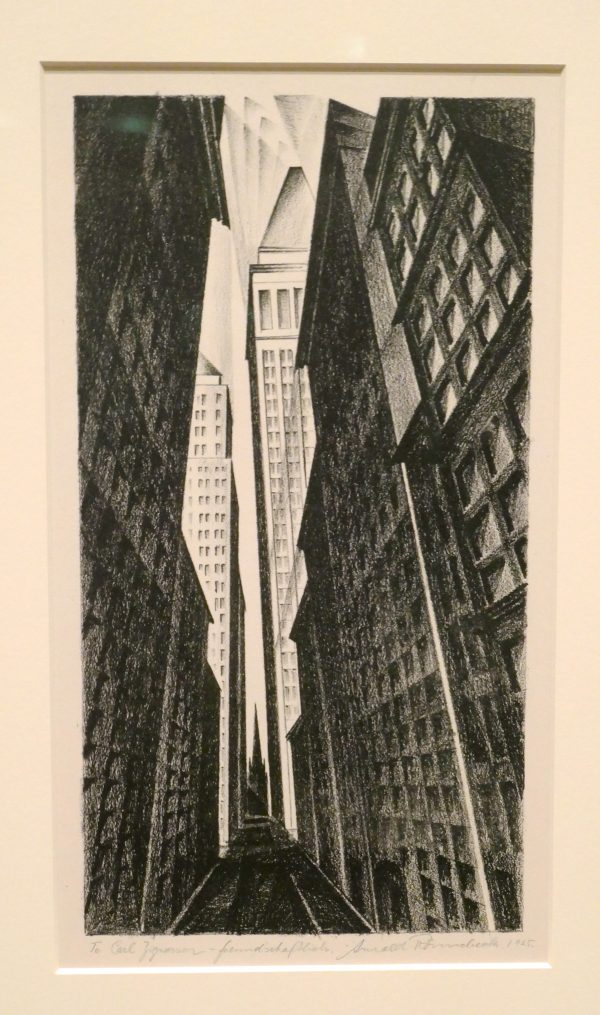 Both represent women artists, those known and those less familiar, including two of my favorite queens of subversion, Hannah Höch and Dorothea Tanning. 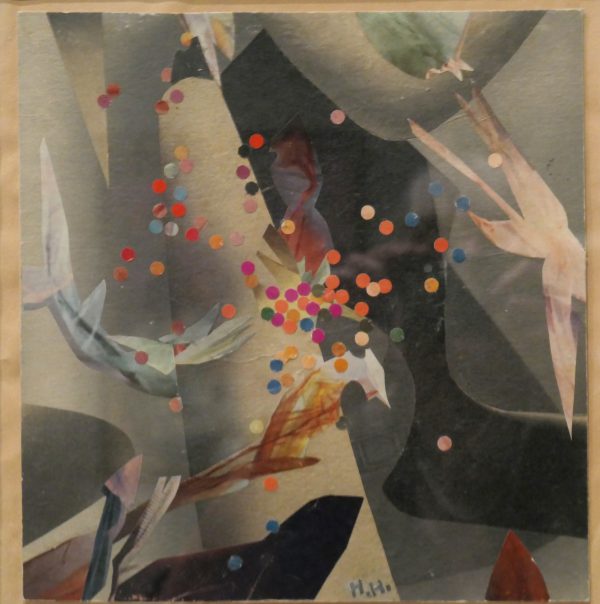 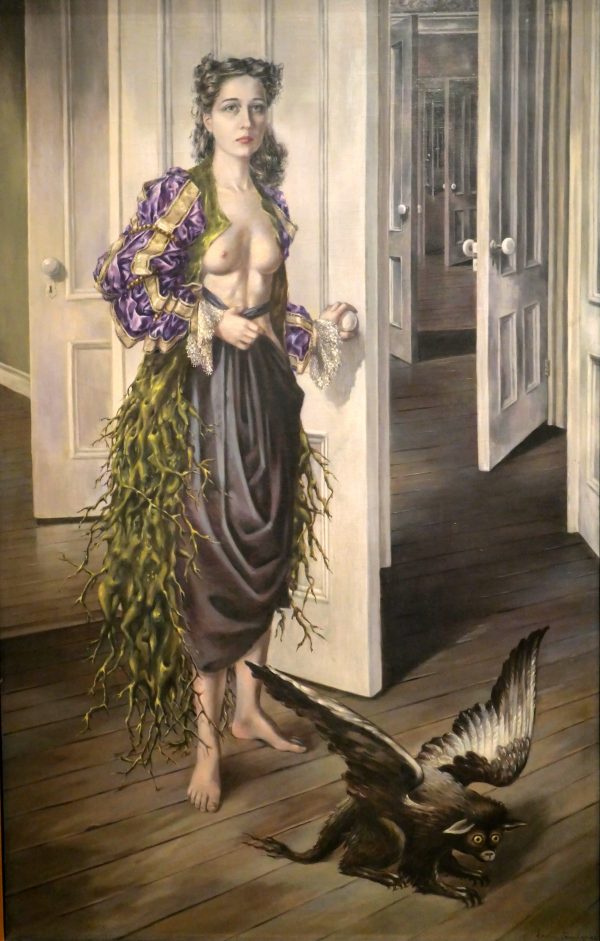 As someone who grew up in Germany during the the latter years covered in Inventur, I felt a stronger pull to the themes of that show: the artistic reaction to the horrors, destruction, fear, disbelief, and eventually hope of those living through the aftermath of the war in Germany.

The title of the exhibit (Taking Inventory) was borrowed from a 1945 poem by Günther Eich, which I am attaching in English translation.

This is a strange choice, to be frank. Eich, born in 1907, preached before the war that poets should not be political, and yet showed extreme conservative opinions in his scathing literary criticism of others. In 1933 he applied for membership in the NSDAP –– the National Socialist German Workers’ Party, or the Nazi Party –– but was rejected. He then produced some 160 radio plays that very much spoke to Nazi issues and values and were widely broadcast. After the war, he opportunistically claimed one had to be critical of the fallen regime –– and went on to be a celebrated writer, winning honors and awards, while he was considered by others to have been a Mitläufer, a Nazi hanger-on. To have this turncoat’s poem spearhead an exhibit of true dissenters is puzzling, to say the least. The power of the exhibit has you forgive this, however.

The visual works take inventory, indeed. They depict the destroyed landscapes, the vagaries of everyday life, the attempts to escape the post-war reality of hunger, illness and despair by either documenting the catastrophic conditions or escaping from them into fantasy worlds. There are also hints of the unquenchable desire to return to some kind of normalcy, to rebuild a sense of home and focus on things like modern furniture, car ownership and the like, to move forward. 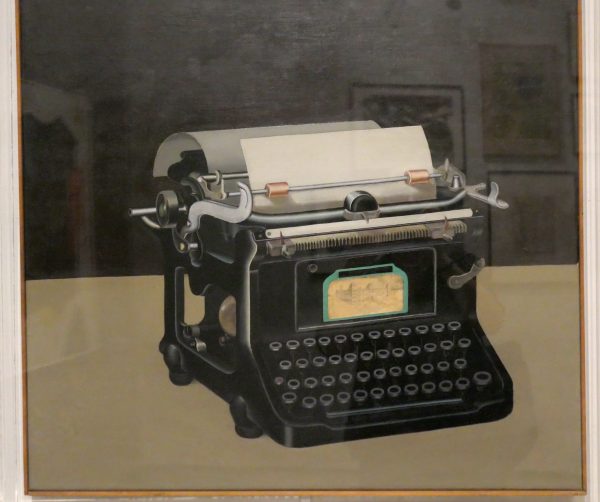 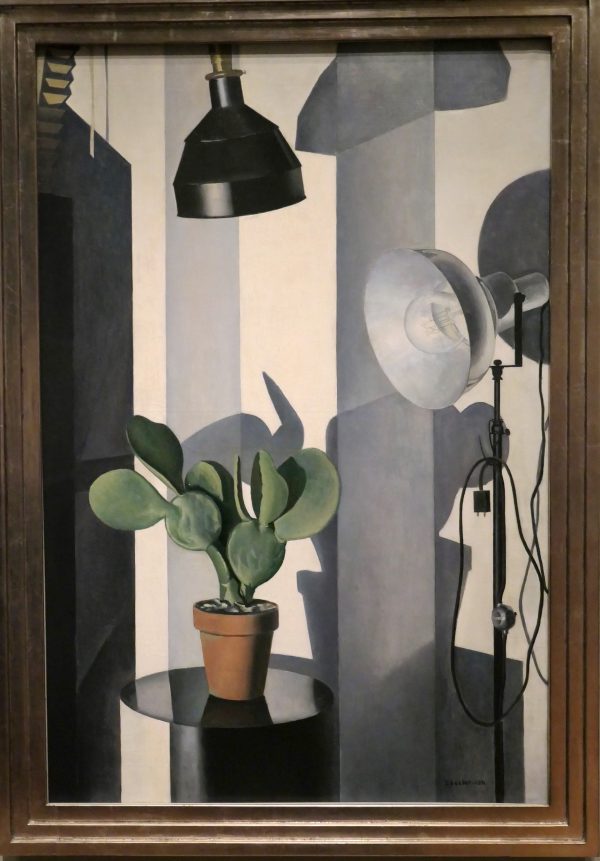 The curators note that the exhibit conveys not just an artistic, but also a physical and moral stocktaking of artists who stayed –– and were endangered –– during the Nazi regime and the hard years that followed, with a Nazi-indoctrinated public and critics trying to suppress their work way into the 1950s. I completely agree: Many of the paintings I saw were testimonials in the truest sense of a world destroyed by fascistic ideals and action –––something worthwhile to remember here and now.

Modern Times, in contrast, leaves you buoyed with a sense of energy. Where the German art made you hold your breath, the American exuberance makes your heart beat faster. Given the vast collection of the Philadelphia Museum of Art, it also allows glimpses of lesser-known artists beyond the panoply of the famous cohort.

In the end both shows pull off something extremely valuable: They evoke feelings without giving in to irritating pathos, and they link to critical thoughts about our past without yielding to nostalgia.

If you happen to be traveling to Boston or Philadelphia in the near future, I recommend you make time for a visit.

Portland artist and photographer Friderike Heuer is the author of YDP –– Your Daily Picture, which focuses on art, nature, and politics, and to which you can subscribe. This piece ran originally on YDP on Monday, May, 7, 2018.