Art on the Road: Slovenia

At first glance Ljublijana, the capital of Slovenia, appears to be one of the most picturesque, hospitable and laid-back places to be found in the Balkans. Situated near beautiful mountains, divided by a clean and slow-flowing river, the award-winning city prides itself for being “green,” both in the sense that it is shaded by trees and offers a vast number of parks and green spaces, but also in the sense that it has car-free zones all over the place, runs its buses on methane and has devised an underground system of garbage collection that leaves streets clean and encourages recycling (at one of the highest rates in Europe.)

The architecture is stunning for the perfectly restored blocks of art deco houses right next to baroque churches, all situated below a majestic medieval castle. The city owes much of its uniqueness to architect and city planner Joze Plečnik, who was given free reign in the 1920s to create a homogenous, distinct look for many of the city’s public buildings, squares, bridges, and market halls, their bright materials reflective of light and providing clean lines and a certain calmness against the huddle of the 17th century buildings. He also implemented sustainable solutions before anybody else talked about them. He was known to walk the city streets to create designs that focused on pedestrians – something the city’s current Vision 2025 plan is still following up on.

The city is simply beautiful, as long as one avoids the outskirts that are a prime example of ugly former socialist building practices, demanded by economic scarcity as much as political imperatives.

Ljublijana’s hospitality draws travelers from all over the globe, as do the various cultural programs, music and theater festivals, and museums that have much to offer. The town has a youthful vibe due to its large percentage of university students, and is a haven for graffiti artists in addition to puppeteers – there is a long history of puppetry in Slovenia, as can be learned in a funky little museum on the castle grounds. The only reason you don’t gain 10 pounds in 5 days from all the traditional, tempting food on offer is that you walk and walk to explore the various cultural sites that beckon. Having been part of Austria, Bohemia, Italy, and Yugoslavia at various points in time has made a lasting impact on the local cuisine. Pass the strudel, please!

The bright and cheerful surface hides the immense trauma that this city has been through, in all of it history, but particularly during the fascist occupation in the 1940s first by Mussolini in 1941, then by the Germans in 1943. The country was divided into three parts, assigned respectively to the Germans, the Italians, and the Hungarians; Mussolini was determined to cut off information and supply chains from Ljublijana to the partisans hiding in the surrounding forests, and decided to encircle the city with 30 kilometers of barbed wire, creating basically a prison for its then 80.000 inhabitants. Raids and executions were relentless – as were reprisals after 1945, when Field Marshall Tito and his comrades executed tens of thousands of people who had been collaborators of the fascists.

The political situation in the more recent past was complex as well, down to the fight for independence in the 1980/90s and the eventual partition of the former Yugoslav Republic into the various independent states that exist now, of which Slovenia is the most Northern and probably the most prosperous. It is now a member of the European Union.

Some of this history and the way artists work through it can be gleaned in the relatively new Museum of Contemporary Art Metelkova (MSUM).The modern structure opened in November 2011 and houses a permanent collection of Eastern European art, more than 66,000 books and documents in an extensive library and archive, and EVR, an E-Flux video rental that allows public screening on site of more than 1,000 works by 500 international artists. The second floor is dedicated to changing exhibitions.

A visit introduced me to the work of numerous Eastern European artists with whom I was unfamiliar. I will describe some of the photographic and conceptual pieces concerning politics in one way or another and not discuss the current group exhibit Heavenly Beings: Neither Human nor Animal, since I could make neither heads nor tails, feather nor fin of it, being loathe to enter a room that had, among other items, a lonely, live caged chicken surrounded by videos of screaming calves during slaughter and a series of photographs of a nude conceptual artist nursing, quite literally, a dog on her breast during an extended, isolated stay in some Berlin apartment. Blame the heat, my ignorance, or my advanced age, but the connection to art escaped me. Contemporary culture it shall be.

Two things were notable: a lot of the work presented is generated by collectives, or created by multiple artists in reenactment/reference to other works of previous artists, in often clever ways of homage and/or appropriation (something that seems to be en vogue all over Europe right now, at least on the evidence of the various museums I saw on this trip.) The MSUM venue struck me as the perfect vehicle to connect viewers to artists whose work was unavailable for many years due to the isolation of the Iron Curtain. With the appropriation work in particular, we get to know the work of early figures in Eastern Europe while appreciating contemporary artists from the same regions who have not yet made it into our Western canon. 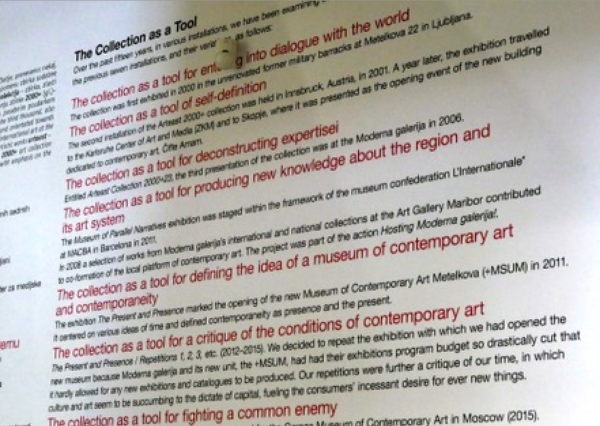 Secondly, the museum offers a detailed statement that reflects its political mission for its collection, a helpful guide to understand some of the curatorial choices I encountered.

Among the things I saw were simple documentation like Barbara Ćeferin’s photographs during the 1991 ten-day war for Slovenian independence depicting the actions of the New Collective putting up political posters all across town.

There was a staged series of photographs by Sanja Ivekovic linking the political situation under Tito to the role of women – in clever reference to art history’s many iterations of paintings of women on balconies, in their dual role of being held captive and being exposed, linking external and internal space.

Another series of images documented Györgi Galantai’s and Julia Klaniczay’s 1980 performance that recreated the composition of a sculpture by Vera Mukhina (Worker and Collective Farm Woman, 1937) by standing in a police-patrolled public square in Budapest, thus simultaneously deconstructing a Communist symbol and challenging the repressive forces.

I think I spent most of my time at the museum reading through a project concerning the Lives of Monuments. Art students, during a seminar on Art for Collective Use, went out to photograph the many Slovenian memorials relating to WW II that were built during the years of the Federal Socialist Republic of Yugoslavia and then wrote perceptive analyses that are offered to the viewer in conjunction with the images. Some examples are attached.

These are but a few works that caught my attention, but I think you get the idea. A visit opens up new horizons for all but those who have already specialized in modern Eastern European art history. And if the subject matter doesn’t draw you to a visit to the museum, the reading material of the guard (who did not look a day over age 17) in the exhibit halls should, if only to glimpse the intellectual nature of the art scene in Ljubljana. 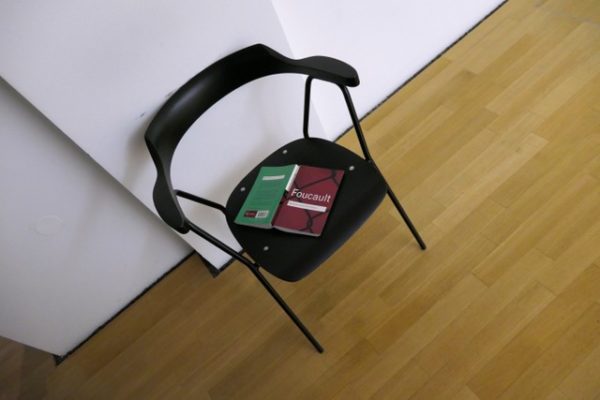