Art review: “Beyond Van Gogh” at the Oregon Convention Center

Immersive Van Gogh exhibits are all the rage in 2021. What do they offer viewers?

If I want to be an art critic who complains about immersive Van Gogh exhibits, I’m late to the party. The offerings have already been skewered in the press; the most common complaint likens the experience to stepping into a Van Gogh screensaver.

Is the experience like stepping into a screensaver? Yes. Is the account of Van Gogh’s life reductive and saccharine? Yes. Do I find the minimum $36.99 ticket price (plus $12 for parking) to be absurdly steep for what the experience offers? Yes. Does the soundtrack for this experience include (no joke) instrumental versions of Simon and Garfunkel’s “America” and Don McLean’s “Starry Starry Night”? Yes. Was the overstuffed gift shop an embarrassment, including among other things a t-shirt with a self-portrait of Van Gogh paired with a multi-colored wispy tutu? Yes.

Does any of this matter? No.

People are going to flock to this thing. When I looked up Yelp reviews of Van Gogh immersives in general and the specific iteration on view in Portland, the consensus from people other than art critics is overwhelmingly positive. The general gist is, in the words of one Yelp reviewer, “LOVED, LOVED LOVED.”

So if you’re going to go, at least go clear-eyed. This show isn’t about appreciating Van Gogh’s oeuvre. It isn’t about understanding fin-de-siecle European painting. This show uses those things to fashion a spectacle that sells tickets.

No one goes to Disney On Ice expecting to learn about Hans Christian Andersen or the Brothers Grimm. They go to Disney on Ice knowing that any narrative is tangential and has been tumbled and dragged through so much popular culture that the “show” bears little relationship to the original. They go because they appreciate showmanship and anticipate their kids being mesmerized. They know they’re signing up to spend two hours watching commercial excess née literature on ice skates. This is the same as that, except without the ice skates.

In the initial minutes of my conversation with the show’s curator, Fanny Curtat, she toed the party line. She signed on to be the curator for the exhibition because she wanted to “tell Vincent’s story” for people who “may be intimidated by a museum but want a connection with Van Gogh.” Curtat gushed about Van Gogh’s correspondence with his brother and explained that she wanted viewers to be able to “go beyond the darkness of the myth…and the ear-cutting incident.”

Curtat is charming; her French Canadian accent helps. If you’re interested in hearing her speak about the exhibition, definitely check out Dmae Lo Roberts’ episode of “Stage and Studio” from November 24.

I listened politely to Curtat’s enthusiastic spiel for a solid eight minutes before launching into the line of questioning that I wanted to pursue: How does she reconcile Van Gogh’s anti-capitalist sentiments with an unabashedly capitalist spectacle like “Beyond Van Gogh”?

Curtat, to her credit, didn’t miss a beat and responded that Van Gogh “wanted to be successful,” because he didn’t want to live off his brother, and while he did struggle, by the end of his life he was getting “traction” in the art world. She referenced an essay by the critic G-Albert Aurier written in 1889 that spoke favorably of Van Gogh’s work, calling him an “alchemist of color and a genius of light.”

Van Gogh as a struggling artist is part of the myth of the artist. He didn’t sell paintings during his lifetime, and only became famous after his death. The hold this has on the collective imagination is well-expressed in this clip of an episode of “Dr. Who” in which Van Gogh time-travels to see a gallery show of his work in the future. It’s emotionally manipulative schlock, but it absolutely works. I teared up. We want to see this artist understand how well his works are received today. The part about Van Gogh that isn’t as emphasized is the fact that Van Gogh wanted out of the buying and selling system entirely.

Van Gogh didn’t want his brother to have to support him, but moreso than having enough money to “be comfortable” or join the bourgeoisie, he wanted to avoid the need for money altogether. He wanted to be a preacher among peasants as a young man, and even after he abandoned that vocation, he consistently expressed sympathies with the proletariat. He made multiple compositions of workman’s boots (none of them made it into “Beyond Van Gogh”). He considered himself a socialist and longed to return to a mythic past of genuine social interaction and integrity. He endeavored to create an artists’ commune. He wanted to use his paintings as part of a bartering system.

In other words, I feel confident that a digital projection show of his paintings with tickets that cost at least $37 was not what he had in mind when he envisioned success. The closest I got to feeling like I was communing with the artist in “Beyond Van Gogh” was looking at the projection of self-portraits and thinking, “I’m so sorry.” Then the animation kicked in, the portrait blinked, and the spell was broken.

While Curtat may be the art historian on this project, I didn’t get the impression that she’s under the illusion that art history is the guiding force. The show is a collaboration among animators, projection artists, and investors and, ultimately, it is the last group that governs what gets “beyonded.”

There are seven or eight Van Gogh immersive shows circulating right now, precisely because Van Gogh’s work is overwhelmingly popular with the public interested in paying for this type of experience (and the paintings are in the public domain). The production company responsible for “Beyond Van Gogh” has already produced a second show that will be on view in Miami soon, “Beyond Monet,” not exactly an edgy follow-up.

Curtat called choosing which artists to focus a show on a “negotiation…we have to find a sort of middle ground between what the investors are ready to jump in for and what would be artistically interesting.” She suggested a Georgia O’Keeffe show, but the idea was turned down because the investors and producers “weren’t sure that the turnout would be the same.” Other possibilities that Curtat threw out in our conversation were Dali, Frida Kahlo, Francisco Goya, and Francis Bacon. None of these ideas were greenlit either.

Ultimately Curtat thinks that these digital immersive exhibitions will end up being thematic, similar to regular museum exhibits in which there is a theme and the projections feature the work of multiple artists. For this to work, the ticket-purchasing public would have to abandon our love of romantic biography and “easy” pretty pictures.

Some contemporary artists are already using similar technology to create installations. Refik Anadol uses AI to create room-sized installations. Portland’s Mobile Project Unit, founded by Sarah Turner and Fernanda D’Agostino, could do amazing things with this sort of budget and resources. I was even reminded of Ragnar Kjartansson’s The Visitors, and would be fascinated to see something like that work transformed into an even more immersive experience. Using the work of contemporary artists, however, would cut into profits. They’d have to pay the artists and, let’s be honest, these artists don’t have the same cache as Van Gogh or Monet.

I attended the press preview and then, a week later, I took my seven-year-old daughter. Our outings have been limited lately, and I thought she would enjoy it. We skipped the biography panels, weaving and cutting through the line of spectators who were taking in the selective narrative of Van Gogh’s life, and went straight to the projection room.

My daughter was mesmerized. Watching her wide eyes, I realized that to disparage this as a screensaver is to neglect the accomplishments of the animators, who genuinely did an excellent job. Her favorite part was what she called “the melting.” When the show is separated from Van Gogh, appreciated as a spectacle far removed from its point of origin, it’s captivating.

Swirling digital projections are almost as far from easel paintings as fancy-dress ice dancing is from literature (or even from animated film). Starry Night is 29 x 36 inches; most of Van Gogh’s works are this size or smaller. There are historical paintings that were meant to be immersive, Baroque ceilings for example, but the thrill of being engulfed or overwhelmed that these shows are predicated upon was never part of Van Gogh’s equation.

Curtat hopes that people will see this show and be motivated to seek out actual Van Gogh paintings in museums. This strikes me as a recipe for disappointment: the paintings won’t tower above the viewer; they don’t move, swirl, or melt into something else. The flashy exuberance of the digital eddies and fades is nowhere to be found in The Ox Cart at Portland Art Museum, even dramatically absent. There’s value in viewing a painting (even in reproduction) and there’s value in viewing digital projection art but it’s misleading to equate the two or claim that the latter enriches the former.

So go to “Beyond Van Gogh,” but don’t buy into the fiction that it’s a faithful representation of the artist, certainly don’t assume that it goes “beyond” any myth of Van Gogh. Go and either ignore the Van Gogh biography element altogether or go and appreciate the myth of Van Gogh as a contemporary cultural phenomenon, one that we created, fashioned, and honed based on what we want to see and believe.

What irked me about “Beyond Van Gogh” was the attempt at sincerity, the claim that the show was firmly attached to Van Gogh as a historical figure and his work. Freed of that weight, it was a perfectly lovely, albeit expensive, thing to do with my kid.

Even more fervently than Van Gogh wanted out of the capitalist system, he wanted human connection. Fifteen years of correspondence (all available online thanks to VanGoghletters.org) with his brother confirms this. So while I imagine Van Gogh would be nauseated to see his life story and struggles boiled down to a series of panels that hawk a sensationalized story, perhaps he would be heartened that 130 years later his paintings, though tumbled through the juggernaut of popular culture, created a spectacle that brings people together. He would still hate the tickets. 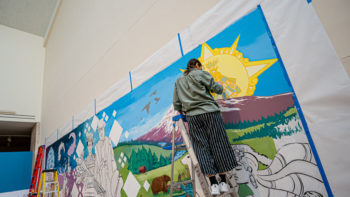 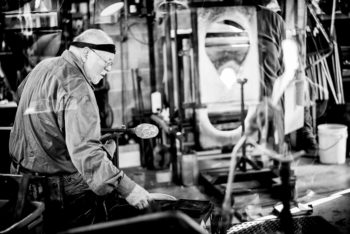