Dana Lynn Louis’s large-scale installations are affecting, altering the way viewers perceive and experience space. Many petrify the fractal ephemera of the natural world (root systems, raindrops, flowers, even patterns of sunlight) in man-made spaces using durable materials such as glass, metal, paint, silk tarlatan, sewing thread and fiber optic lighting.  In her latest project, Ripple Effect, Louis has instead enhanced an all too familiar feature of urban life, a chain-link fence, with printed photographs of water and sky.

Louis’s multidisciplinary practice has been documented and reviewed in Arts Watch, Sculpture magazine, Artweek, Glashaus (DE), Culture Now, The Willamette Week, and The Examiner. A fantastic article by Helen Hill was recently published in Street Roots, describing how Louis’s practices as an artist and activist intersect and inform one another. In addition to her studio practice, Louis runs a nonprofit organization called “Gather: Make: Shelter” (founded in 2017), which provides art-making workshops and art supplies to Portland’s unhoused residents.

With social distancing guidelines in full swing, “Gather: Make: Shelter” (GMS) has been forced to postpone its workshops. Louis, however, is adept at operating under material, financial and infrastructural constraints. GMS has joined forces with The City of Portland, the Joint Office of Homeless Services, JOIN (a nonprofit organization that helps people secure transitional housing), and 20 other organizations to aid in the construction of three temporary emergency outdoor shelters for Portland’s unhoused residents. Two of the sites occupy vacant parking lots on Water Avenue in Southeast Portland; the third is located in Old Town.

“One of the sites will prioritize people who identify as LGBTQ, another will be for people of color, and a third will be for a blended population including older adults, women, and people with disabilities,” reports Jonathon Levinson of OPB. Taken together, these temporary “villages” will provide 135 single occupancy tents (as well as sleeping bags, meals, showers, restrooms, laundry services, medical care and access to electricity) to the most vulnerable members of Portland’s population. Flipside Hat Company has donated hundreds of cloth masks to the camps, and a group of therapists have volunteered to conduct remote sessions with the camp’s residents.

The “villages” on Water Avenue are surrounded by industrial chain link fencing. Louis has designed a “privacy screen” to decorate the enclosure and to afford the camps’ residents more seclusion. The “privacy screen,” titled Ripple Effect, is made of a vinyl mesh material, printed with squarish photographs of tallowy and rose-colored clouds, bisected vertically by smaller, rectangular images of gently undulating wavelets. The collaged images substitute a filmstrip of sequential horizons for the single horizon-line which typically bisects a horizontal landscape or portrait.

Ripple Effect appears to represent a departure for Louis in respect to her chosen media. She rarely produces works of art using photography, save one spectacular project, Landscapes of the Inner Eye (2014). Louis’s drawings, paintings, sculptural installations and performance pieces are, however, often beautifully photographed for her archive. As an aside, my favorite works of hers are her intaglio prints and drawings (circa 2013), which depict concentric rings and octopoid shapes. They are, by some trick of compositional aptitude, simultaneously neat and knotty.

Who is Ripple Effect for? Is its purpose––as the designation “privacy screen” implies––to guarantee the camps’ temporary residents a little more protection from prying eyes? Or has it been erected for the benefit of commuters on Water Avenue who would prefer images of clouds and waterways to glimpses of the harsh living conditions of the unhoused community?

The significance of the project’s title, Ripple Effect, is tough for me to pin down. Is Louis literally referring to the wave patterns captured in her photographs? Or is she suggesting that initiatives to beautify a city will have a “butterfly effect” on its population’s well-being, regardless of whether those initiatives significantly improve the material conditions of their lives (as a universal basic income and affordable housing could)? Ripple Effect is, as are most of Louis’s titles, overdetermined and polysemous. They open themselves (and her art) to a multiplicity of interpretations.

On her website, Louis refers to many of her installations as “visual poems.” Perhaps Ripple Effect is meant to remind viewers of the unexpected windfalls life can send our way alongside its tribulations. Eyeing Ripple Effect from across the street, I was reminded of the restorative sensation I experience looking out at the sweeping blue horizon of the Pacific Ocean. Doing so has always reminded me of the unknowable occasions for wonder concealed in the ocean’s depths (let alone the infinite expanse of the universe, ceaselessly dilating in every direction). I was also reminded of Richard Serra (once referred to as a “benevolent social poet”), whose maximalist/minimalist public sculptures first lured me into the art world when I was just a sophomore in high school. Ripple Effect is big and eye-catching, but it’s by no means monumental.

It seems to me that Louis (to her credit) could care less about retaining or accumulating cultural currency among the art world’s elite collectors and institutions. She’s too busy trying to share resources, beauty and expertise with members of her community. Is Ripple Effect bringing Portland’s unhoused residents security and shelter? Physically, yes (although only in conjunction with the other essential services provided by the “villages”). But it may also be providing them with some modicum of spiritual nourishment. Having art made for or about you can be a profoundly pleasurable and uplifting experience. Much has been written about fine art’s gift for inspiring introspection, but this is a work of public art which performs a tangible public service. As I drove home, all I could think was: It’s doing way more than I am –  art-induced self-reflection in action. 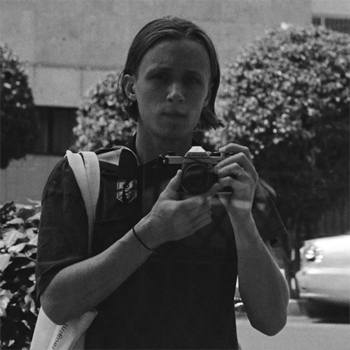 Sebastian Zinn has a B.A. in Comparative Literature with an allied field in Art History from Reed College. Since graduating in the Spring of 2018, he has been working as a freelance writer and editor covering a diverse range of topics, including economics, medicine, food, music, literature, film, fashion and visual and performance art.