TODAY I’M GETTING A JUMP on the time-honored practice of serving leftovers after the Thanksgiving feast. ArtsWatch first published the brief essay below on November 22, 2018, and three years later, it seems worth a second helping. Yes, things are different. Tthe world’s changed. The outrages, heartbreaks, and ambitions of a cloven culture have shifted, if not in ferocity, at least in detail. And the large pre-Covid communal gatherings around Thanksgiving tables might be smaller and more intimate this year, for safety’s sake. Still, some things endure:

IT’S THANKSGIVING, AND I HOPE, if you’re reading this, you’re giving yourself a little break in your day: waiting while the sweet potatoes are baking, maybe, or pausing before you pack hot dishes in the car and head out to break bread with friends. It’s a day for friendships and family and connections. And a day for rituals. We all have them.

One of mine is making the cranberry sauce, which I do two or three days in advance so the flavors meld and settle. My method is both improvisatory and familiar. Take a good-sized orange, peel it well and scrape off all the pith, dice the peel small and toss half or two-thirds of it in the pot. Cut the orange itself into slightly bigger chunks; add them and the juice. A generous dash of nutmeg, half a cinnamon stick, no more than half the amount of sugar that recipes generally call for: a satisfying sauce calls for a touch of sweet, but as with rhubarb, if you don’t like the tartness, why are you bothering? A little water to give the thing some liquid, stir and boil, add the fresh berries and cook ’em until they pop.

Well, that’s one way. That’s one tradition. And Thanksgiving’s very much about tradition.

Traditions, of course, cling to the past, but they can also shapeshift as the world spins forward. I remember first seeing, as an adult, Plymouth Rock, that magical storybook landmark of American childhoods, at least before this century, and discovering both how small the remaining rock is, weathered and winnowed and broken through the centuries, and how it’s fenced in for protection: an apt metaphor, or so it seemed, for the state of what the myth of it’s supposed to mean. I had long learned by then of the narrowness of the Pilgrims’ worldview, and the daunting future for the Wampanoag peoples who had met them and fed them and helped them through their first harsh winter, and of the continent-spanning truths of the matter in Edmund Wilson’s famously necessary Apologies to the Iroquois.

And yet, there was – is – thanks. And it is central, or so it seems, to what we loosely call the cultural life, which somehow involves seeking out both the good and the true, however good or bad a truth may be, and then finding the sweet spot in that often uneasy balance. Thankfulness is not so much about a day as it is about a way of living, a way of approaching life’s often harsh and thorny mysteries. I’ve been reading The Zena Sutherland Lectures, 1983-1992, a collection of essays by prominent children’s authors including Maurice Sendak and Bridge to Terabithia‘s Katherine Paterson, and in it the fine writer Paula Fox observes that we “can turn to great poets, great writers, to help us speak of life, of its mysteries.” Great musicians and dancers and actors, of course, too.

A little earlier in her essay Fox writes, speaking of some students she had had when she was a tutor at “an institution for neglected and dependent children,” most of whom had come from poverty and some of whom had experienced terrors: “What do pessimism or optimism have to do with Richard, who lived his childhood, day after day for six years, in a concentration camp? With Gloria, Danny, and Frank? With Peter? With these living presences, immanent with human soul?”

Sometimes giving, the sharing of a story, matters deeply. It is often through the sometimes difficult generosity of the cultural life, the willingness to confront and explore and understand such lives and circumstances, that we prompt action and move the world in ways large and sweeping or small and personal. And if we don’t, why are we bothering?

We make a great deal in the arts world of the distinction between professionals and amateurs, but it often seems to me that the truer and more important distinction lies in the degree to which artists, no matter their level of technical prowess, give freely to the world of what they have, and use that gift large or small to help pry open the mysteries and the adventures; to embrace a broadening concept of community as the world shrinks; to create a larger table for a more varied and sustaining and convivial feast. It’s that spirit, in art and life, for which we give thanks. Thanksgiving is, I think, a humbleness in the face of the universe, and to that I’ll raise a toast. Happy Thanksgiving to you and yours.

STAGE & STUDIO: EXPERIENCING “BEYOND VAN GOGH.” In her newest podcast, Dmae Lo Roberts tours Beyond Van Gogh: The Immersive Experience, the step-into-the-picture touring extravaganza at the Oregon Convention Center, with art historian Fanny Curtat, one of the show’s consultants. Their conversation ranges from Starry Night to the lopped-off ear to the magic of Van Gogh’s light and colors.

SIMONE FISCHER AT ASTORIA VISUAL ARTS. Kyle Cohlmia reviews Fischer’s solo show OFFAL, which the artist refers to as an exercise in “the poetics of iron” and which, as Cohlmia notes, is centered on food – “more specifically, on the un-food or waste product found in today’s agriculture.” The title, Cohlmia also points out, is a homophone for “awful,” a reflection on “the ethics of our current food economy.”

ANYA ROBERTS-TONEY AT NATIONALE. Jennifer Rabin, reviewing Roberts-Toney’s show If She Floats, is taken by “the pleasure of seeing an artist in process.” The exhibit isn’t an end, but a stop along the way. And a fascinating way it is: Roberts-Toney’s title refers to “the swim tests given to women suspected of being witches through the end of the 18th century. If a woman floated, she was proclaimed a witch and burned alive. If she sank, she was absolved, though many women drowned during the test.”

THE MANY MUSICAL FACES OF STACEY PHILIPPS. Bennett Campbell Ferguson has a conversation with Philipps, the Oregon choral composer  who’s “composed pieces about everything from the trauma of the Salem Witch Trials to the transcendent beauty of snow,” and whose musical influences range from Brahms to the Beatles and Talking Heads to the Eagles: “I swear I learned how to sing harmony to the Eagles.” Philipps, who sings in the alto section of Oregon Repertory Singers, is also composer in residence for the group’s Youth Choir.

PORTLAND TIME IN GRAMMY TOWN. Grammy nominations, those good-as-gold nods of achievement in the musical recording industry, came out this week, and a couple of Oregon musicmakers got prestigious nominations:

TAMING THE FRENCH HORN: RADOVAN VLATKOVIC AT CHAMBER MUSIC NORTHWEST. Anyone who’s ever attempted the instrument knows how tough it is to tame – and how rewarding it is to listen to a performer who’s not just tamed it, but taken it to the heights. Angela Allen, reviewing a CMNW concert at the old church in which pianist Gloria Chien and violinist Soovin Kim joined the outstanding Croatian hornist, recounts the pleasures of it all.

WEEKLY (P)REVIEWS: WHAT IF? Robert Ham casts his weekly gaze on what’s about to happen and what’s recently gone down in the music world. This week: Mia Pixley brings her cello to the Newmark Theatre; James Powers jams his birthday at The 1905; HANiF dishes disses at Georgie’s.

FILMWATCH WEEKLY: “HOUSE OF GUCCI” SERVES UP LUXURY AS ONLY HOLLYWOOD CAN. “Around these parts, we like to champion scruffy independent movies,” Marc Mohan writes. And yet, sometimes big-budget Hollywood pulls through. Lush, lively, and luxuriant, Ridley Scott’s high-fashion tale, Mohan declares, “walks a tightrope between campy nighttime soap and insightful true-crime drama with nary a wobble.”

… and a closing toast to Betty White

A PORTLAND AUTHOR’S FEMINIST HISTORY OF BETTY WHITE. There’s not much you can get a majority of U.S. citizens to agree on, but most people, it seems safe to say, are pretty partial to comedian and television star Betty White. Sheer longevity might have something to do with it: If it seems like White’s been around longer than sliced bread, she has. Sliced bread, as Amy Leona Havin notes, was first sold in 1928. White was born January 17, 1922 – which makes her almost 100 years old and counting. Havin’s conversation with Portland author Paula Bernstein, whose book How To Be Golden: Lessons We Can Learn From Betty White has just come out, reveals that White has provided America with much more than several decades of reliable laughter: She’s been a trailblazer for women in television, tough when she needed to be, paving the way for multiple generations. And always, with that familiar comic touch. “In a way, 2020 was such an odd year to be writing an inspirational, upbeat book,” Bernstein tells Havin, “but ultimately, I think it’s good timing in that we can all use some smiles.” That seems worthy of giving thanks. 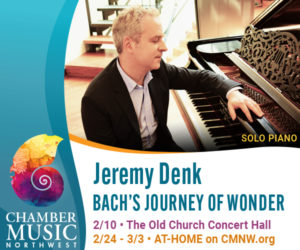