Boom! Arts from the edge

Essay and photos by FRIDERIKE HEUER

In times of political change and upheaval the arts often undergo a paradigm shift. New ways of representing the world or challenging the status quo rise out of despair or are driven by hope. This is true for the visual arts but perhaps even more so for theater. In Germany, my country of origin, for example, the era between the two world wars saw an enormous shift towards the use of theater as an instrument for social change. Famous innovators like Erwin Piscator and his Proletarian Theatre envisioned performances that would make people more thoughtful, and help them consider their social environment more critically. Live performance would encourage members of the public to analyze what was going on around them rather than making them react purely emotionally to a particularly beautifully written or produced play. In Piscator’s eyes the purpose of theater was to tell the truth and awaken consciousness for the truth in the audience, which might pave the way towards political action.

Piscator’s productions, which influenced his eventually much more famous compatriot and colleague Berthold Brecht, were geared toward audience involvement: He hoped for a modified version of the ancient model of the Greek stage and its public, making theater once again central to community life. His working-class actors often played without a stage, costumes or lighting, in neighborhood meeting halls or industrial barracks, encouraging conversation with the audience. His politics did not sit well with the rising totalitarian regime, and he eventually fled into exile, working, among other things, at the New School for Social Research in New York before eventually returning to Germany after the war.

I was reminded of all this because I sat down with Ruth Wikler-Luker recently for a conversation about Boom Arts, the performing arts organization she founded in Portland about six years ago. I have been volunteering to photograph for Boom Arts for a number of those years, but had never had the opportunity to satisfy my curiosity about the organization and its producer in more detail.

Boom Arts has a trio of events coming up in the next several days:

The obvious questions to ask were about what Boom Arts does, what it hopes to accomplish, and how its members go about it. What I was really dying to know, though, was how someone can have the chutzpah to open yet another tiny nonprofit organization in a small city with limited audiences, resources, and attention span amongst a field of other theater companies – not exactly the paragon of sustainability. As luck – and a curator very generous with her time – would have it, I got replies to both of those questions. And then some.

As it turns out, the answers are intertwined. Boom Arts’ mission is to bring global, provocative, and relevant theater and performance to town. Well, you could have inferred that from simply reading their website, which also links to a mission statement that provides more detail.

The relevant point, though, is that they are bringing the work in: They are presenters, not producers. Hiring touring acts that have been developed and finely honed elsewhere allows contact with artists who come from very different backgrounds, artistic traditions and countries. The fact that Boom Arts does not have a venue also relieves it of the responsibility for having to maintain a space and to program with an eye on filling it. This permits programming that can be truly eclectic, speak to many different issues, and create opportunities for diverse sections of our community to be part of the enterprise. Programming that more often than not has political ideas at its core.

One of the main aspects of Boom Arts is its absolute focus on the interaction between artists and audience, which extends beyond the performances per se, creating networks or participation from the community at large. This helps distinguish Boom Arts from the many other terrific companies in Portland. Other than PICA (which covers the contemporary art world rather than popular culture) and White Bird, which brings in dance companies from all over the world, no other group is as globally connected in its programming, or allows for such diversity of encounters with people we would not necessarily connect to otherwise.

Of course there are drawbacks to being a presenter. The biggest challenge: if you have performers in town for a short run (an average of three performances or so) they are gone by the time enough buzz has developed to draw the public into the house. If your physical location changes depending on what venue is available or matches the needs of each show, people might not be adventurous or flexible enough to follow you and explore new sites (and deal with parking, given our limited public transportation). The lack of a continually visible presence across a season might hurt in light of the fact that Portland is already crowded with possibilities when it comes to deciding what to do with your free time. The mountains and beaches beckon. So does the restaurant scene. So do the various established venues, of which there are so many.

Having identified a niche for political performance, then, but also assessed the constraints and challenges in the local landscape, who would dare to build something different and exciting basically from scratch? Let me introduce you to Boom Art’s heart and brain (not necessarily in that order,) curator and producer Wikler-Luker. The first impression is that of a woman whose vivaciousness borders on exuberance and whose smile could light up a room during a blackout.

On second encounter you realize that her passion for what she is doing is matched to a T by her intellectual acumen and her grounding in solid historical knowledge and all things theater.

If you ask her what it is she does, be prepared for a long answer. She sees her role as “performance curator, as a connector, a matchmaker, a generator of cultural activity, a creator of opportunity for the arts to catalyze change.” That leaves out the fact that she also does the fundraising, some administrative work, the networking, the exploratory travels to find new acts to bring here, hosting the artists, renting the venues, and raising a family. Dizzy yet? Wikler-Luker is the first to acknowledge that she is lucky to have a diverse, generous and active board in support of her work; engaged boards make a huge difference and should not be taken for granted. Three other talented and efficient colleagues work now at her side: Molly Gardner, who is responsible for tech support; Katie Watkins, associate producer; and Anya Pearson, who tackles development and community outreach.

After growing up in Madison, Wisconsin, Wikler-Luker went to college at Barnard where she majored in history. A class taught by historian Eric Foner opened her eyes to the possibility of politics infusing theater. A grant allowed her to travel internationally (I’m sure speaking several languages helped…) to seek out traditions of radical theater; during a stay in Colombia with the San Francisco Mime Troupe she had a life-changing experience: She encountered a political street art circus from Germany. The rest was history. She was hooked by the circus aesthetic, the risk-taking, the physical rigor combined with a progressive message. Wikler-Luker subsequently attended the Circomedia Circus school in Bristol, England, and got an M.A. in history from Hunter College. Not surprisingly, her thesis was about agitprop theater during the Spanish Civil war. She founded a circus of her own that performed pieces derived from Tales of Hoffman, Whitman’s Leaves of Grass, and 16th century drawings by Peter Brueghel depicting the horrors of war.

Working as an administrator in international arts exchange and later as associate director of programming at City University of New York’s Theatre Institute helped her establish relationships that are sustaining her work to this day. The red thread running through her variable past and informing what Boom Arts is all about these days is the passionate belief that live performance can be transformational: that there is power in the audience-artist encounter that is rarely found elsewhere. Having live presenters on stage from contexts that are not necessarily the norm for a somewhat homogeneously white, comfortably middle-class audience like Portland’s is indeed harking back to what I described at the beginning and to which I see this organization as an heir – a century-old tradition in theater that attempts to make us think, repair our insularity, make us experience a reality that we are not always exposed to and serve as a call for activism.

Making it work is a different question. One of the challenges, as I mentioned above, is to draw enough support from the community to be sustainable. That means people actually coming to performances even if these stretch our comfort zone; it means generous giving; it means supporting ways to grow that go beyond the incremental steps of success that have certainly marked Boom Art’s development so far. It means us, people.

Two facts make me optimistic about Boom Art’s future: for one, the programming has gotten increasingly exciting, providing terrific entertainment without sacrificing ideas. This is partly true because even renowned touring artists are actually eager to come to Portland. They might be attracted because of Portland’s standing in popular culture, or personal connections, or the fact that Wikler-Luker is a hands-on networker who establishes connections to a community that is close to the artists’ focus. The fact remains that they do happily agree to perform in town, and by their own self-report thrive on the connectivity. 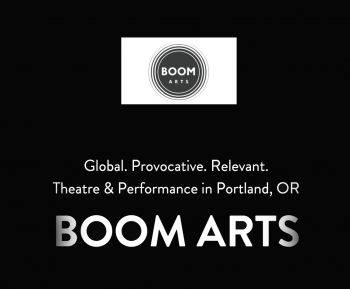 Secondly, Boom Arts is doing research into new streams of programming that would serve a broader and more diverse audience, with a focus on families and children. The hope is to bring outdoors performers, street art, and progressive circus acts into town. The relevant city bureaus show inclination to be on board, and I can only imagine the impact a modern street circus would have: pleasure for an audience of all ages and visibility and increased staying power for Boom Arts. It is an exciting development if it can be pulled off.

My thoughts, then: Break a leg, folks! We need you.