Silencio Blanco understands that you can do a lot with a little. The Chilean theater group works with silent puppets, simple constructs of paper, chopsticks, and masking tape to tell deeply empathetic stories. Portland audiences will be able to see its work Pescador/Fisherman at Imago Theatre the first two weekends of February as part of Boom Arts’ “Festive Revolutions” season.

The group didn’t set out to do puppetry. Co-founders Dominga Gutiérrez and Santiago Tobar were students at the Theater School of the University of Chile and interested in questions of acting and expression. Puppets, they discovered, provided a good way to explore the questions.

“Puppetry is a way of looking at acting,” says Gutiérrez, who at the time was new to the form. “The performers put themselves at a distance from the audience, expressing themselves via an ‘other’ that doesn’t even exist.” She and Tobar became interested in how to give the puppets authentic motions: “We wanted to convey story and history of a character only through movement.” That’s why the puppets are unadorned. Costumes inhibit the puppeteer’s control.

From that beginning the group grew in number and scope, adding a couple more members and a sound person. Its work Chiflón, the silence of coal, which Boom Arts brought to Portland in 2017, examined the lives of coal miners.

“Portlanders were absolutely rapturous about Chiflón,” says Ruth Wikler, Boom Arts’ curator. Silencio Blanco, she added, was “beginning to build Pescador at that time. Everyone in Portland who saw Chiflón and heard about the next project was eager to welcome them back. I am pleased that members of the national network of presenters who came together to make the first tour happen came back together to make this one possible.”

From mining, Silencio Blanco turns its attention in Pescador to the industry of small-scale fisheries. “We wanted to explore the challenges and the beauty that come along with that,” says Gutiérrez. Pescador follows a fisherman through a day, but the play is about more than that. “It’s about the challenges of that life, the beauty of nature, and all the things that are happening in every moment. We want the audience to be part of that day, not just watch it.” While the group works on a large scale, the show is centered in the bodies of a few puppeteers onstage. It takes three people to operate the puppet; two others manipulate the boat and the environment.

To create Pescador the group traveled to fishing towns along the coast of Chile, interviewing people in the communities and spending a little time on some boats, before returning to Santiago to create the work. When they were finished they returned to those communities, some of which had never held a theater performance of any kind before, to perform the show.

“We were nervous about the audience reaction,” says Gutiérrez. “But the audiences dropped their jaws. They couldn’t believe that someone would make art about their lives. It was very beautiful.”

“Art cannot be not political,” Gutiérrez declares. “It’s political to perform through silent puppets the stories of people who are being silenced and marginalized by society. Coal mining and fishing are historical trades in Chile but they’re undervalued.” The company’s work doesn’t focus solely on the actual labor of these individuals, but also on the communities and roles that surround tradespeople: “These are everyday stories. To bring them on to the stage is to recover heritage that has been marginalized.”

One of the advantages of working with puppets, the group members find, is that the work translates effortlessly. This U.S. tour has Silencio Blanco stopping in Chicago for the Chicago Puppet Theatre Festival; Portland; and finally, Maryland. “Our work is about human sensations,” says Gutiérrez. “It’s not dependent on where the audience lives. Even in Chicago, where people might not have a relationship with the ocean, everyone has a relationship with storms. With the wind.” The blank mute puppets allow the audience to ascribe whatever meaning they want, no matter where they come from.

During its time in Portland Silencio Blanco will be also be preforming in schools thanks to a partnership between Boom Arts and Young Audiences Inc., and leading a puppetry workshop for families at the Gresham Library on February 6. The group does a lot of shows for young audiences, as well as outreach, but don’t see doing projects specifically for children as its main goal. “We’ve done workshops for adults and professional puppeteers and actors,” says Gutiérrez, “but the best audience is a mixed audience. The puppets permit the adults and children to relate to each other in a new way. The codes of age, culture, and class break down.”

“Chiflón managed to conjure Greek-level epic tragedy into a wordless hour featuring three vaguely figurative puppets,” says Wikler. “In Pescador, Silencio is exploring the physical relationship between puppeteer and puppet, making the choreography of the puppeteers truly amazing to watch – so I’m excited to open our audience up to multigenerational and youth audiences, and to see what kind of dialogue that audience mix invites.”

Boom Arts’ presentation of Silencio Blanco’s Pescador plays Feb. 2-9 at Imago Theatre, and the group will make other community appearances during the week. Ticket and schedule information here.

TJ Acena has been covering Boom Arts’ 2018-19 season from inside and out for Oregon ArtsWatch. His previous pieces in the series: 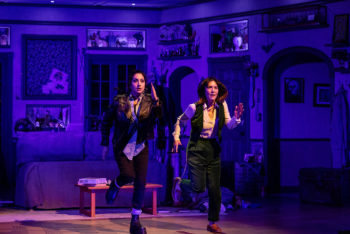 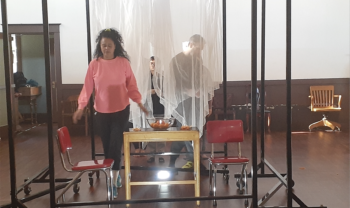