Story and photos by MATTHEW ANDREWS

The spare music starts up, scales and single notes slowly traversing the speaker array around the room. A vast drone-hum like an industrial air-conditioning unit rises up almost subliminally and suddenly shuts off, weighty in its absence, leaving silence in its wake, like the passing of a whale.

Bridgetown Orchestra Artistic Director Tylor Neist is nothing if not ambitious. Two years ago, the composer took us to outer space with his multimedia spectacle The Overview Effect. Previous years have seen scores for Lear and Kabuki Titus (both for Bag & Baggage), a string-quartet-plus-electronics piece for Fear No Music, and the formation of piano trio ThreePlay.

This year’s grand, complicated endeavor: On Being Water, an ersatz-immersive experience on aquatic themes, hosted at Hillsboro’s Vault Theater over Labor Day weekend, performed by Neist alone on a small ensemble of machines. 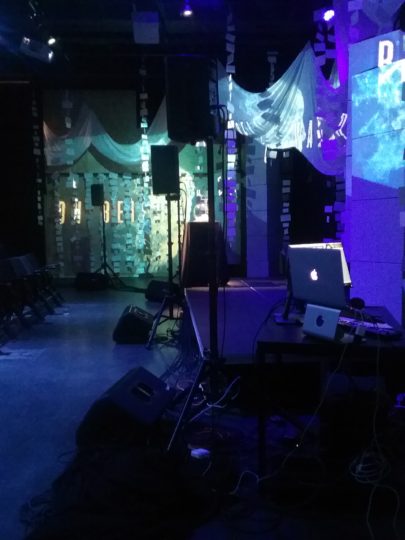 “You might suspect there’s not a 50-piece [Bridgetown] orchestra behind me,” Neist said with an ironic smile when introducing his show. He explained the absence of the planned, expected, promoted string quartet: “We found that using a live string quartet didn’t work so well.” So Neist recorded them separately and loaded them into his machines. “They’re in my orchestra right there,” he said, gesturing to the bank of MIDI keyboards and desktop computers. It wasn’t the production’s only technical difficulty: at some point designer Benjamin Read pulled out of the production, and Thursday’s opening night performance had to be cancelled when the sound system refused to properly send those pre-recorded string sounds through its 32 speakers.

After a few minutes it becomes evident that this music isn’t going to go anywhere: there will be no harmony, no melodies, just a swirl of vaguely tonal, vaguely minor, vaguely classical soundscapery. I jot in my notes, “terrible pun—watered down JLA.”

The Vault—formerly a bank, naturally—is a small space, a black-box theater sort of room comparable to CoHo. A central square of folding chairs; four bare walls, extending to bare rafters and ducts above; a raised stage up front, nothing on it but an inexplicable glass bowl. (Perhaps it’s for tips? Or maybe it’s for leaving your business card and winning a free lunch).

Neist had decorated the space with an array of projectors and a scattering of white surfaces for his oceanic imagery to be projected upon: big white boxes, five stacks, four high; a busy perimeter of dangling strings, festooned with blank white paper squares; white cloth drapes suspended hauntedhousely from those rafters.

Over those white planes, some kind of geissian digital video collage, rivulets of sound and images cutting across physical and acoustic planes more or less at random, generating cross-currents in the audio-visual stream. The visual themes come in a series of discrete, very long sections. In one, it’s bubbles going up and down like Tomorrowland’s submarine trompe-l’œil. In another it’s all random debris and eggy translucence, then rippling luminescence, all of a sudden dense lines falling like sleet, jagged ice on hard edges, angular folds of hanging fabric, frozen deco ridges, curvilinear light paths and gossamer pearline strings of ghostly effervescence.

The lack of boundaries between audience and stage and set, the immersive nature of the multimedia presentation, the intimacy of the little theater with its chairs and wires, bespectacled composer bent over glowing-apple-backed Macintosh—all washed together the liminal space between creator, performer, stage, and audience. In Neist’s words, On Being Water is about “bridging inner and outer worlds, old and new traditions.”

Before beginning the performance, he left us with: “Water has an unbelievable ability to carry metaphors. Find that deep place and enjoy the sounds.”

Music and sounds intersect, a sparse but multifaceted electroacoustic soundfield, burbling water sounds, wind and distant thunder (accompanied by a neat lightning effect I wanted more of), a constant tidal sound that could just have well been the rushing of blood behind my ear canals, as John Cage is supposed to have heard in that mythic Harvard University anechoic chamber (his blood, that is, not mine).

To call the music minimalist would invite unfair comparisons with Young, Riley, Glass, and Reich; Neist’s unmoving music here was a lot closer to John Luther Adams and Morton Feldman. Part of me gets a little offended to hear music treated this way, deeply frustrated by the non-directional anti-harmonic amelodicism that resolutely refuses to go anywhere, that treats notes and scales as mere effluvium adrift in experimental-multimedia-interdisciplinary whatsit. 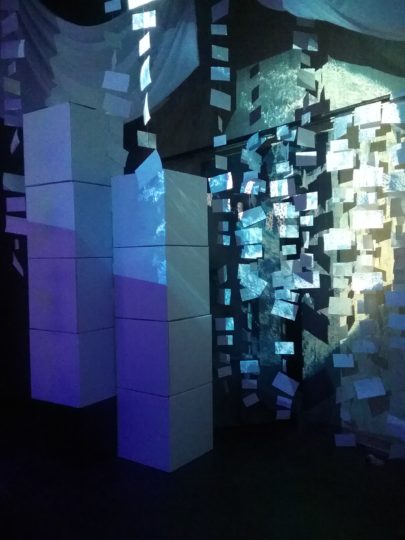 It’s not that it’s bad music—many moments were quite good—and it should be noted that Neist doesn’t always compose this way. His one-man, looped-violin Lear soundtrack is dynamic, compelling, expressive (in many ways exactly what this score was not), the quartet he composed for Fear No Music gets fairly Reichian at times, and the music for The Overview Effect is quite Harrisonically vibrant and colorful. And, let’s not forget, this is all experimental theater music and therefore fundamentally incidental and predicated on non-movement; as with Third Angle’s performance of Sarah Hennies’s similarly static Contralto two weeks later, the music wasn’t the sole or even necessarily the most important element.

The show ends as abruptly and unceremoniously as it started, hinting perhaps that it could have gone on forever—as indeed it could have, never having really gone anywhere in the first place—but the timeless quality Neist was presumably going for hasn’t really come across.

I might have enjoyed On Being Water if it had been truly immersive—with more fully realized decor. Or more comfortable seats. Or additional speakers positioned under and over the audience. Or with the richer acoustic environment produced by live instruments (maybe even provided by Neist, a fine violinist himself) engaging with the space as well as with the speaker array. The music would still have been uneventful, which is not always a bad thing (but does become tiresome when it’s one of several incomplete, inchoate elements). 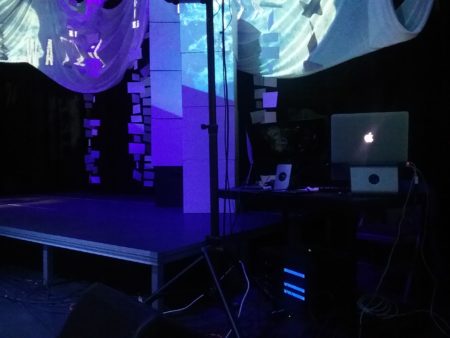 But it was a bold and interesting experiment, and I’m glad I got to experience it. The whole affair was a little like a difficult float in an isolation tank: usually it’s pure bliss, but every now and then you get a little salt in your eye, or a bit of sound leaks in from a malfunctioning water pump, or your bad hip starts acting up, or you accidentally drop too much acid before getting in, and your float isn’t exactly ruined but it isn’t exactly peaceful either. On Being Water was a little like that.

So bravo to Neist for his ambitious production, his plucky determination, and his willingness to take a risk on his own show despite the setbacks. I can’t wait to see what crazy thing washes up out of his imagination next.

Matthew Neil Andrews is a composer, singer, percussionist, and editor of Subito at Portland State University, and serves on the board of Cascadia Composers. He and his music can be reached at monogeite.bandcamp.com.