Bridging town and gown through dance

There has often been a social and cultural distance between an institution of higher education and the city that surrounds it. This detachment between town and gown dates back to the European Middle Ages when academic and non-academic worlds often eyed each other with some sense of conflict and mutual suspicion.

Fortunately, there is far less distance these days as more academic centers and local communities find unique opportunities to become mutually engaged in social and economic projects, research, and artistic efforts. Interplay, a collaborative project of the University of Oregon School of Music and Dance Department and the Eugene Ballet Company, provides evidence of this in a March 8-10 production.

The idea behind Interplay, the way in which two or more things have an effect on each other, is to explore ways in which four choreographers from the university and three from the Eugene Ballet, along with dancers from both organizations, can become creatively engaged with one another and share the results with audiences in the intimate environment of the Soreng Theater at the Hult Center for the Performing Arts.

Interplay includes new works, some with original music, and the revival of other pieces that reflect the creative and expressive spirit of regional dancers, choreographers, and composers.

Steven J. Chatfield’s new piece “Bach to Bach” is the second in a series of experiments that he is doing that juxtaposes sound and movement to see how observer perceptions shift when subtle, and sometimes not so subtle, things change. “The first experiment was doing the same movement against several different soundtracks.” said UO Department of Dance Head Chair Chatfield. “Often times people were not even aware that a movement was being repeated because the soundtracks were so vastly different.”

One of those soundtracks was Bach’s Prelude from the Cello Suite Number 1 in G Major. “We enjoyed this piece so much that we decided to try a second experiment.” This experiment, which is the piece being prepared for Interplay, “will repeat Bach’s prelude three times and with it we will do slightly different movements. We will modify qualities and gestures seeking to see if the observer’s perception shifts along with the changing subtleties of movement even though the soundtrack is precisely the same.”

Associate Professor of Dance Walter Kennedy and UO Dance Department Music Director Christian Cherry have collaborated in the reconstruction of a piece first performed in 2011. Cherry chose the title Whorl after a plant leaf pattern where the leaves are arranged around a node on the stalk in a whorl. In this piece the dancers dance in a whorl of competitive spirit to a score of tablas played and sampled by Cherry, with electric guitar and synthesizer textures in different temporal spaces. “This sonic space is designed to envelop the dancers and to give them a range of time frames to dance in and against,” Cherry told ArtsWatch.

UO dance instructor Sarah Ebert is no stranger to Eugene Ballet having choreographed works for both its students and three Eugene Ballet performances including a collaboration with the Oregon Bach Festival. Of The Exchange, the piece she has choreographed for Interplay, she says, “I was particularly interested in working with a combination of dancers from both organizations, and while I usually like to title a dance when it’s closer to being finished, this idea suits the collaborative nature of the project. The six dancers in the work (three from EBC and three from UO, and a mixture of all ranks: faculty, student, principal, corps) complement one another beautifully, and equally engage in the athletic yet slinky movement that showcases form and sensation alike.”

The music for The Exchange is an original score, composed by Cherry, that creates “a vibrant, charged atmosphere that electrifies the ensemble of dancers.”  Ebert notes that Cherry’s music “definitely informs the movement, as I am typically driven by music when making a dance. I am responding to the electronic impulses in the score that spark new ways for the dancers to meet one another, and am particularly inspired by the deep dips in the bass line and the dancers’ gutsy play with gravity.”  Cherry adds that the dancing ensemble is strong and the work is vibrant and a little raw in that he has made “a hard edged dubstep-inspired rhythmic backbone” for the music and has “added textures to shape the experience for the dancer and listener, alike.” The rhythm is the melody and it was made to push the dancers with energy. “It has multiple feels throughout: after an introduction to timbral players, layered polyrhythms take over. Stark contrast is prevalent in making sectional variation.”

Eugene Ballet resident choreographer Suzanne Haag has reprised her ballet The Surrounding Third, which successfully premiered with the company in 2017. The work, Haag told ArtsWatch at the time, is not a narrative piece, though the female dancer, wearing a long blue dress that mimics ocean waves, interacts with three male dancers, each of whom each represent a different emotion; sorrow, hope, and power. Set to the music of Samuel Barber’s Adagio for Strings, the ballet shows, Haag suggests, “that though we can chose to approach life in different ways, much of our lives and relationships are products of circumstance or external forces. We are just being tossed around in the sea of life.”  This year’s production features Eugene Ballet’s Sara Stockwell with Mark Tucker, Reed Souther, and Hirofume Kitazume. 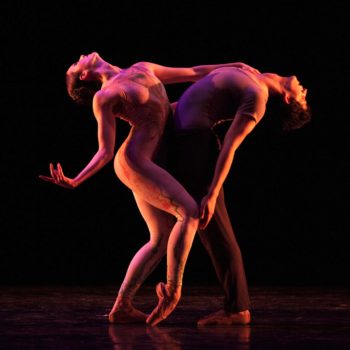 When, in 1991, the original choreographer for a newly planned Atlanta Ballet piece fell ill,  Eugene Ballet Artistic Director Toni Pimble was approached to undertake the project for which an Atlanta composer, James Oliverio, was composing a four movement score. “James wanted the work to be about the two sides of human nature; the aggressive [and] competitive and the gentle, quieter side and the hope that these two natures might one day find common ground in their coexistence.” Pimble recalls. The ballet premiered in 1992  with Atlanta Ballet dancers Cubie Burke and Deidre Carberry dancing the sensual pas de deux where the two sides of human nature come together. This pas de deux Common Ground will be performed on the Interplay program.

“This signature pas de deux from Act 3 of Don Quixote is danced predominantly for ballet competitions and gala performances when not kept within the context of the full- length ballet.” Martin observes. “This is due in part to the difficult nature of the choreography.” Similarly to the Black Swan pas de deux in the classic Swan Lake, this pas de deux, “contains technical elements that challenge the dancers, showcase their skill level, and leave observers sitting on the edge of their seats.”  What makes this work a favorite for both dancers and viewers is the focus on competitive elements between male and female dancer: tricky balances, multiple turns, large jumps, and exciting lifts combined with the flirty Spanish themes of the ballet and the musical score composed by Ludwig Minkus. The ballet was originally choreographed by Marius Petipa for the Imperial Bolshoi Theatre, Moscow in 1869.

Interplay concludes with Between Your Eyes and You, a collaborative effort between Haag and UO Associate Professor of Dance Shannon Mockli that brings together dancers from both organizations in an original 25-minute ensemble piece with music from Maurice Ravel’s Miroirs (Mirrors) and spoken word inspired by the poetry of Elizabeth Bishop, Sylvia Plath, and Sholeh Wolpé, along with Hagg’s and Mockli’s thoughts about their perceptions of dance, read by actors Craig Phillips and Milagro Vargas.

The work metaphorically explores the use of rolling mirrors to see from multiple perspectives how the perception of self is developed over time. “For Suzanne and I, this exploration also became about our identities as dancers, then choreographers.” Mockli told ArtsWatch. They first met in the studio to exchange movement phrases and gestural ideas, as well as to witness each other improvise. In the process, the two came to know each other as they probed questions about how their perceptions of self have been shaped through culture and dance training. “How our own experience of looking in the mirror is not an objective one, but one impacted by our developed narratives.” Mockli observes.  Though she’s not sure what visual impact their studio process might have on the audience experience, she hopes that it has set a tone for creating a more meaningful, relevant work that can resonate on a more universal level.

Interplay represents a growing collaborative relationship between the University of Oregon Dance Department and the Eugene Ballet, which is proving to be a productive relationship for both, Chatfield told ArtsWatch. “Eugene Ballet has been incredibly gracious about sharing and collaborating.” He adds,  “A new Community Partnership Program allows us to entertain their workshops in our spaces and we welcome the EBC working with our students during their open rehearsals.” Likewise the Dance Department has students and instructors who collaborate with the Eugene Ballet. “This is to the benefit of the program at the danced department as well as to the benefit of Eugene Ballet.

Toni Pimble agrees, adding that the Eugene Ballet has collaborated with most of Eugene’s performing arts groups at some time over its 40-year history. She says she considers this first collaborative performance with the UO Dance Department in the Soreng Theater: interaction is “always valuable for the growth of our dancers as they are challenged with new movement and ideas,” she says.