From the father of modern Ukraine literature to the missing statues in Portland's Park Blocks, a battle brews over history and the stories we tell.

Scrolling through my Facebook feed this morning I ran across this photo and brief item that I had posted eight years ago, on July 18, 2014:

It was so peaceful, so serene;

We but began to break the chains

That bind our folk in slavery …

When halt! … Again the people’s blood

About a bone, the royal thugs

Are at each other’s throat again.

The poet and painter Shevchenko was the father of modern Ukrainian literature, and a Ukrainian nationalist who was imprisoned on orders of the czar. The drawing is his self-portrait as a soldier, 1847.

The roots of the current atrocity in Ukraine run deep, and yet again, the people’s blood is streaming. Cities and towns are in rubble, the rockets scream, the death toll mounts, and the royal thug — the man who would be czar — digs in. Amid it all the poets and artists, as well as the journalists, tell the tale.

Turning from my computer screen I picked up my morning New York Times and discovered this story, Culture War, With Bombs and Missiles, on the front page. It’s by The Times’s critic-at-large Jason Farago, who is in Kyiv. The subhead on the online version puts it succinctly: “With Russia trying to erase Ukraine’s national identity, the fight to preserve, and build upon, Ukraine’s artistic heritage has taken on new urgency.”

“‘Why would a critic go into a war zone?'” Farago asks. “Why should anyone care about a painting when cruise missiles are overhead? Because ‘this is a war about cultural identity,’ said the curator Leonid Maruschak — one of so many writers, musicians and scholars I’ve met here who make no distinction between the survival of Ukraine’s people and land and the survival of its history and ideas. With Russia actively trying to erase Ukraine’s national identity, this country’s music, literature, movies and monuments are not recreations. They are battlefields. The true culture war of our age is the war for democracy, and Ukrainian culture, past and present, has become a vital line of defense for the whole liberal order.”

Farago’s report follows another front page Times story, from Sunday: Putin’s Mission To Indoctrinate Schoolchildren, by Anton Troianovski. “Starting in first grade, students across Russia will soon sit through weekly classes featuring war movies and virtual tours through Crimea,” Troianovski writes. “They will be given a steady dose of lectures on topics like ‘the geopolitical situation’ and ‘traditional values.’ In addition to a regular flag-raising ceremony, they will be introduced to lessons celebrating Russia’s ‘rebirth’ under President Vladimir V. Putin.

“And, according to legislation signed into law by Mr. Putin on Thursday, all Russian children will be encouraged to join a new patriotic youth movement in the likeness of the Soviet Union’s red-cravatted ‘Pioneers’ — presided over by the president himself.” Troianovski continues, quoting the senior Kremlin bureaucrat Sergei Novikov speaking to thousands of Russian schoolteachers in an online workshop: “We need to know how to infect them with our ideology. Our ideological work is aimed at changing consciousness.”

“Infecting them with our ideology” is, of course, an old trick, one for which Putin has many models. And artists sometimes have been willing collaborators in the deception: Leni Riefenstahl’s glossy 1935 Nazi propaganda film Triumph of the Will, for instance, and D.W. Griffith’s 1915 silent-movie extravaganza The Birth of a Nation, which glorified the Ku Klux Klan and led to a resurgence in Klan membership and activity.

In the United States, the move to infect with ideology is readily seen in the right-wing campaign to compel what schoolchildren can see or hear, and to reinvent the story of history or quash any efforts to correct the historical record. Book-banning in the schools (including several districts in Oregon) is unceasing, with ideologically driven adults requiring that schoolrooms and libraries root out anything that smacks of retelling, for instance, the history of race in America, or that tells any sort of alternative personal story.

While the right holds fiercely to the steering wheel of re-education, the left takes its spin on the ideological racetrack, too. Consider the tearing-down and partial destruction of statues of Abraham Lincoln and Theodore Roosevelt in Portland’s South Park Blocks — monuments that the city still has not put back in their places.

Both presidents, of course, had their blind spots and made harmful decisions. Lincoln had a contentious record on Indigenous policies. Roosevelt had an imperialist streak a mile wide. But Roosevelt was also a champion of the environment, greatly expanding the National Parks system (including establishing Oregon’s Crater Lake National Park) and advocating stewardship of the land. And Lincoln, while holding the nation together during the Civil War, essentially reinvented the idea of the republic by taking the Founding Fathers at their words rather than their deeds.

The idea of monumentalizing historical “heroes” isn’t without controversy. Much of the world rejoiced, after the collapse of the Soviet Union, when citizens in Eastern Europe tore down statues of Stalin and Lenin. And the drive in the United States to take down public monuments to leaders of the Confederacy (and, ideally, re-place them in museum settings, where they can be put into historical and cultural context) has large public approval: People have begun to understand that the movement to put up the statues in the first place was part of a reactionary, decades-after-the-fact campaign to recast the leaders of the rebellion as saints of a Noble Lost Cause – a mythologizing of white supremacy.

The tearing-down of the Lincoln and Roosevelt statues is in a different category, and one in which the public was given no opportunity to cast even a non-binding vote. They were provocations by a small group of people willing to force their own ideology on the public at large. The discussion of who should be monumentalized, or even whether any individuals should be put on public pedestals, is worth having. The erasure of what exists, with no public discussion of the matter, is as anti-democratic as the right wing’s book-banning: Pot, meet kettle. And it suggests a contempt for the public — a belief that people can’t handle any sort of complexity of thought. One can’t look at a statue of Lincoln, it implies, and understand that he was a complex figure, with flaws, but also with great strengths. We must, as the Kremlin bureaucrat put it, infect the people with our ideology and change their consciousness.

Is it the end of the world if the Lincoln and Roosevelt statues never return to the park? No. But it’s a chipping-away at what Farago calls the “liberal order” of openness and freedom of thought — ideas that are central to the artistic and cultural impulse. Another headline on the front page of this morning’s Times reads, Climate Crisis Fades as Worry for U.S. Voters: Inflation and Pandemic Sap Energy to Fight. (The headline on the story’s online version is more stark: As the Planet Cooks, Climate Stalls as a Political Issue.)

The story made me think of the many artists, especially in the Pacific Northwest, for whom environmental issues are at the core of their work. Last week I wrote about one of them, the painter Matthew Dennison, and the wildlife portraits in his exhibit Sovereignty of the Ancients at the Imogen Gallery in Astoria. “The balance we need to obtain with the natural world is critical,” Dennison told me. “I am optimistic, but very worried.”

Reading the Times story, and thinking about Dennison’s artwork, I remembered the many times I walked past Abe and Teddy in the park blocks — and the many times, looking at Teddy, that I was prompted to think about the natural world and the National Parks. Apparently I haven’t been sufficiently infected with the proper ideology. Apparently the people of Kyiv are resisting the infection, too. 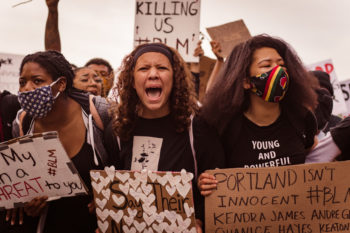