Chamber Music Northwest celebrated Bastille Day 2018 with music by two of France’s greatest composers and two of the myriad composers they inspired. The first program featured mostly music by Stravinsky, who spent many of his most creative years in Paris, with a bit of Debussy, Jean Cartan, and Jacques Ibert. The second included more Debussy alongside quartets by New York composer Andy Akiho and Olivier Messiaen. Together, these concerts told a story of faith in defiance of war, hope in defiance of death, love in defiance of fear.

The first concert opened with a clarinet solo, Stravinsky’s Three Pieces for Solo Clarinet, performed not by CMNW Artistic Director and clarinetist extraordinaire David Shifrin but instead by one of his students. Seattle Symphony principal Benjamin Lulich’s placid and friendly performance of Stravinsky’s “written-out portraits of improvisation” offered highly detailed melodic contouring and an especially impressive a niente. A small start, but a good one.

Another solo followed, and our tale of devils and soldiers commenced. Debussy’s famous ode to Pan—1913’s Syrinx—is standard flute repertoire, so it’s not really surprising that Ransom Wilson performed it from memory, but playing off book gave Wilson the chance to stalk the stage and work the crowd with his suggestive J. Peterman eyebrows, invoking the seductively devilish Pan with every cocky gesture.

The rest of the first half was a true snoozer. Lulich and Wilson gave a cute reading of Jean Cartan’s charming and inconsequential Sonatine for Flute and Clarinet, by a composer who didn’t get to develop properly before succumbing to Keats Disease. The much-loved Ibert has no such excuses, and at least one audient snored through his Suite from Le jardinier de Samos. The ensemble played well, especially trumpeter Mikio Sasaki and cellist Mihai Marica, but it was difficult not to pity virtuoso percussionist Ian Rosenbaum, standing around waiting for his chance to play the tambourine.

None of that mattered, though, because this concert was really about The Soldier’s Tale. In lieu of the often unwelcome narrator, bassoonist Julie Feves stood up before the performance and proceeded to tell the whole damn “Faustian tale of a poor guy who falls in with the The Devil,” moral and all, adding “What folk tale would be a folk tale without a moral?” (Someone in the audience muttered, “spoiler alert.”) But Feves, now in her 45th season with CMNW, was funny and engaging, a terrific storyteller.

The true star was violinist Jennifer Frautschi, at the end of her ninth CMNW visit, which began with the tedious John Luther Adams’ ordeal and continued with two highly entertaining performances of Akiho’s Deciduous. Her take on Stravinsky’s street theater morality play revealed the work’s true nature: it is a violin concerto, driven not by virtuosic displays of technical skill but by the violinist’s narrative prowess and ability to portray multiple characters and sell the audience the story.

Frautschi (who recorded Stravinsky’s real Violin Concerto with Robert Craft) really got into it, playing both soldier and devil, by turns raw, naive, tricky, vibrant, despondent, wickedly victorious, all in service of Character and Story. In the Three Dances, her violin played the schmaltzy Lothario to perfection, surpassing Wilson’s leering Pan, as if Frautschi were truly a bedeviled soldier trying to seduce a princess in a castle.

The ensemble was great overall, especially the bold clarity of Feves’s bassoon and the sturdy, comical playing of trombonist Charles Reneau, who usually spends his time in the Oregon Symphony Orchestra brass section. Rosenbaum showed his sensitive side, alternately supporting and subordinating the group with the theatrical subtleties of his unique percussive voice, caressing that infamous closing solo with a patient, diabolical glee.

The story Frautschi and company told spoke of more than soldiers and devils, innocence and temptation, war and romance. This was also a tale of exiles crossing borders and longing for home, recalling Stravinsky’s last words: “How lovely. This belongs to me, it is my home.”

From Street Scene to Prison Camp

As a concert opener for the following night’s show at Kaul Auditorium,  Debussy’s Sonata for Violin and Piano (his last completed work) could have been a bit of a downer, if we hadn’t been preparing ourselves for musical apocalypse. The composer called it “an example of what is produced by a sick man in a time of war.” That makes a certain morbid sense: he’s dying, the whole world is dying, all is lost. It’s the ultimate memento mori. Yet the music has survived the flesh and lived on, and it came vividly to life in the hands of violinist Alexander Sitkovetsky and pianist Wu Qian, in their CMNW debuts. They performed with a dazzling vigor belying its composer’s moribund state, dreamlike and intoxicated like an evening at the cabaret with Erik Satie, animated bird calls and mysterious longing, heroic and noble and melancholy, vibrant but not overpowering, like a campfire on a cold night, exactly like a man facing down inevitable war and implacable death and deciding to send out a few last jolly rages against the dying of the light.

At a pre-concert talk, Shifrin immediately connected that evening’s program, featuring that Debussy sonata, Akiho’s Lost on Chiaroscuro Street and Messiaen’s Quartet for the End of Time, with the prior concert’s. He told the familiar story of Messiaen composing his Quartet in a German POW camp, where he premiered it with three other prisoners on what Shifrin called “barely functioning instruments.” He traced the connection to Akiho, noting Messiaen’s “almost obsessive care and attention to rhythm” and “incredible sense of color, something very much in common with our Mr. Akiho,” concluding, “Andy is now breaking barriers in the 21st century with rhythm and color.”

“The title comes from a story in my life,” Akiho told the audience before the performance. “In 2014-15 I lived in Rome. Some friends suggested I go to this church and check out some Caravaggios. That’s where a lot of the inspiration and initiative came from. I’m always walking at 3 a.m. in places I probably shouldn’t go.” 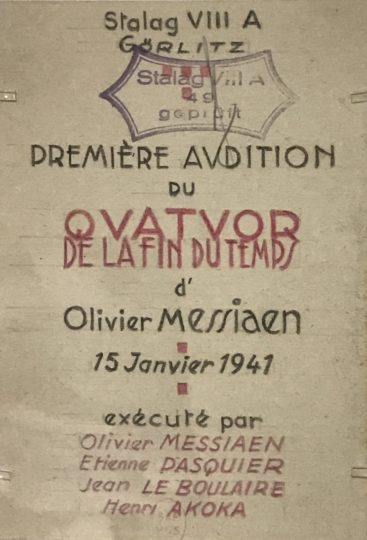 The influence of Messiaen’s quartet on Akiho’s is unmistakable, though the latter is hardly derivative. The first movement opens with a long slow build, quiet cello opening accompanied by low piano harmonics and stuttering, fading chords in the violin and clarinet. Akiho’s usual colorful crenellations and distinctive rhythmic harmony—complex polyrhythms against a straightforward beat—dominated the music, making it more textural and kinetic than melodic. The middle movement provided a solo for Shifrin, the gooey center, more Harrisonesque than Messiaenic. Sitkovetsky’s shivering violin and Marica’s bouncy, interrupting cello spooled out overlapping cycles of rotating ostinati, Qian’s piano punctuating a clear slow melody with tinkly scurries. The final movement’s sound world was somewhere adjacent to the integral serialism Messiaen helped create.

Before the concert started, Shifrin advised the audience about two corrections to the printed program. “The Quartet for the End of Time is a monumental work and is not 24 minutes—it’s closer to an hour.” It seems the end of time would come later than expected. “And the last movement,” subtitle he continued, “refers to the immortality of Jesus” — not, as the program had it, immorality, although it did remind us that when He got busted, it was primarily for hanging around with a sordid assortment of sinners, hookers, and tax collectors.

With that oh-so-familiar “Crystal Liturgy” riff, Shifrin immediately started kicking ass, his clarinet reverberant in Kaul’s sweet sonic space, the tempo a little quick. Later, in the solo movement “Abyss of Birds,” Shifrin simply never seemed to run out of breath, as always, as if he’s got a third lung somewhere, hidden in his brain perhaps, wrinkling his forehead. It’s amazing how expressive one well-played note can be. Marica took an appropriately theremin-like approach, his playing heraldic and melancholy on the “Vocalise” and overwhelmingly gorgeous on “Praise to the Eternity of Jesus,” that cryptic lullaby for the infant messiah.

The ensemble as a whole, in their rare movements together, played with affectionate attention to each other’s rhythmic subtleties, their “Intermezzo” playful and sardonic, a Gallic impression of Vienna; their “Dance of fury, for the Seven Trumpets” nice and crunchy but a little slow; their “Cluster of Rainbows, for the Angel who Announces the End of Time” all melty and cattywhompus.

Sitkovetsky finally got his moment in the spotlight on that immoral conclusion, his vibrato warmer than Marica’s theremincello, a warm full-blooded tone even in the highest register, his delicate portamento and varied vibrato sometimes subtle, sometimes right in your face, never over the top, a picture of subdued passion and yearning grace, a song of publicans and sinners, beggars and soldiers, all coming together at the Banquet of the Lamb beyond the end of time.

For all its birdsongs and intense dissonances, this is true church music, a morality play of longing, frustrated desire, Christ’s love for forbidden Mary (or even more forbidden John, depending on which heresy you prefer), a soldier’s desire for peace, a sinner’s desire for holiness, an exile’s longing for home. And thus Messiaen’s Quartet gave the whole two-night affair its meaning, its resonance, its spiritual apotheosis: faith in defiance of war, hope in defiance of death, love in defiance of fear.

Matthew Neil Andrews is a composer, singer, percussionist, and editor of Subito at Portland State University, and serves on the board of Cascadia Composers. He and his music can be reached at monogeite.bandcamp.com.