Chauncey Parsons, long dark cloak whipped behind him by the speed of his movement, makes an anguished, running entrance onto the Keller Auditorium stage, which is set as a medieval German graveyard, and flings the cloak aside as he kneels before Giselle’s grave.

That was in 2012, in Oregon Ballet Theatre’s incredibly elegant and expensive production of Giselle. A year later, as Florimund in Christopher Stowell’s staging of The Sleeping Beauty (which will be revived next season), Parsons made every entrance with the presence and panache of the great Russian dancers – but, as I wrote for The Oregonian, minus the bombast.

Last fall, Parsons—a fantasy cape hanging from his shoulders, back as straight as a coral spine—made his first entrance as Golfo, ruler of his undersea territory, in the second act of Oregon Ballet Theatre’s evening-length production of Bournonville’s Napoli, inhabiting the arrogant sea monster’s role with chilling authority.

And late one afternoon, about nine years ago, in well-worn practice clothes, with frequent dancing partner Yuka Iino (now retired, but she was his Aurora in The Sleeping Beauty) he came bounding through the door of OBT’s now-razed-to-the-ground main studio in Southeast Portland, to dance the Pas de Deux from Petipa’s Don Quixote, in honor of Jacqueline Schumacher, whose 90th birthday it was.

Wherever he’s dancing, from the ballet studio to the Newmark Theatre or the Keller, Parsons knows how—and how!—to make an entrance. Now he’s making his final exit from his dancing career, in Director’s Choice, OBT’s spring repertory show, which runs Friday through Sunday, April 11-14. Parsons will perform in two works by OBT resident choreographer Nicolo Fonte, Presto and Giants Before Us, and in an excerpt from Darrell Grand Moultrie’s Vital Sensations, titled “Love” – a “career-changing” solo, Parsons told me, made for him in 2005 when he was dancing with Colorado Ballet. Also on the program are Nacho Duato’s Jardi Tancat and Gioconda Barbuto’s BringingOutsideIn, each of which showcases the versatility of OBT’s dancers in different ways.

In his eleven years with OBT (Christopher Stowell hired him as a soloist in 2008 and promoted him to principal in 2009) Parsons has danced in many of Fonte’s ballets, including the evening-length Beautiful Decay; Never Stop Falling (in Love), and, most recently, Rhapsody in Blue. “[Chauncey] has a unique blend of classical (ballet) knowledge and depth with a contemporary ease of movement coupled with exceptional line,” Fonte said in an e-mail.

I couldn’t agree more. The language of classical technique, like any language—French, Chinese, Arabic—has many dialects, and because of his training and two decades of performing experience Parsons is fluent in many of them. The classical polyglot, who refers to steps as the “spelling and grammar” of ballet, whether narrative or plotless, traditional, neoclassical or contemporary, showed no signs in childhood of exceptional classic line, never mind the impeccable spinal placement on which that line is based. On the contrary, it was his bad posture, he told me, that caused the mother of this all-American, red-headed, blue-eyed California boy to threaten him with ballet classes if he didn’t learn to stand up straight.

He hated the idea, but when he was 12 and still wouldn’t straighten up, she made good on her threat and put him in classes at the Santa Barbara Ballet Center. There, Michelle Pearson and Denise Rinaldi—teachers of Cecchetti technique, considered by many to be the basis of English ballet style, and Parsons’ first ballet language—instilled in his elegantly proportioned and slight body the posture of an Albrecht, or Prince Siegfried, or Prince Florimund so well that three years later he was accepted into the Kirov Academy of Ballet, in Washington D.C., and learned, among many other things, his second ballet language. That was Agrippina Vaganova’s, which is rooted in Marius Petipa’s: Parsons delighted in telling me that his teacher there, Vladimir Djouloukhadze traced his own technique back to Nijinsky. Under his tutelage Parsons found his inner Russian, and something even more important—to dance whatever he dances with clarity and the thoughtful analysis that takes the artist, in Susan Sontag’s phrase, “beyond technique.”

As he told Gavin Larsen for a program tribute, it took him some time to understand exactly how to do that, and what that meant. It was in his Colorado Ballet years, under the direction of Martin Fredmann, where he got his first principal role in the Petipa repertory, Basilio in Don Quixote, that he began to come into his own as the versatile, collaborative artist he is today. And it was Moultrie, he says, who with Love—the solo he made as much with Parsons as on him in 2005, and which we’ll see in these final performances—who validated his growth as an artist. “It was my first approach to a big idea in dance,” Parsons said of the Latin-jazz inspired work.

Parsons’ career has been spent dancing with small and mid-size, so-called regional companies (New Yorkese for anything west of the Hudson): Santa Barbara’s State Street Ballet; D.C.’s Washington Ballet; Colorado Ballet, and OBT. I asked him if he had wanted to dance with a major company. “Yes, I thought so at one time,” he replied. “But the best thing that ever happened to me is that I didn’t. I would have disappeared.”

Ballet can be cruel: Parsons is five foot nine and a quarter inches tall (“that quarter inch is important,” he said, laughing), not tall enough to partner today’s American Ballet Theatre or San Francisco Ballet ballerinas in the classical repertory, or Balanchine’s either. Yet disparity in height in no way lessened Parsons’ dancing of Don Jose (a role, like Albrecht, he seemed born to dance) with Alison Roper’s Carmen in Stowell’s eponymous ballet.

Before I asked Parsons the boilerplate question re favorite roles, I wanted to know his least favorite. Right off the bat, he said Prince Charming in every version of Cinderella he’s danced—Ben Stevenson’s for OBT; Septime Webre’s for Washington Ballet; Fredmann’s for Colorado Ballet. Favorites? I then asked, and apart from those already described, he mentioned the title role in Balanchine’s Apollo and the Sarabande and first pas de trois in Agon. As for roles he wishes he’d had a chance to perform, James in Bournonville’s La Sylphide, which he says is his favorite ballet, is at the top of this list.

Parsons is retiring at 37, in part because his body is increasingly subject to injury, but also because he wants to teach. That’s because he is passionate about preserving classical dance  in all its forms. And, no small thing, he is passionate about paying homage to his own teachers by teaching the next generations of dancers the many ballet dialects he’s learned, in the service of making the human connection, heart to heart, mind to mind, that he believes dancing is really about. At that, Parsons is a master. 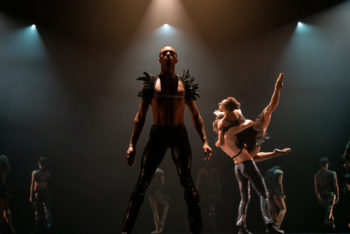