Checking the Percussive Pulse of Eugene

Story and photos by DANIEL HEILA

Percussion music and world music rose to prominence in America around the same time at the end of the last century. Recent concerts by the Eugene-based Beta Percussion International Institute (featured in this article by Gary Ferrington) and Sari Pandhawa Javanese gamelan proved the staying power of percussion’s cultural appeal—in both its contemporary and traditional forms—via performances by professional, amateur, and student musicians and a rarely seen multicultural theater art form. However, the concerts also contained troubling elements that threatened to weaken that appeal.

Since the early part of the twentieth century (starting with the works of such composers as John Cage and Edgard Varèse), percussion instruments have gradually escaped the confinement of accompaniment roles in Western art music. Yet prerecorded elements of the Beta Institute’s concerts seemed, at times, to force a self-conscious return to that role. And, as one of many hundreds of small community percussion ensembles throughout the country, Sari Pandhawa’s uninspired wayang kulit performance (shadow puppet theater) in downtown’s Kesey Square, was a warning of what can happen when such an organization loses its vitality.

The Rise of Percussion

Three concerts featured compositions by faculty members and prominent percussion performer/composers Michael Udow, Casey Cangelosi, Michael Burritt, and co-director Eriko Daimo, who performed solo, with each other, and with the students. Both faculty and students presented athletic, technically challenging works with aplomb. In several pieces (notably Casey Cangelosi’s performances of A Cool Gadget for Tambourine and Javier Alvarez’s Temazcal for maracas, Pius Cheung’s Nian 3, and student Jade Hail’s standout performance of Tchik by Nicolas Martynciow) the melding of technical gesture with idiomatic choreography created a dramatic unity. These musicians embody the music they make. However, the athleticism at times overshadowed the musicality, turning performances into mere feats of skill instead of artistic expressions—a fault of the composers more than the performers.

Many pieces featured prerecorded elements—economical packaging of non-percussion parts, tracks that sometimes dominated the listening experience, and tracks that doubled the percussion part or vice versa. However, they lacked electroacoustic elements that could both stand on their own yet in balance with the percussion, creating an enhanced whole.

I asked Cheung about this. He spoke about the thickening of sound that these doublings created, which often filled the space behind the performer. But this wasn’t always the case. In faculty member Casey Cangelosi’s performance of his composition A Cool Gadget for Tambourine, the doubling diluted several explosive slaps of the skinned tambourine that marked a turning point—it seemed redundant, a self-depreciation, as if the instrument couldn’t carry the drama alone.

In Michael Udow’s multimedia piece The Abyss of Time, the staging became an obstacle to a cohesive performance and to a rewarding listening experience. The stage was dominated by the large mallet instruments set up in an open chevron formation with a small projection screen at its terminus. The prerecorded instrumental parts carried more weight than the live percussion elements, creating an imbalance that distracted from the projected image. The result was a partially filled form that could have been reduced in scale and compacted in content to better support the imagery. The standard staging for wayang kulit shadow puppet theater of the Indonesian gamelan tradition (see later discussion), with the screen in front of the performers, could have saved the performance.

Standout performances from the six-hour student marathon concert that wrapped up the week included Justin Persichetti presenting his What is to Come for drum kit and looper, and Jade Hails delivering Nicolas Martynciow’s mercurial Tchik for solo snare drum. Persichetti’s clearly structured piece included effective transitions and an electroacoustic element that blended well with the quasiimprovised material. Hails performed with a graceful, corporeal severity that caused the technical demands of the piece to disappear behind gestural eloquence. Both performers delivered confident, percussion-centric music without the need for reinforcements, a good sign for the future of the Beta Percussion Institute.

Along with Western percussion music’s rise in popularity came a growing interest in traditional percussion music from around the world. Small ensembles sprang up in many cities across the country, often taught by masters of the traditions—African drumming and marimba, Japanese taiko, Brazilian samba percussion, and gamelan, the Indonesian metallophone orchestra of tuned metal bars struck with mallets. Since 1995, Eugene has been home to Gamelan Sari Pandhawa, a Javanese ensemble whose repertoire includes traditional gamelan music, arrangements of popular and classical pieces, and new music composed for the ensemble by music director and puppet master Qehn Jennings.

Sari Pandhawa also sometimes performs wayang kulit, a traditional shadow puppet theater of Indonesia performed behind a linen screen with stick-mounted leather puppets, lit from behind by a coconut oil lamp or electric light source. The theater’s repertoire runs the gamut from ritualistic and ceremonial to a kind of Southeast Asian commedia dell’arte, comic and irreverent. Music director Qehn has studied the art form with Indonesian puppet master Ki Widiyanto. It is very rare to see wayang kulit outside of Southeast Asia and Eugene is very lucky to have the ensemble in residence. Sari Pandhawa performed a free concert titled Quest: a multimedia wayang kulit in downtown Eugene’s Kesey Square on August 30.

The linen screen was set up toward the center of the square and partially hid the small ensemble. Puppet master Qehn animated the puppets from in between. However, the square’s bright LED security lights beamed brightly down upon the affair, overpowering the theater’s light source, causing double and triple overlapping silhouettes of the puppets — an effect alternately distracting and pleasing. A positioning deeper toward the back corner of the square would have avoided this issue.

Abstract video imagery by digital video artist Terry Holloway was mixed live and projected to enhance the puppetry. These projections provided faint texture to the background of the linen stage—amounting to a series of innocuous animated gobos (stenciled templates used in theater lighting). One could imagine similar work produced using a smart phone and simple, readily internet-available video editing software. However, Holloway’s creative processes are fairly complex. Take a look.

Unfortunately, the competing ambient light degraded the projections, except once when pallidity of the video imagery gave way to an arresting, ephemeral moment: a stick-like mesh provided a palpable environment in which the shadowy figures played, as if seen through thick branches. It was a glimpse of Holloway’s potential, and of the depth a well-executed moving-image element could have brought to the performance. 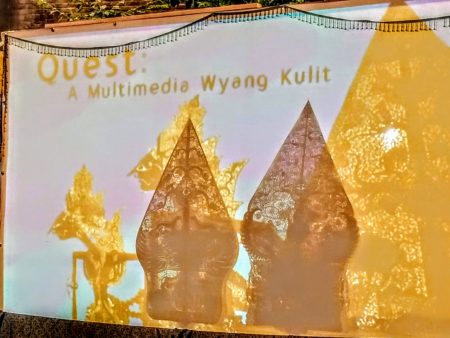 The Javanese tradition, which uses padded mallets to strike the bronze keys, is a relatively subdued version of Indonesian gamelan compared to the Balinese styles more familiar in America. Although environmental aspects of a performance space can challenge such a gentle sound—wind, heat/cold, ambient lighting and sound—Sari Pandhawa seemed to take this characteristic to an extreme, producing an anemic sound that lacked vitality. Often, the ambience of the downtown intersection and the simian antics of Eugene’s resident mendicants threatened to overwhelm the music. In Java, outdoor gamelan performances often happen in a pendopo, a pillared pavilion common that could keep the sound focused.

Qehn manipulated the puppets, sans narration, in what may have been traditional movements or perhaps antics of his own devising. There was no way for audience members new to the tradition to know for sure, since no explanations of or introductions to the performance were provided. That the audience was witnessing a quest was only evident in that one shadowy character appeared in several scenes (separated by delightful singing by Qehn—a highlight that could have been enhanced with translation) where he (she?) climbed things, fought with an ugly puppet and a dragon, and won the affection of another spectral puppet at the end.

At the close, Qehn invited the audience to purchase a CD of the ensemble’s music over to the side of the stage, but offered no illumination of the performance. A handful of folks, obviously longtime admirers, gathered backstage and chatted familiarly with the performers while potential future supporters of the ensemble moved on. 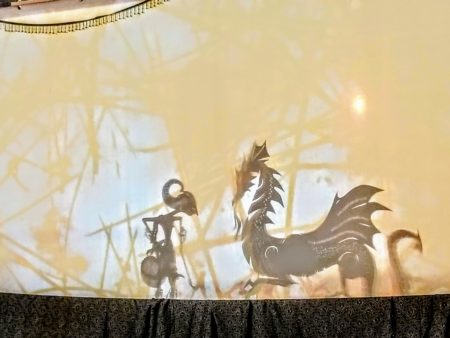 I have seen Sari Pandhawa in several performances over the years, all of better quality. Lacking was any attempt to educate the audience about the art form or to promote multiculturalism beyond setting up camp and playing the gig. Despite the ensemble’s mission statement, there was no preconcert talk, information table, or program note.

Some of the problems with this show could be attributed to the particular setting, which is as important in percussion music and theater as in any other performance. But there might be more to it. Unlike the new Beta Percussion International Institute, which will be regularly refreshed with new faculty and new generations of students, long-time creative organizations (especially nonprofits) often suffer from lagging internal interest and vigor. A proven solution is to inject new energy via mission realignment and to bring in fresh blood via new board members and, in the case of performing ensembles, new performers. Perhaps it is time for Sari Pandhawa to consider such things.

The continuum of creativity continues: Fear No Music’s “Legacies”