Coast calendar: Playing for good causes, and just for fun

It's fundraising season at the beach, with performances ranging from fingerstyle guitar to sea shanties.

This seems to be the season for music and fundraising, with a variety of performances scheduled up and down the Coast.

On the north end, Cannon Beach, Manzanita, and Nehalem will be the hot spots beginning Thursday and continuing through Oct. 13, as the communities kick off the first Fire Mountain Music festival. Named for Neahkahnie Mountain, the festival features numerous performances and workshops at multiple venues in each of the three towns.

A collaboration between nonprofits Cannon Beach Arts Association and Fly Me to the Moon, the festival begins Oct. 3 with performances in Cannon Beach, then continues Oct. 9-13 with events in Manzanita and Nehalem.

Tickets range from $10 for some performances to $90 for a concert package. Proceeds from the festival support the arts association’s arts education program, which includes Oregon Art Day in Clatsop County and summer art camp.

FARTHER SOUTH ON THE CENTRAL COAST, the Siletz Bay Music Festival is hosting Trick AND Treat at the Lincoln City home of Rudy and Marilyn Salci at 7 p.m. Oct. 26. Ken Peplowski and his “band of ghouls” — including Clairdee, Gary Hobbs, Tom Wakeling, and Randy Porter — will be the featured guests at “Rudy’s Spooky Piano Bar.”  The event is a fundraiser for the festival; tickets are $75 and include drinks and desserts.

IN NEWPORT, the Shifty Sailors are back in town Oct. 11 for a benefit performance at the Pacific Maritime Heritage Center.

Formed in 1993, the group of 20 men hails from Whidbey Island. They have been featured singers at festivals, events, and seaport celebrations on both coasts of the United States, Hawaii, and Europe and have recorded five CDs.

According to the heritage center website: “While they sing a few traditional sea shanties, their performances celebrate almost anything dealing with the sea. This includes lighthouses, shipwrecks, fishing, military, whales, folk songs, and even a few drinking songs! Accompanied by group leader Vern Olsen’s ‘squeeze-box’ and guitars, the Shifties have a style all their own.”

Proceeds from the concert will benefit ongoing renovations at the center. Tickets are $15 (17 years old and younger are free) and can be obtained at the Heritage Center or online.

THOUGH NOT SPECIFICALLY BENEFITS, the music continues in Lincoln City and Newport in events that would scarcely be possible without public support.  At the Lincoln City Cultural Center, the Cascadia Chamber Opera performs Gilbert & Sullivan’s classic comic opera H.M.S. Pinafore. Described as “minimally staged but still just as silly and fun,” and “featuring some of the finest voices in Oregon,” the opera promises to take Lincoln City on a “voyage through love and misadventure. You’ll fall for characters like Ralph Rackstraw, Dick Deadeye, Captain Corcoran and Little Buttercup, performed by seven principal singers along with a choir of 16.”

Tickets are $30 general, $28 for seniors, and $15 for youth ages 18 and under. Members of the cultural center get a discount.

The theater company advises, “Forget what you think you know about these characters – especially with regard to role size and importance – because this is unlike any Alice you’ve ever seen.” Roles range from Alice and the Queen of Hearts to the Dormouse and the Bandersnatch. Many major roles require strong vocal skill, but there are also roles that require no singing or dancing – as well as roles that require only those skills.

ALSO IN NEWPORT, A NUMBER OF NONMUSICAL EVENTS are happening at the Visual Arts Center – three of them opening Friday with public receptions and artist talks.

In the Runyan Gallery, the Sandra Roumagoux: Retrospective opens Oct. 4 with a talk by Roumagoux at 5:45 p.m. The exhibition, Roumagoux’s first retrospective, will include the artist’s oil paintings from the past 40-plus years, as well as collage, drawings, lithography, and mixed-media works.

Roumagoux was born in Yakima in 1940 and raised on a farm near Camp Adair in the Willamette Valley. She earned her BA and MFA from the University of Arkansas-Fayetteville, then returned to Newport in 1985. Besides being one of the area’s most recognized painters, Roumagoux served three terms as Newport’s mayor, ending last December.

“I’ve been called political, but I don’t know how to separate politics from art,” Roumagoux writes in her artist’s statement. “Both ask something of us, something that challenges us to a responsibility. Painter or politician, we come as candidates. We want our message to resonate with the body politic, with the voters. We make promises.”

The exhibition continues through Dec. 1.

In the center’s Coastal Oregon Visual Arts Showcase, the Oregon Coast Council for the Arts presents Moon Over Umpqua. The exhibit includes sterling silver, 14-karat gold fill, and metal clay jewelry by Kathy Moon of Reedsport. The COVAS Showcase rotates through Oregon’s seven coastal counties to highlight the work of midcareer coastal artists; Moon represents Douglas County. A First Friday public reception will be from 5 to 7 p.m. with the artist talking about her work at 6:45 p.m.

The Creative Life Expressions exhibit opens at 5 p.m. in the Upstairs Gallery with artists discussing their work at 6:30 p.m.  The exhibition will include works by members of the Coastal Arts Guild. 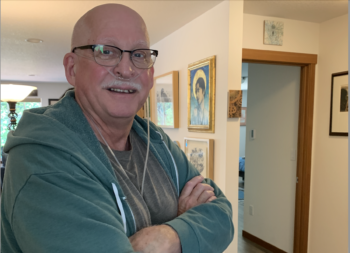