Commentary: Democracy and the arts

Let’s say someone said, “Tell me, Mr Bones, what should happen next, now that Oregon College of Art and Craft has decided to close the college and sell the campus?”

I’d probably sputter, make a few false starts, and then I’d say something like this:

“But Mr. Bones, what are the chances of all that happening?”

“So what WILL happen?”

I don’t know for sure, but it looks like all elbows and bulldozers to me.

The financial situation OCAC faces seems dire enough that a reasonable person could reasonably agree with the decision to close its degree-granting programs. The only reason I use “seems” is that I still haven’t seen the data on the current financial year, and I don’t know how much money is left in the college’s endowment.

The struggles at OCAC, after all, are consistent with both traditional art colleges and small liberal arts colleges across the country. The middle classes that used them to educate their kids have declined. Those who remain are so fearful about the future that they want a clear, immediate return—in the form of a job—for their investment at the same time that those costs have gotten higher, a double whammy.

But we mostly know this, right? Marylhurst University has closed, and we’ve read stories about financial stresses at Linfield College and Willamette University, among others. So, when news broke last fall that OCAC was trying to merge with Pacific Northwest College of Art and Portland State University, the writing was on the wall. Just looking at art colleges during the past few years, we’ve seen the disappearance via merger of the the Corcoran College of Art + Design, The Art Institute of Boston, The School of the Museum of Fine Arts in Boston, and the New Hampshire Institute of Art, and the closure announcement of the Memphis College of Art.

According to OCAC, the college has fewer than 140 students now in its degree program, and after graduation in May, 80 returning students (assuming no attrition) would have remained, plus a new class of entering students. And it’s unlikely recruitment for new students has been going very well, given the circumstances. The college offers single classes and summer workshops to adults and kids, too, but with steady deficits causing a depletion in the college’s small endowment (colleges often use their endowments to offset tuition costs for students), I understand the OCAC decision to close.

So why do I still feel…discontent?

Last Thursday, February 7, I met with representatives of the Oregon College of Art and Craft, led by interim president Jiseon Lee Isbara and board member Jeanine Jablonski. I had been hoping to speak with someone from OCAC during the fall as the merger talks with Northwest College of Art sparked and faded, and then in January as their discussion with Portland State University followed a similar pattern. But they had preferred not to discuss either their financial situation or the way they were thinking about it with ArtsWatch—or any other news outlet.

That Thursday, though, the course they’d chosen was pretty clear, even before the meeting started. The small number of OCAC people around were silent, eyes down, as they cleared the little conference room in the college’s admin building. I waited on a low-slung, well-made chair, made by an OCAC student I was told, while they prepared for the meeting. This felt like a funeral, not an announcement of new initiatives.

Isbara delivered the news and subsequently I reported it: OCAC was closing its degree programs at the end of this term, concluding with its May 19 graduation ceremony; the board was “actively considering” the fate of the college’s non-degree programs for both adults and kids. Ominously, the college had already secured the services of a commercial real estate agent, so the sale of the eight-acre campus on Southwest Barnes Road was a serious possibility, in case I was looking for a glimmer of hope in the future of the non-degree programs the board was “actively considering.”

In the room, emotions were close to the surface—sadness and the determination to move forward. The first sentence of the press release they handed me was indicative:

“We regret to announce that after several years of exploration, evaluation, and deliberation, the Oregon College of Art and Craft Board of Trustees approved a resolution to terminate all degree programs at the end of this academic term.”

“Several years” indicates the amount of pain involved, and using the verb “terminate” puts an end to that pain. There was no going back on this decision, made by a very small sliver of the OCAC community: When I was informed, I was told that faculty, students, alums and other supporters didn’t know what was going on yet.

I see that as a problem.

When a decision is made to close an historically important Portland institution, shouldn’t it be determined by the widest possible group of stakeholders? Shouldn’t their deliberations be public, and shouldn’t they consider ideas and offers of support from the community at large?

As much sympathy as I feel for the people in that OCAC conference room—and it is considerable, because I’ve worked for struggling organizations myself and reported on many, many others—I don’t believe tightly held decision-making is right. Clean and maybe effective in the short term, but I far prefer the messier processes of a more democratic process. Maybe you land in the same place, with the same decision, but at least everyone has had a say and a better understanding of the situation. And just maybe a solution, a new determination, a source of money you never considered pops up.

Back in 2009, after the Great Recession landed especially hard on the arts community here, raising the possibility that even what we call Major Institutions might fail, I wrote several columns for The Oregonian about the troubles they were having. In them, I developed a few thoughts about what it means for an arts group to be democratic.

Here’s a quick list of the democratic elements I was thinking about. From the outset, I’ll say that by democratic I didn’t mean that I expected arts groups to vote on everything—or even anything. I talked about it in terms of the nature of the relationships groups had with their stakeholders or members—staff, board, donors, volunteers, regular subscribers. I defined a democratic organization as one that:

1. grants its members an equal voice
2. involves them in ongoing discussions about the mission and future of the organization
3. allows them to be equally well-informed on the current situation of the organization
4. actively seeks their ideas for solutions to problems
5. responds supportively to their initiatives and ideas
6. depends on them for a range of activities usually closely held by staff members

I continued: “My criticism of arts organizations is that many aren’t very democratic. Some of the community members (those that give the most money, for example) are more equal than others. The organizations often are very hierarchical and very centralized. They manage information and hold it closely. I have seen artistic directors who are treated like royal personages, and board members treated like empress dowagers. I have seen a lot of people who’ve turned away [from supporting an arts group] because it doesn’t listen to them, doesn’t include them, doesn’t make them feel as though they are part of the club.”

And I concluded: “The arts are a public trust, not a private reserve. It’s up to us to make sure they can continue, and it’s up to them to connect to us in the most profound ways they can. Democracy just happens to be the best method to ensure that kind of deep connection.”

This line of argument landed with a thud back in 2009. Democracy is always a radical move, after all, and we have so few examples of democracy in action in our daily lives (either inside or outside of arts groups) to model new organizational structures on. Arts groups view their audiences as customers, not as partners or “members,” because that’s the way it works in the rest of society. (Their donors are especially important customers.)

Nonetheless, I still believe that if there had been a solution to the problems of the college, the community as a whole had a better chance of locating it than just the board or staff. And if a transformation of the college into something else more viable was possible, that community would have advanced it and supported it.

Let’s not mince words here: Closing the college and selling off the campus is the worst possible outcome for just about everybody. It ends a craft community and keeps anyone else from ever joining it. Sometimes, your community isn’t large or committed enough to go on, and then, yes, that’s the end of things. But asking your community to help you figure it all out should be the prior step. 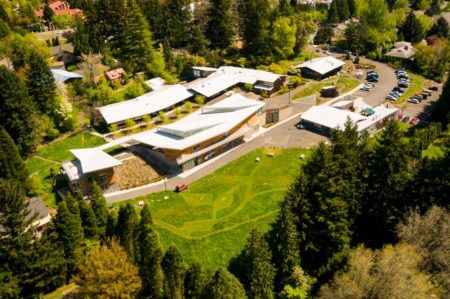 Closing OCAC buries a history that goes back to 1907, when Julia Hoffman helped start it and soon became the face of the school—and the Arts and Crafts movement in Portland. Walk through any of Portland’s inner eastside neighborhoods: Those bungalows, cottages, Queen Annes and four-squares prized so highly now came out of that movement, inspired by Hoffman. The number of artists who taught or learned their craft at what became OCAC is enormous. Even larger, the number of students who felt clay or fiber beneath their fingers for the first time—with the intention of making something wonderful…or at least passable.

After the death of the Museum of Contemporary Craft in 2016, OCAC became the last of the historic craft institutions standing in the city. Its disappearance won’t mean the disappearance of craft in Portland. Far from it. Portland is maker sort of city. There are alternatives to OCAC, places where you can learn to throw a pot or carve a wood blank. We have craft guilds and galleries devoted to craft work, especially craft art. We have craft collectives and craft hobbyists. It’s just hard now to see how and where they might convene to share and enjoy and forge a future in a place of their own that might connect them with the long past of craft work in this place, where the Willamette meets the Columbia.

For me, nostalgia factors in, for better or worse. After I left that meeting a week ago, I walked around the campus, took in the view to the southwest, overheard a few students talking outside the ceramic studio, saw an instructor arriving early before class to make sure everything was ready. It wasn’t busy; it was peaceful. And yeah, I thought of a different future for the place, maybe because it WAS so peaceful. Maybe because I was in a place that was about making things, as well and as beautifully as possible, making them by hand. And no, I didn’t want to see that end.