My introduction to the multimedia maestro Leanne Grabel comes by way of her small pup, Bailey, who sleeps nestled in her bed on the front porch of a turn-of-the-century house in a close-in Northeast Portland neighborhood. After figuring my way through the black wrought iron fence, I see Bailey and realize a moment too late that she’s been startled. Contrary to what I expect, she just looks at me wisely, assesses the threat level (zero), spins in her bed a few times, and retires right back into whatever dream I interrupted. This bodes well, I think, for what is to come. Sure enough, a knock later the door opens and brings me level with the bright and shining face of Grabel, who cordially shuffles me in and introduces me to her husband, Steve Sander, a well-met fellow going through some old books.

Meeting a literary figure can be a daunting affair, if only by the inherent lopsidedness of biographical knowledge, particularly if the writer’s work delves into the confessional. The experience can be downright exhilarating or painfully awkward, depending on chemistry, basic human laws of attraction, and the fact that some literary figures probably prefer not to be met at all but are forced into the fray of readings and mingling if they hope to sell their books. (Grabel’s own new graphic book of poetry, Gold Shoes, will be released at the end of March.)

In this case, I’m relieved the moment I see Leanne’s eyes. My first thought: THIS is a woman with a smart face. It’s all there in an instant: a cautious but curious expression (knowing as you do from reading her work that she is taking in every stitch of your clothing from your head to your toes), a keen twinkle to the eye touched with a hint of mischief, and a circumspect warmth, two words that don’t necessarily make sense together but get at a quality in her that struck me most particularly. After a tour of the house, we tuck into the room upstairs where much of her magic happens. 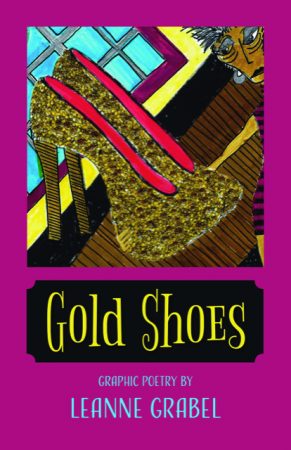 We spend our first meeting getting to know one another a little, shrinking the world between us to a manageable size by sorting through mutual acquaintances – a common phenomenon in a town like Portland, most especially if you are talking to a bona fide Portlander, and I suppose by that I mean anyone who has lived here for more than five years. Actually, I don’t know what constitutes a bona fide Portlander these days given the number of transplants who dominate the art scene, but I am pretty sure Leanne counts: She came here in the 1970s after falling in love with the open mic poetry scene, and has been instrumental in pushing the culture forward ever since.

She hails from Stockton, California, hit our rainy streets in ’75 with a boyfriend and a hankering, and has been making art—poetry, prose, spoken-word, all manner of performance, drawings, political trouble–if a bit anachronistically, ever since. In her words, she “is always in the wrong time,” meaning that her work never seems to catch the cultural wave that might translate into big money or a living based solely on her art work. What a lucky gift that has been for the rest of us in its own way. Instead, she has supported her art habit with a host of professional endeavors as varied as her artistic pursuits.

For years, she and her husband Steve owned the Southeast Hawthorne artist hot spot, Café Lena, until she got tired, as she puts it, “of the poets ordering me around.” Then she spent 12 years working for Portland Public Schools teaching and mentoring students who have endured unfathomable trauma, first at Rosemont Treatment Center and School and then at the Parry Center for Children. Her powerful book Badgirls, which features some of their stories, underwent a successful stage adaptation and also, she says, landed her in some inexplicable hot water with an Administrator-Who-Shall-Not-Be-Named for reasons that baffle and speak volumes not about Leanne’s book (which is gentle and generous in protecting the privacy of these students) but about the Administrator himself – in this case, Administrator with a capital A.

Throughout it all, Leanne maintains a disciplined writing and drawing/illustrating schedule and frequently collaborates with talented musicians to perform her poetry, a result of her finding traditional poetry readings generally boring. In fact, these days, she reports that she “is bored by words” altogether, which might explain her tendency to combine elements such as graphic art with flash memoir and poetry as well as poetry and sound. The instinct is a good one, and the result, alchemical–often creating a depth and dimension that doubles by the marriage.

Leanne’s illustrations are colorful, original, blunt, political, zany and even poignant when paired with text—the sort of drawings that most of us couldn’t make but which strike such a universal chord that we somehow feel we could. They will be on display in her current project, Gold Shoes, a graphic poetry book that reads as part love letter to her mother and part sharp-eyed commentary on the idiosyncrasies of family and the people we love: It’s set to be released March 30 by Finishing Line Press (pre-order here). Like much of her writing, Gold Shoes is sure to have a cumulative effect. The sentences are athletic and hilarious yet skinned, and the rhythm so staccato, so void of lyricism, that you don’t fully realize what a journey you’ve taken heart-wise (and humor-wise) until the very end.

The real gift of her work lies in the specificity of her descriptions and the particularity of her cadence. Her use of simile and metaphor rivals the best in the business (I’m talking Lorrie Moore good!). Consider this from The Day My Mother Died, published by the Opiate Magazine:

“My mother had an eye infection for months. (Should I be telling you this?) The rim of her left eye was swollen and crimson. Like a young mouth. But on an old eye it looked bloody awful.”

And this passage from her 2011 memoir, Brontosaurus: Memoir of a Sex Life, describing some professional women with whom she worked while employed by a magazine edited by tennis legend Billie Jean King:

Brontosaurus details a rape and abduction that happened while Leanne and two friends were on a road trip to Mexico as young students at Stanford University. 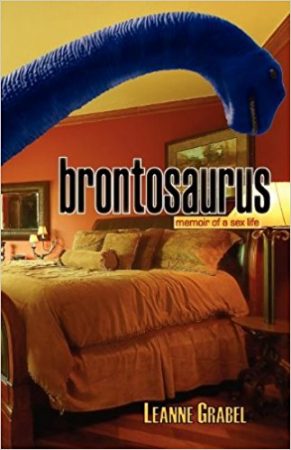 Apart from the brutality of the event and the visceral exactitude of the writing, the account gets at something profound that many memoirs of this sort do not—the fact that trauma does not follow a narrative arc, as much as we wish it could. There is an inciting incident, sure, but a true resolution is always out of reach, particularly when the other two victims will not acknowledge the act itself, and the idea of justice never seems to coalesce into an idea at all. Instead, the memoir reminds us that trauma remains as insidious as liquid itself, filling up spaces, leaking out and spilling over and ultimately influencing our choices, altering our very natures, whether we are aware of it or not.

In Leanne’s book, there is no trial, no long walk on a trail that brings forth epiphany on the other side—it is the opposite of a hero’s journey. If a good memoir is an account of what has happened to us and what we have had a hand in creating–all the truthful, messy ways we can implicate ourselves and others in the making of this chronology known as a life–Leanne’s book is at the top of its form. (She has also reimagined Brontosaurus as a graphic tale with her own illustrations. Renamed Tainted Illustrated, it’s been running in serial form in The Opiate, which is available at Powell’s.)

Leanne again hosts our final meeting, and it turns out Bailey Dog is sharing territory with a tiny and timid scruff-pup named Monkey. When I knock this time, barking ensues. Leanne ushers me in and lovingly picks up Monkey to cradle him. “We’re watching him for friends,” she tells me with a smile. She seems relaxed. She’s dressed in tights, and it’s hard not to notice both how fit she is and how comfortable she appears comforting this dog. I’m seeing a new dimension to her in this moment, and thinking how lucky her new granddaughter, Ophelia, will be to grow up with this woman in her life.

As to the fitness part, Leanne tells me she started exercising at the age of thirty as a way to stave of chronic low-level depression. “I did a piece about that!” she says. “I actually exercised on stage! I talk about how it is like waking up every morning with a heavy coat draped over your body and stones in your pocket.” She’s animated and lively now, the opposite of depressed, slipping easily into the character she created with a few, quick gestures.

Later, she plays some keyboard while reciting a poem. “I am going to do this for a performance in March,” she tells me. There’s a twinkle to her eye again. Even in this room, surrounded by her projects and family pictures, she is suddenly as commanding as if she were in a huge theater. I can picture an orchestra behind her, and I am reminded of something the late writer and National Book Award winner Denis Johnson said in an interview about the sources of his anxiety and how it all went away as soon as his fingers touched the keyboard. I wouldn’t call Leanne anxious, but there’s certainly a restlessness, a wanting to get at something deeper, something more. Luckily for her, the antidote can be found in more than just a keyboard. She has prowess over a mic, a piano, a pencil, a paintbrush, a well-curated social media page. She’s one of the rare and lucky among us whose skill level can keep up with her vast imagination. 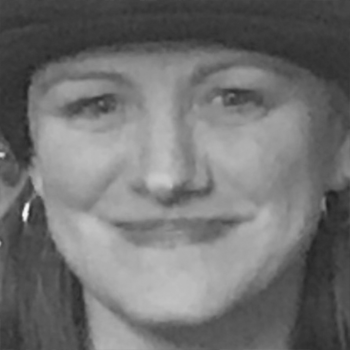