Cranberries and the art of thanks

Creating a bigger table for a more sustaining and convivial feast.

(Editor’s note: On this day of gathering, we dip into the ArtsWatch pantry for this story, which was first published on Thanksgiving Day 2018. From us to you, with thanks and gratitude.)

It’s Thanksgiving, and I hope, if you’re reading this, you’re giving yourself a little break in your day: waiting while the sweet potatoes are baking, maybe, or pausing before you pack hot dishes in the car and head out to break bread with friends. It’s a day for friendships and family and connections. And a day for rituals. We all have them.

One of mine is making the cranberry sauce, which I do two or three days in advance so the flavors meld and settle. My method is both improvisatory and familiar. Take a good-sized orange, peel it well and scrape off all the pith, dice the peel small and toss half or two-thirds of it in the pot. Cut the orange itself into slightly bigger chunks; add them and the juice. A generous dash of nutmeg, half a cinnamon stick, no more than half the amount of sugar that recipes generally call for: a satisfying sauce calls for a touch of sweet, but as with rhubarb, if you don’t like the tartness, why are you bothering? A little water or red wine to give the thing some liquid, stir and boil, add the fresh berries and cook ’em until they pop.

Well, that’s one way. That’s one tradition. And Thanksgiving’s very much about tradition.

Traditions, of course, cling to the past, but they can also shapeshift as the world spins forward. I remember first seeing, as an adult, Plymouth Rock, that magical storybook landmark of American childhoods, at least before this century, and discovering both how small the remaining rock is, weathered and winnowed and broken through the centuries, and how it’s fenced in for protection: an apt metaphor, or so it seemed, for the state of what the myth of it’s supposed to mean. I had long learned by then of the narrowness of the Pilgrims’ worldview, and the daunting future for the Wampanoag peoples who had met them and fed them and helped them through their first harsh winter, and of the continent-spanning truths of the matter in Edmund Wilson’s famously necessary Apologies to the Iroquois.

And yet, there was – is – thanks. And it is central, or so it seems, to what we loosely call the cultural life, which somehow involves seeking out both the good and the true, however good or bad a truth may be, and then finding the sweet spot in that often uneasy balance. Thankfulness is not so much about a day as it is about a way of living, a way of approaching life’s often harsh and thorny mysteries.

I’ve been reading The Zena Sutherland Lectures, 1983-1992, a collection of essays by prominent children’s authors including Maurice Sendak and Bridge to Terabithia‘s Katherine Paterson, and in it the fine writer Paula Fox observes that we “can turn to great poets, great writers, to help us speak of life, of its mysteries.”

Great musicians and dancers and painters and actors, of course, too. A little earlier in her essay Fox writes, speaking of some students she had had when she was a tutor at “an institution for neglected and dependent children,” most of whom had come from poverty and some of whom had experienced terrors: “What do pessimism or optimism have to do with Richard, who lived his childhood, day after day for six years, in a concentration camp? With Gloria, Danny, and Frank? With Peter? With these living presences, immanent with human soul?”

Sometimes giving, the sharing of a story, matters deeply. It is often through the sometimes difficult generosity of the cultural life, the willingness to confront and explore and understand such lives and circumstances, that we prompt action and move the world in ways large and sweeping or small and personal. And if we don’t, why are we bothering?

We make a great deal in the arts world of the distinction between professionals and amateurs, but it often seems to me that the truer and more important distinction lies in the degree to which artists, no matter their level of technical prowess, give freely to the world of what they have, and use that gift large or small to help pry open the mysteries and the adventures; to embrace a broadening concept of community as the world shrinks; to create a larger table for a more varied and sustaining and convivial feast.

It’s that spirit, in art and life, for which we give thanks. Thanksgiving is, I think, a humbleness in the face of the universe, and to that I’ll raise a toast. Happy Thanksgiving to you and yours. 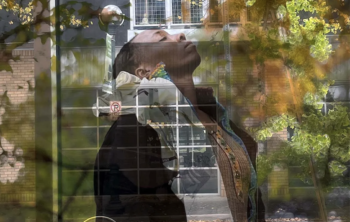 Reclaiming nature: Revelations at the Reser