If you think dance has left the building for the summer, you’re half right. While it’s not the mad crush of fall and spring, summer means festivals, which, in turn, means several artists packed into a single weekend. Summer also marks year-end recitals and the beginning of barefoot-in-the-park season, when we can all enjoy some fresh air with our art. (For every kid who fell hard for ballet after seeing The Nutcracker, there must be an equal number whose love of dance was inspired by the the dazzling swirl of Mexican folkloric dancers’ skirts viewed at close range.)

Where, besides in theaters, can you find June dance? In a winery, on a road trip, and even—we’re told—around a swamp in Forest Park. People of every age, shape, and skill level are making dance this month, in well-known styles and newly smashed-together genres. What’s your pleasure?

If you’ve never been to the Wilsonville Festival of Arts, what have you been waiting for? The event is celebrating its 20th anniversary this year with art you didn’t know you needed until you did, such as the mobile opera truck and the mask parade.

Organizers feel it’s important to warm up before a full day of art, and to that end, they’re kicking off Saturday with a Steal the Sun Tai Chi class and Sunday with a yoga class, both at 10 a.m. Saturday headliners Baile Folklorico Cosecha Mestiza demonstrate the finer points of Mexican folkloric dance, accompanied live by Son Huitzil; we’ll spend the rest of the weekend exploring the interactive Braille exhibit by Scott Wayne Indiana and Ben Stagl, the musical installation by deaf musician Myles de Bastion, and the Micro Movie Theatre, a collection of short films by filmmakers of all ages. We might even bring home original artwork from the Juried Art Market.

“Salem is the funnest place I’ve ever been,” an 8-year-old acquaintance of mine declared a few years back, as we were leaving the city’s annual World Beat Festival. And while Salem may not have been the funnest place I’d ever been, I had to agree that the festival is indeed a very good time. Besides the multiple opportunities to sample tasty treats from more than 70 nations, the festival, now in its 22nd year, teems with dance performances; in 2019, these include headliners White Lotus Dragon and Lion Dance on Friday and DJ Prashant and the Jai Ho! Dancers on Saturday.

But that’s just the beginning—the weekend promises a global village populated by dancers of all ages performing cultural styles from all over. Look for Kúkátónón Children’s African Dance Troupe, Indonesian Performance Arts of Oregon, Céilí of the Valley, Casa de la Cultura Tlanese, Danza Azteca del Fuego, and Japanese Culture Society. Friday and Saturday night will both conclude with Polynesian fire dances by ASNG and Paradise of Samoa, which will certainly be one of the funnest finales I can think of to a jam-packed day of dance.

Our metropolitan neighbor to the north hosts two festivals this month, both focused on modern and contemporary dance from Pacific Northwest companies as well as from visitors well outside our area. The Seattle International Dance Festival opens with Art on the Fly, a free, all-ages outdoor event with dance classes, live performance and sustenance from local food trucks. Shows continue over three weekends; the marquee names are veteran performers—New York-based Molissa Fenley Dance Company and San Francisco’s Robert Moses’ Kin. But there are newer talents, too, and a breadth of styles to explore, from the Indian culture-inflected contemporary dance of Mumbai’s Sumeet Nagdev Dance Arts to Tchekpo Dance Company, which twines together modern and African dance techniques. Choose a weekend or ingratiate yourself with Seattle-based friends and relations and stay for the month.

Longtime arts presenter On the Boards, meanwhile, offers the NW New Works Festival with an eclectic mix of multimedia and multi-genre performers: disciplines span drag to sculpture. In the movement realm, look for two Portlanders: KT Kusmaul, founder of Body Home Fat Dance, a company designed to expand movement performance opportunities for fat performers; and Claire Barrera, a queer Xicanx artist/educator whose specialty is performed ritual. Street dancer/performance artist Naomi Macalalad Bragin, visual and dance artist Jenny May Peterson, and dance-theater-music-horticulture enthusiast LanDForms (whose individual components are Leah Crosby and Danielle Doell) are among the other movement-minded artists on the bill. Want all the juicy details? Seattle-based contributor Sandra Kurtz shares the best bets at both fests here. [link]

That’s one of three new contemporary dance works on the bill: a second (title to be announced) comes from NW Dance Project artistic director Sarah Slipper, who produces a piece on lost love, inspired by Pablo Neruda’s poem, “Tonight I Can Write the Saddest Lines.” And Hannover, Germany-based choreographer Felix Landerer turns in his third piece for the company, “All’s Been Said,” a physically intense 15-minute trio that, ironically, considers our collective paralysis in combatting climate change. The show is also a chance to see the company’s newest hires, and marvel at the company’s collective artistry and technical chops.

There’s no secret handshake required to get into SoLow Fest PDX performances (as far as we know), but you do need a certain amount of insider knowledge: shows are spread out across town, some in as-yet undisclosed locations.

SoLow was originally a Philadelphian creation, but it has moved West with a similar intent: to present new, experimental solo work in an inclusive fashion. For movement fans, the highlights are likely to be Clown Bolero, Julie Brandenberger’s not-unprecedented pairing of clowning and ballet, which takes some cues from Belgian choreographer Maurice Béjart’s sinuous treatment of Ravel’s Bolero. The show takes place June 13th-15th in an apartment at 29th and Belmont: viewers will receive the address when they sign up for tickets online.

Professional Fools goes for physical comedy of the Monty Python-Andy Kaufman variety in their June 15-16 show Me Myself and I: the audience participation portion begins when viewers email to ask for the North Portland address where it takes place. Myia Johnson deploys movement improv in I Howl Nonsense to the Moon, a treatise on depression and self-harm held June 14, 19 and 21 at the Deep End Theater (211 SE 11thAve.) Zoe Edmiston shares her dual passions for language and dance June 13th and 20th in Embodied Prose, which invites viewers to participate through language or movement means; the setting, in Portland’s Peninsula Park Rose Garden, should be at its scenic and olfactory peak by then. The same may or may not be said for Michel Schorsch’s physical theater-dance piece Of Eiko (date TBD), which situates itself next to a swamp in Forest Park, somewhere near the Audobon Society: bring breadcrumbs just in case.

That leaves the June 18-22 return of Ordinary Devotions, the solo work Linda Austin staged earlier this year as a kind of meditation on the aging body and the fascination to be found in ordinary objects. It will be housed, as before, in Austin’s PerformanceWorks NW space at 4625 SE 67th Ave. (For more, see Elizabeth Whelan’s interview with Austin about the show here: https://www.orartswatch.org/linda-austins-ordinary-devotions-is-a-peculiar-playground/)

It’s that bittersweet time of year for dance families: the year-end show, which simultaneously shows off the physical and artistic progress young performers have made throughout the year and signals a final bow for graduates as they head off into the wider world. The Portland Ballet gives its dancers and viewers a varied season closer: In George Balanchine’s neoclassical Concerto Barocco, the dancers (two lead ballerinas backed by a corps) embody the musicality of the score, Bach’s Concerto in D minor for Two Violins. Danish choreographer August Bournonville’s 1800s-era Le Conservatoire, set in a Parisian ballet school, offers performers a chance to absorb that choreographer’s particular technique (as seen here most recently in Oregon Ballet Theatre’s production of Napoli) and test their acting chops. And in Plant Dreams Deep, a new work choreographed by the Career Track dancers with Josie Moseley, dancers stretch their technique and their dancemaking skills. Because the Career Track is designed to simulate a professional company experience, these dancers often show exceptional ability, the by-product of a 25- to 30-hour weekly training schedule requiring technique classes, rehearsals and performances.

The biggest news in this season-closing program depends on your point of view. For my money, it’s that Oregon Ballet Theatre has added its first-ever Alvin Ailey work to the repertoire, which would be testament enough to American-made artistry; the fact that it’s set to Duke Ellington’s music means we get a double dose of American excellence. The Ailey company describes Night Creature as a Graham- and Horton-infused homage to “night owls and jazz babies … strutting, leaping and slinking through a variety of dance idioms as they flaunt and flirt with each other and the audience”; to polish the all-important physical and aesthetic details, OBT brought in Ailey rehearsal director Ronni Favors to coach and clean the work.

On the other hand, if you’re a Trey McIntyre fan—as so many of us Portland dance lovers are—you might be more excited about the return of Robust American Love, McIntyre’s heartfelt paean to the wide-open landscapes and free-living ethos of the Wild West, set to the rootsy sound of Seattle indie band Fleet Foxes. If you thrill to the idea of world premieres, OBT has one of those, too: Big Shoes, a new work by BodyVox founders Jamey Hampton and Ashley Roland, which finds musical inspiration from usual suspects like Philip Glass and the Kronos Quartet, but also DJ Spooky. If all of this sounds good, you might be glad to know that OBT’s 30th anniversary season will also feature an Americans program, with work by Twyla Tharp, Agnes de Mille and former OBT AD James Canfield.

Test your dancemaking skills at #Instaballet, which returns to Capitello Wines this month as part of the Lane Arts Council’s First Friday ArtWalk. Eugene Ballet veterans Suzanne Haag and Antonio Anacan devised this simple but intriguing concept: create a new piece in real time, based on movement suggestions from viewers. The dance takes shape between 5:30 to 8 p.m. as art walkers stroll by and add their input. The final work, a truly collective effort, is performed at 8 p.m. Hang around to see the creative process or come back later, after you’ve wandered, to see the final product. All ages are welcome to contribute, and dance experience isn’t required—neophytes just might have the freshest ideas. (For more on the genesis of #Instaballet, see Gary Ferrington’s feature on its creators: https://www.orartswatch.org/crowd-sourced-choreography/)

In another showcase for above-average youngsters, dancers from Oregon Ballet Theatre’s school and OBT2, a pre-professional program for dancers 18-22, test their mettle in a program of new and perennially popular works. OBT company members Peter Franc and Matthew Pawlicki-Sinclair give us a glimpse of their choreographic skills with the works they’ve contributed to the bill; Spanish national Nacho Duato, already well established as a contemporary choreographer, is represented by Rassemblement Pas de Deux, set to music by Haitian composer Toto Bissainthé. And then there are the sort of works you expect to see from a professionally minded ballet school: Raymonda Etudes and Balanchine’s Serenade: Jerome Robbins’ family-friendly Circus Polka, and curtain closer Grand Défilé (“Big Parade”), a kind of balletic victory lap for the cast. 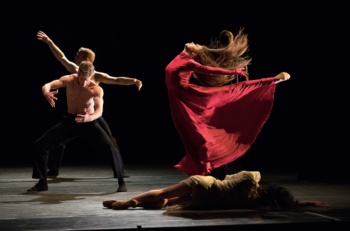 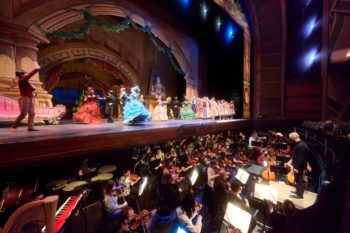