And finally, premiere a brand new hybrid work featuring all-female music and set in a gritty Portland warehouse? They are about to tick that box, too. 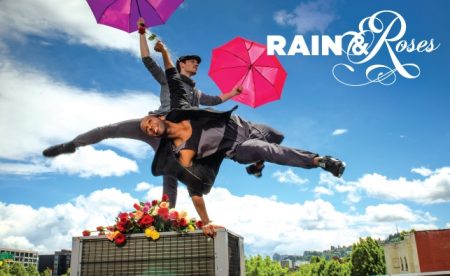 It’s not too late to witness the Portland-based dance company as they check that last box and conclude a whirlwind of a season. Rain & Roses opens this weekend, May 10-12, and continues the following weekend, May 17-19, in the North Warehouse, 723 N. Tillamook Street.

Here are five reasons why you might want to check your own Rain & Roses box:

You can satisfy all of your dance needs in one swoop: From tap, to aerial, to BodyVox’s signature dance-theater style, Rain & Roses wanders widely. When I talked to Hampton on the phone earlier this week, I asked him if Rain & Roses—conceived and choreographed by Hampton, Roland, and company members Daniel Kirk, Alicia Cuatia, and Jeff George—was a look back at the past 20 years or a precursor to the next chapter for BodyVox. “It’s exactly where we’re at right now,” he said. BodyVox shows, he said, tend to be a reflection of the people they are working with. For example, Cuatia’s choreography, set to the music of Fiona Apple, is an exciting aerial piece in which she dances alongside the other company members in a harness, soaring through the air. This approach, which utilizes the special capabilities of their current set of dancers—keeps BodyVox evolving.

The show’s got Girl Power to go around: “It’s all-female, and it’s all-powerful,” Hampton said of the music for the program. When Hampton and Roland began the creation process for the Rain & Roses, they knew they wanted female artists for the score. “It’s not because men have had enough,” Hampton remarked, “It’s because it’s irrelevant.” Once they’d laid the groundwork for a female-powered show, the #MeToo campaign was in full swing and the Time’s Up movement had gained major traction in response to the allegations against Harvey Weinstein. “We made a show about the times without knowing it,” Hampton exclaimed. The works are set to songs by artists including kd lang, Fiona Apple, Alicia Keys, Gillian Welch, and Bjork. Roland’s aerial piece is set to a Yoko Ono song. “It’s beautiful. It’s weird. It’s our ten o’clock piece,” Hampton said.

Live music!: To top it off, Rain & Roses will be accompanied by BodyVox’s House Band, led by Michael Papillo, and featuring Portland’s Galen Clark, Jason Okamoto, and L.A.-based singers and musicians Holland Greco, Katy Pearson, and Tim Bulkley. Every song exemplifies a different chapter in the development of the dancers’ characters. BodyVox has been a friend of live music lately. Two weeks after performing alongside Imani Winds, one of the most successful chamber music ensembles in the country in late April, the company is jamming out to Bjork.

It keeps Portland weird: Warehouses and art go together like nerds and Reddit. Rain & Roses is installed in the North Warehouse, just off North Interstate Avenue, and the location informs the show with its raw, gritty and industrial-beautiful background. Back in March, when I went to see BodyVox resident artist Katie Scherman’s work, Hampton’s curtain speech included his witty pitch for Rain & Roses: “You drive up I-5, park your car on the shoulder, and rappel down into the warehouse, and there you are at our show,” he joked. For those less adventurous, there’s street parking, too.

There’s a dance party planned for intermission: Dust off your dancing shoes, and get ready to bust a move, because Zia McCabe—percussionist, keyboard player, and bassist for The Dandy Warhols—is DJing the intermission. Hampton chuckled while he explained that he tells his friends to come to his shows “because they aren’t shows.” It’s more of a communal experience—a way to join people together through dance, art and life.

Showcasing the company’s innovative style, Rain & Roses has everything that makes our rainy, Rose City one of a kind: wit, whimsy, and Portland weird.