Dance review: ‘Waters of the World’ is a liquid love story

The Fair-Haired Dumbbell building on the corner of Martin Luther King Jr. Boulevard and East Burnside is one of Portland’s newest and funkiest creative office spaces. The New York Times described its exterior as “florentine wallpaper” and the dumbbell-shape design features multiple sky bridges connecting its two six-story buildings. This is the location of site-specific choreographer Heidi Duckler’s latest work, Waters of the World, an homage to the Northwest, its abundance of water, and the fluid possibilities of movement.

Duckler is based in Los Angeles and Portland and leads two creative teams of movers, musicians, and artists. Since 1985, she’s crafted almost 300 performance installations between the two cities and around the world. Earlier last week, her company parked a school bus outside the BodyVox studio and danced within, under and around the bus while audience members watched from the sidewalk. There seems to be no location Duckler can’t turn into a space for dance.

Three days after the bus performance, Heidi Duckler Dance Theatre/Northwest was back at it, bringing life and art into the Fair-Haired Dumbbell. Upon arrival, audience members took the elevator up to the fifth floor where Duckler directed them to the performance space: an empty room, walls punched by variously-sized windows looking out upon the city in all directions.

For the performance, Duckler posts up behind a handheld projector and aims its beam of light at company member Kya Bliss, who’s encapsulated by a semi-sheer white fabric that stretches across the length of the floor. The natural light streaming in illuminates her limbs as her torso warps like a sunbathing record. The projection (a shimmering, oily and colorful abstraction created by Eric Rauh) wanders around the space, sometimes landing atop Bliss’ body and transforming her into a moving work of art and other times resting in a corner of the room that moments before was blank space. Within these first few minutes we can catch of glimpse of Duckler’s ability to see what is considered mundane—a white drywall—as a space with great potential for creativity.

As the movement relocates within the room and transitions to a duet, the audience shuffles around, finding a new station to observe from. These moments are part of what make site-specific dance so unique—the audience subtly contributes to the work as a whole, moving around, redefining the space, and making choices on their own as to how much distance is appropriate to leave between themselves and the performers. At any moment their space as a viewer could become the next focal point for the show.

When I interviewed Duckler earlier this week, she explained that this aspect of the work is one of her favorites. She explained how watching dance in a theater “can be very visceral, and wonderful to feel. Site-specific work offers a new experience that allows you to get closer to the artist and their work. The audience has to make choices, rather than being passive within the performance.”

Dressed in cerulean swimsuits that travel back in time to the Sixties, Erin DeLaney and Jenny Windom begin their duet, an homage to the mystery of the sea set to a reading of Brazilian short-story writer Clarice Lispector and accompanied by live pianist Jennifer Wright. The choreography washes around the corner they dance in, and Duckler’s interpretation of the text through movement ripples through their bodies as thoroughly as the words explore the intrinsic connection between a woman and the ocean. “Their mysteries only meet if one surrendered to another,” the voiceover says, and the pair undulates towards and away from one another, their bodies unfolding like waves onto the shoreline. DeLaney and Windom are well-paired, their presence is delightful and powerful, as they smile at one another with the playfulness of children one moment and then the next, assume a mature approach to the poetic and layered choreography.

The performance shifts to the other side of the room, and we’re met with two spinning white umbrellas. Behind the slow cyclical repetitions, we can see out into the city, where Friday night traffic is zooming over the Burnside Bridge as the sun casts its final rays over the West Hills, illuminating the clouds in hues of orange and navy and silhouetting the slender poles of the Fremont Bridge. Dancers Keil Moton and Conrad Kaczor emerge from behind the umbrellas, their bodies mimicking the droplets of water projected on the wall behind them. The men shake and vibrate, and their movements reverberate through the unfinished space.

Wright’s melodies carry the work into the final section, which features the full cast. The projector fills the white costumes with images of choppy waters, and soon the movements of the dancers and the water merge. The shadows of bodies dance within the contrasts of the waves as they splash across the walls and spill onto the floor. Duckler’s choreography is sometimes frantic, sometimes smooth… unpredictable and satisfying. Wright is just as innovative with her music as she plays her “destroyed” piano—all of the woodwork stripped away revealing the inner workings of the instrument.

After the show, Wright explained how she accomplished her wonderfully experimental sounds during the show. After removing her shoes, she can position her foot in such a way on the strings beneath the keys so that the pressure of her foot against them creates a full range of sounds within just those notes. Her exploration of the creative potential of the instrument brought the whole performance full circle—an amazing collaboration among dancers, musician, choreographer, and lighting designer.

As the work came to an end, the dancers positioned themselves each at a window overlooking the west side of the city. With the sun setting on cue, Wright’s music winding down, and their movements sealing off the voyage of Waters of the World, it seemed as if Duckler had nature on command in this moment… a perfect meeting of artists and the outside world. Each dancer gazed out their respective window, all at different heights and different vantage points. The movement would occasionally link up, but was defined by the level at which the windows positioned them.

The company exited quietly without a flourish, and the audience members replaced them at the windows, further blurring the watery line between dancer and viewer. Waters of the World proved to be a liquid love story to Portland.

Waters of the World repeats next weekend, at 8:30 pm, July 22-23, in the Fair-Haired Dumbbell, 11 NE Martin Luther King Jr. Boulevard. 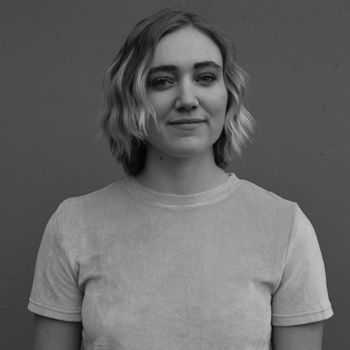