I had a magical moment this week while I was walking my dog: I suddenly found myself in a world of yellow. You see, my dog likes to smell the wet ground around the bases of trees and it was in one of these dozy, idle moments that I snapped awake and realized that I was completely surrounded on all sides by big, beautiful, bright yellow leaves. It was a profoundly beautiful scene to be standing in the middle of, and completely electrifying. It woke me up, heightened my senses, and made me see things I hadn’t seen before. This, too, is what art does. It pops you into new spaces, wakes you up, and makes you see things differently. This week, DanceWatch offers many opportunities to do just that. Enjoy!

Ainza is a dance and somatics educator and the artistic director of Michele Ainza Dance (MAD), a Portland-based contemporary dance troupe that focuses on the deconstruction and abstraction of social and political issues through physical, idiosyncratic movement material. Ainza has taught at Lewis and Clark College, Linfield College, Fresno City College and Mexico’s University of Veracruz.

¿LISTEN?
ELa FaLa Collective and Polaris Dance Theatre
November 9-17
Polaris Dance Theatre, 1826 NW 18th Ave.
The two-act concert ¿LISTEN? features work by Polaris Dance Theatre artistic director Robert Guitron and Brazilian choreographer Barbara Lima, artistic director of the new Portland-based ELa FaLa Collective. Lima, whose work aims to bridge art, technology, culture, education, and science, will present a solo that expresses her frustrations, deep sadness, and power as a woman fighting to survive during this tumultuous time. Guitron presents a multimedia commentary on the current political landscape and calls for kindness, unity and love; he will invite the audience to join the dancers on stage in the final moments of the dance.

Cloth
PDX Contemporary Ballet, artistic director Briley Neugebauer
November 9-11
New Expressive Works, 810 SE Belmont
In Cloth, a new work that opens her company’s season, PDX Contemporary Ballet artistic director Briley Neugebauer uses the imagery of a white dress to signify womanhood, tradition, potential, and the passage of time. Inspired by Richard Yates’ novel Revolutionary Road, this work for 10 ballet dancers will be performed in the round to give it three dimensions, and will be largely accompanied by Robert Schumann piano pieces. The work questions whether we make our own choices or are just following in the footsteps of those who came before us. 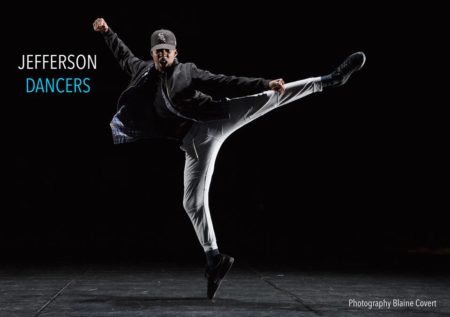 Critical Engagement Series with Hannah Krafcik + Emily Jones
8 pm November 10
Flock Dance Center in the Disjecta Contemporary Art Center, 8371 N Interstate Ave., Studio 4
Food, drinks, and post-show discussion
In this month’s Critical Engagement Series, Portland dance artists Hannah Krafcik and Emily Jones share work they have been developing in their New Expressive Works Residency. “We’ve realized our work together means pulling ourselves out from one another,” Krafcik and Jones said in a statement. “Right now, in this process, we are leaning into our similarities and the antagonism that come with them, and the intimacy that feels possible and also impossible because of them. We are believing in the ways we know how, testing our faith and also trying to have fun while we can.”

The Critical Engagement Series, according to curator/dance artist Tahni Holt, “brings together audiences and choreographers in hopes to reveal some of the mystery surrounding the languages around dance and the unique practices of individual choreographers. We start with the question: What does the choreographer need at this particular moment in their process and how might this also serve the wider community.”

Unfolding-a dance film premiere
Muddy Feet Contemporary Dance, SubRosa Dance Collective, and director Dylan Wilbur
6:30, 7:15, and 8:00 pm November 11
Studio Northwest, 2250 NW 22nd Ave, #511
In this dance film, we follow an anonymous woman through a day in her life as she experiences daily pressures, information overload, desires, fears, and delights. In a dreamlike state, Unfolding explores the pull between determination and anxiety and the balance between surrender and endurance.

Join the cast and crew for a post-show celebration with behind-the-scenes footage and photos, plus refreshments and a raffle.

La Sylphide
Bolshoi Ballet in Cinema-Live from Moscow
Presented by Fathom Events, BY Experience and Pathé Live
12:55 pm November 11
Click here for movie locations
The Bolshoi Ballet performs August Bournonville’s La Sylphide (restaged by Danish choreographer Johan Kobborg) in a live simulcast from Moscow broadcast into a movie theater theater near you. La Sylphide tells the tale of a young Scotsman who, on the morning of his wedding day, is wakened by a kiss from an ethereal winged creature. Entranced by her beauty, he risks everything to pursue an unattainable love.

The Hip Hop Nutcracker featuring MC Kurtis Blow
Decadancetheatre, artistic director Jennifer Weber, featuring Kurtis Blow
Presented by Portland’5 Centers for the Arts
November 13-14
Keller Auditorium, 222 SW Clay St.
Set in Brooklyn in the 1980s, this contemporary Nutcracker is performed to Tchaikovsky’s original Nutcracker Suite mixed with hip-hop. The story follows Maria-Clara and her prince as they travel back in time to the moment when her parents first meet in a nightclub.

This evening-length production, choreographed by Brooklyn-based Decadancetheatre artistic director Jennifer Weber, will be performed by a dozen all-star hip-hop dancers to a live DJ on stage, accompanied by an electric violinist. Rap legend Kurtis Blow emcees.

The Nutcracker and the Four Realms
Walt Disney Pictures
Featuring Misty Copeland, Sergei Polunin, and Lil Buck
Opened in theaters November 2
Click here for movie times and locations
Warning: this is not a dance-centric film and it is not The Nutcracker as you know it. But it does feature choreography by Royal Ballet resident choreographer Liam Scarlett. and spectacular dancing by American Ballet Theatre principal Misty Copeland (here dubbed Ballerina Princess), Ukrainian ballet dancer Sergei Polunin (as the Cavalier), and street dancer Lil Buck as the Mouse King. Loosely based on Marius Petipa’s The Nutcracker Ballet (which, in turn, is based on E. T. A. Hoffmann’s story The Nutcracker and the Mouse King), this is a Narnia-meets-Harry Potter-meets-Alice in Wonderland-style fantasy adventure tale. Morgan Freeman is Drosselmeyer, Helen Mirren is Mother Ginger, and young actress Mackenzie Foy is Clara, who travels to the so-called Fourth Realm to retrieve a key that will unlock a box containing a precious gift and restore harmony to an unstable land.