This week I am excited to introduce you to Hair and Other Stories, a new collaborative work by Brooklyn-based Urban Bush Women (UBW). The piece blends dance, theatre, voice, and visual elements, focusing on hair and specifically African American women’s hair, and Urban Bush Women use it as a platform to discuss race, gender, identity, body image, and economics. The work, presented by White Bird, opens at the Newmark on Thursday, March 1, and runs through March 3.

I am also personally thrilled to introduce Jawole Willa Jo Zollar and UBW to you because Zollar was one of my dance teachers at Florida State University way back in the day. I was also very fortunate to perform in her work Shelter, a dance about the physical and emotional deprivation of homeless people, and to receive a full scholarship to the very first Summer Leadership Institute on undoing racism and creating a new dancer for a new society. Working with Zollar and UBW opened up my point of view to a much broader concept of what dance could be, what a dancer could look like, and to new ideas of how to move and live in the world.

Hair and Other Stories, described by the company as the “urgent dialogue of the 21st century,” actually began its development in 2001 as Hairstories, a work by Zollar and the company at the time, that discussed the cultural significance of black women’s hair through a collection of individual women’s hair stories and humor.

Zollar founded the company in 1984 and has received many awards for her work, including three Bessie Awards and two Doris Duke Awards. These days, she has taken on a different role in the company’s creative process and is the project’s dramaturg. This updated version of Hair and Other Stories has been choreographed by associate artistic directors and company dancers Chanon Judson and Samantha Speis in collaboration with the company dancers, and it’s directed by Raelle Myrick-Hodges with costumes by DeeDee Gomes, projection design by Nick Hussong, and lighting by Xavier Pierce.

Celebrating it’s 34th year, UBW “seeks to bring the untold and under-told histories and stories of disenfranchised people to light through dance.” They do this “from a woman-centered perspective and as members of the African Diaspora community in order to create a more equitable balance of power in the dance world and beyond.”

The company’s core values include: validating the individual; catalyzing for social change; building trust through process; entering community and co-creating stories; celebrating the movement and culture of the African Diaspora; and recognizing that place matters.

In a behind-the-scenes video of Hair and Other Stories, associate artistic director Samantha Speis explains that what we will see in the performance “is our practice. This is what we are doing and you have an hour and 15-20 minutes to be inside of that and experience it and examine some things about yourself. It’s also really about lifting everyone’s humanity because we’ve all been dehumanized by the construct and its about understanding how we all sit inside of it.”

You can also catch a preview of the work in the companies teaser here.

In a video interview for The Pew Center for Arts & Heritage in 2016, Zollar, discusses her evolution as a choreographer and the importance of embracing risk throughout her practice. “Risk,” she says, “exists on the edge of failure…so if you’re not right on that edge of failure…you’re not in a place of risk. Living on that edge and learning from that edge to me is a really exciting place.”

For Dance Magazine earlier this month Zollar opened up about her creative process, and the hardest parts of sustaining a dance company.

“I have a three-idea rule: Whenever I see other performances, I have to come out with three ideas—maybe it’s costumes, lighting, staging. Don’t dismiss anything. If it was a waste of your time, you didn’t enter with the right mind-set.”

Kinky Boots
Presented by Broadway in Eugene
7:30 pm March 1
Hult Center for the Performing Arts, Silva Hall, 1 Eugene Center, Eugene
Inspired by a true story, Kinky Boots follows Charlie Price, an aspiring young businessman who is forced to give up his dreams in order to save his late father’s shoe factory from the brink of bankruptcy. He finds unexpected inspiration in the form of Lola, an entertainer in need of some sturdy stilettos. As Charlie and Lola work together to turn the factory around, the pair find that they have more in common than they thought possible. Changing your perspective can change the world. 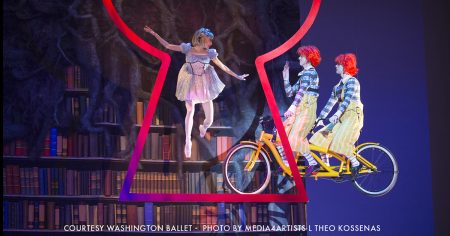 Alice (in wonderland)
Choreography by Septime Webre, performed by Oregon Ballet Theatre
March 1-March 4
Keller Auditorium, 222 SW Clay St.
Follow Alice and a zany cast of characters down the rabbit hole into the unknown in Septime Webre’s 2012 retelling of Lewis Carroll’s Alice’s Adventures in Wonderland and Through the Looking-Glass. This large scale production, which marries tradition with modernism with the help of ballet and acrobatics, boasts an original score from composer/violinist Matthew Pierce, to be played by the OBT orchestra, costumes by designer Liz Vandal, and sets by James Kronzer. The production includes a cast of 100 dancers, 50 of whom are children from The School of Oregon Ballet Theatre.

Part-autobiography, part-‘80s nostalgia, part-drag fantasy, Bund’s solo follows little Wayne on his quest to become a drag queen called Feyonce. “He struggles with self-doubt about where his inspiration comes from and is taken to an appropriation fantasy. He is judged by Judith Butler, his ego, and his mother, until he lets go of his dreams and finds a new lineage.”

Left of Center
A-WOL Dance Collective (Aerial Without Limits)
March 2-March 4
A-WOL Dance Center, 513 NE Schuyler St.
Celebrating their 15-year anniversary season in their spacious 5,000-square-foot warehouse home, A-WOL Dance Collective, a 13-member company that combines aerial arts and dance, will create an immersive experience in the round with a haunting soundscape and Victorian-era costumes weaving together “a fantastical tale suspended between reverie and reality…enveloped in a dream state free of the limitations of the waking world.”

ZORRO® The Ballet is an exploration of Zorro’s “complexities and the forces…The son of an aristocratic Spanish landowner and a Native American female Tongva, he becomes …two distinct people…lover of peace and wisdom—and Zorro, force of change.” In the shapeshifting context of a world in flux, “Zorro is formed, a great hero is born, and the legend begins.”

Chitra: The Girl Prince
NW Children’s Theatre, Co-directed by Sarah Jane Hardy and Anita Menon
12:00 pm and 4:00 pm March 3
Mainstage, NW Children’s Theatre, 1819 NW Everett St.
In this retelling of a fourth century tale from the Mahabharata, co-directors Sarah Jane Hardy and Anita Menon along with a collaborative team of theater artists, musicians, and dancers from India and Portland’s Bengali-American community, tell the story of a warrior princess who struggles to stay true to herself while balancing her responsibility to her people and true love’s call.

Voices: A Choreographers’ Showcase
Presented by PDX Dance Collective
March 3-4
BodyVox Dance Center, 1201 17th Ave., Portland
PDX Dance Collective, a collective “founded by a group of friends lamenting that there are so few opportunities to perform as a dancer when it’s not your professional career,” will present a variety of regional choreographic voices in their second annual showcase. The works featured focus on issues surrounding female empowerment, sexaul assault, body image, identity, societal expectations, anxiety, and finding one’s voice, to name a few.

The Flames Of Paris
Alexei Ratmansky with original choreography by Vasily Vainonen
Bolshoi Ballet in Cinema Live from Moscow
12:55 pm March 4
Playing in theatres across Oregon and Washington. Check the website for locations.
In a live broadcast all the way from Moscow to a movie theatre near you, the Bolshoi Ballet will perform Alexei Ratmansky’s revival of Vasily Vainonen’s The Flames of Paris. Originally premiering in 1933 at the Bolshoi Theatre in Moscow, and created as political propaganda by the Soviet authorities at the time, this “revolutionary” ballet takes place during the French Revolution and tells the story of a brother and sister who set off to fight for freedom and find love on the way.

The Promise of ‘Opacity’: Takahiro Yamamoto’s ‘Opacity of Performance’