Demanding to be seen in a faceless bureaucracy

Mohamed Asem is a man between countries and cultures, which puts him squarely at odds with bureaucratic systems that crave neat little scribbled-in circles. When everything is carefully defined, there are fewer choices. No gray area. Nothing to consider or worry about. So what happens when it isn’t?

Asem is a man of independent means with no permanent ties, free to explore the world when and how he chooses. Yet he learns abruptly, rudely, and quite painfully that “where” is not always a possibility. Not all doors are open to him. In his short memoir (131 pages), Stranger in the Pen, newly published by Portland’s Perfect Day Publishing, Asem recounts in his understated prose how he’s detained overnight at Gatwick Airport in London in July 2016, a few days after the Bastille Day terrorist attack, in which a semi-truck drove through crowds in Nice, France, killing 86 people.

Like a film lens moving in and out of a close-up, throughout the airport story Asem deftly weaves in memories and details about the rest of his life, one that defies categories and easy identification so that it stymies Border Control agents. Born in California and raised in Paris and Kuwait, he’s not truly at home anywhere.

His accent doesn’t fit no matter what language he speaks. He’s comfortable with family and friends in Kuwait, but his introverted ways (so “Western”) make him a tough fit in a culture that is so social, and his perpetual single status inhibits his ability to buy property so he can have privacy and write. On top of that, he’s light-skinned because his ancestors moved to Kuwait from other countries, so even in a Kuwaiti airport he’s often asked to get in a line for non-citizens. Where does the meta stop?

People have always traversed the globe, but more and quicker transportation options have evolved in only a few generations, helping human migration spread even faster. It’s not uncommon now for citizens to be of the world, to have a global identity rather than to be grounded to one spot. Perhaps, sadly, that accounts some for the rise of nationalism and the backlash against immigration. Basic fear of the bigger world, the unknown. Everything is moving so fast!

At a time when the world necessarily becomes more fluid in many forms — including economics, cultural, social, and racial – and people desperately need to come together to solve issues that could have devastating effects for generations, Asem’s experience is a rich window into the price everyone pays for myopic, foolish policies that aren’t welcoming to all people. 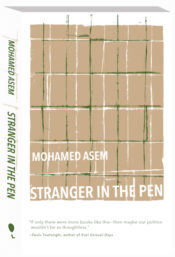 Considering Asem is not asking for a job in the UK or government subsistence, the UK only hurts itself by not benefiting from his money that supports the family-owned butcher and grocer in his London neighborhood, the wine bars and coffee shops, the taxes. Nothing says you’re not wanted like a nightmare at the border, any border. And it’s certainly something to make a person rethink whether they want to stay in a country, citizen or not.

Though overnight detention may seem like a minor inconvenience compared to major world catastrophes – like climate change or the devastating effects of the war in Yemen (are those horrific photos of starving children bothering you yet?) – the sum of Stranger in the Pen serves as a timely real human story in the face of headlines everywhere. Immigration, nationalism, Brexit.

And this is coming from a man of means arriving at an airport. Imagine the poor, the starving, the war-torn refugees, and people fearing for their safety. Imagine a migrant caravan. For them, we send armed soldiers who have to give up Thanksgiving with their families and who instead could be helping people. Some fire-ravaged areas in California could use a hand.

Asem’s story is a good reminder of the harm that can be caused when we let fear be our guide, when we are conditioned to respond to dog-whistles instead of handshakes, when we build barricades instead of bridges. Are we trying to protect ourselves by keeping out potential danger, or are we putting ourselves in a prison and threatening our own safety?

One of the many heartbreaking stories of the California fires was about a man who was trying to open a metal gate so a caravan of cars could get through. The fires overcame him and he ran and jumped in a creek to save himself. When he returned later to the gate, all the cars were burned.

Asem is settled in Portland, for now.

My own Portland-born and -raised college-student son stood in the Gatwick airport only a few months ago, in those same queues at customs for “Others,” or non-UK/EU citizens, within sight of where Asem endlessly waited in the holding pen and was denied admittance. My son, anxious because he had lost key documents proving his study program and travel plans out of the UK, sailed through questioning in a few minutes, the benefit of being Caucasian and not named Mohamed.

One of the quiet pleasures of this book, something that isn’t about plot or structure or anything that moves along the story to the next destination, is the opportunity to learn about Asem’s own family in Kuwait; to recognize that just like my family, they drink tea and play cards, chide each other, and marvel at sea shells. And, like people everywhere, they worry about having a safe haven.

Laura Grimes is the executive director of Oregon ArtsWatch. She worked as a journalist at The Oregonian for 24 years, where for most of that time she produced features sections. She occasionally writes quirky essays when the muse strikes, and has published in The Oregonian, Oregon ArtsWatch, and Art Scatter. When she’s not keeping ArtsWatch in line, she’s the marketing and public relations manager for The Portland Ballet. Always a sucker for cute kids, she spent several years growing arts programs in schools and working to improve playgrounds.