Dink’s Terrorgasm of a good time

Spectravagasm, Portland’s bastard step-child of the stage, is back! Spectravagasm, which is entering its second weekend at the Shoebox Theatre of a late-night run that continues through October 27, is an anarchic blend of theater, music, comedy, commentary, improvisation and audience participation. It’s been around for six years and is the last piece left from the theatrical meteorite that was Portland’s enfant terrible, Post 5 Theatre. This year’s offering is titled Terrorgasm and has absolutely nothing to do with terrorIsm. Spectravagasm’s resident mad scientist, Sam Dinkowitz, was thinking more about the season — Halloween — than about today’s headlines. “My dad asked me why I didn’t call it Horrorgasm and all I could say was, ‘Oh. Good question.’” 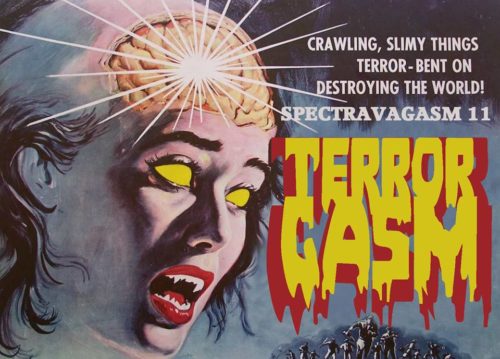 The terror in Terrorgasm is not necessarily the typical tropes of horror: werewolves, vampires, flesh-eating zombies and the like. Terrorgasm is about the real-life, everyday horrors as seen though a Halloween lens. “Of course, we’re afraid of turning into a wolf at a full moon or afraid of some demon that sucks your blood out or afraid of the living dead eating your flesh, but on a real, day-to-day basis we’re afraid of getting a ticket, or finding out our girlfriend’s cheating on us, or paying the water bill.” After all, who would you be more scared by if they showed up at your door? The Creature from the Black Lagoon or the IRS? If your answer is the IRS (and for most of those reading this, it is), then Terrorgasm is the show for you.

The cast is chock full of Portland theatre luminaries; Joe Gibson (“Joe’s getting his Spectravagasm cherry popped”), Philip Berns, Jessi Walters, Jessica Tidd, Jim Vadala, Keith Cable, Heath Koerschgoen, Brett Wilson, and the prodigiously gifted Diane Kondrat. Collectively, along with Chris Beatty on piano and Dinkowitz himself, that is a very expansive skill set. One can expect craftsmanship along with the chaos and the mayhem.

Spectravagasm is the twisted, chaotic, nimble, inventive, irreverent brain-child of its leader, Dinkowitz. “Dink”, as he is lovingly known throughout the theater scene, is the Joker of Portland theater, its clown prince of crime. Talking to Dinkowitz feels like someone dropped a drug in your drink without telling you. Like, crystal meth. His energy is palpable, intense, his brain constantly moving, darting from one thought, one idea, to another. Dinkowitz’s conversation is an always-entertaining blend of casual profanity liberally peppered with references to Aristotle, Shakespeare, Ibsen and the history of theater. A lot of times he’s not speaking in complete sentences, because he only has just enough time to get out whatever words are necessary to convey an idea before another idea comes crashing through and demands that you pay attention to it. Other times, a sentence starts one way and then seems to gather parts of other sentences as it barrels along its way. It’s surprising, after you’re deep into it, when you realize you’re actually following what he’s saying.

It makes sense, then, that this would be the leader of Spectravagasm. When asked how he decided to keep Spectravagasm going even after Post 5 folded, Dinkowitz declares that quitting was never an option. “I never thought for a second that I would stop. For me the challenge wasn’t, ‘Am I going to keep it going?’ The challenge was, ‘Where am I going to do it now?’”

For all his manic energy, Dinkowitz is as committed and multifaceted a theater artist as you will find in Portland –– an actor, writer, director and fight choreographer who can sing a little, too. He recently won a Drammy award for his work in last October’s Year of the Rooster at CoHo (he played a champion killer fighting cock, Odysseus Rex) and had won one previously for his stage combat in Wait Until Dark, a play in which I was his director and in which he also performed (as the sadistic murderer Harry Roat, naturally.) His passion for the art form is undeniable, and so is his need to break from theater’s so-called rules and protocol.

“It’s me turning inside out. It started out as this cathartic thing for theater people. Because there is so much rigidity and rules with theater. What you can and cannot do on stage. What you can and cannot do in rehearsals. And I love that. I love the rules. There are definitely parts of the theater –– like punctuality; that’s super important. But I think there are some ideas of our approach to theater that are holding us back. How much rehearsal do we actually need? How quiet does it actually have to be in the rehearsal space for us to do what we need to do? And yeah, different shows need different processes for sure.

“But where Spectravagasm comes from is my desire to get out my ya-yas and to allow other people to get out their ya-yas. There are all these things I’ve always wanted to do on stage or say on stage and to be able to do it in this safe bubble and yeah, still be able to go to my other professional jobs and do that shit and obey the rules and not ad lib and these kinds of things but then to come to Spectravagasm and exercise with other muscles, where you upstage but with respect. And how do you ad lib without making a three-hour show? Flexing these muscles that are really special to live theater but there aren’t enough scripts that allow it. And with me as the director/playwright on the scene, you wanna change a line, you wanna alter a scene, we don’t have to send a fucking email about it, it happens right now. We build it and we workshop it together.”

In other words, while Spectravagasm may look and feel chaotic and anarchic, those are merely seasonings in a very rich dish, a dish that is carefully crafted by talent and skill. But this shouldn’t be an act of artistic angst but artistic playfulness. “It definitely comes from this root to play. To put the play back into a play. You know, we forget, when you’re doing like this hard-core drama we forget, it’s called a fucking play. It’s not called a stress, it’s not called a cry, it’s not called a be-sad-about-it, it’s called a fucking play. Even if you’re doing Arthur Miller, you’re still dressing in funny clothes and talking loud so they can hear you in the back.”

Dinkowitz hopes that sense of play is mirrored by the audience. What he is decidedly not interested in is staid, “respectful” theater, where the audience sits quietly and passively observes what is going on. Part of Spectravagasm’s structure is specifically designed to encourage that. “That’s that fun gray area that I love to live in. The script is what it is, but it’s not Mamet where we’re sticking to these pauses. The text is important but it’s also important to connect to the audience and that’s where that triangle of theater exists. It’s not just your scene partner any more in this, it’s also the audience. What are they giving you? How do they want that punchline delivered? Do they want you to say ‘fuck’ more — or less? Do they need it louder? Do they want a longer, slow burn? And if you are total Ibsen and build that fourth wall nice and thick, so you can’t receive what they’re giving you, you’re detaching from what makes live theater alive.”

Dinkowitz, and by extension, Spectravagasm, is hell-bent on breaking down and doing away with all of the theatrical conventions that make the average American stay away in droves. “We did the seventh Spectravagasm was called Shh … art which was like this idea that like at the ballet, it’s fucking quiet, you’re at the theater you’re fucking quiet, you’re at the art gallery, you’re fucking quiet, that art only exists in this vacuum of sound.” He speaks longingly of what Shakespeare used to be, ”with the dick jokes and the groundlings throwing oranges and having sex in the mud, and then like the smart jokes for the royalty in the boxes. But now we have this thing where we have to be quiet and we have to listen to the language and how they deal with the pentameter, and it becomes, ‘That’s what I’m going to be talking about while I drink some wine and have my Gouda on crackers.’”

“I want to hear people cheering at the Mona Lisa like they’re at a Zeppelin show. Rock concerts get super-animalistic, like primal shit around a fire. We (theater artists) just don’t get that. And that’s left over from Reformation-period bullshit where we’re super quiet and ‘cultured’ (his voice veritably drips with contempt) in the theater. No, no, no, let it out, man. People should be shouting. Art should be making people go crazy.”

Just how crazy is hard to say. When it’s pointed out that the same audiences that were having sex in the mud at Hamlet were also buying trinkets at the latest stake-burning, Dinkowitz grudgingly admits that today’s audience is more civilized. “We’re definitely growing past that animalistic thing of gladiatorial combat, but that’s where the Romans had their shit together: ‘We want to kill a couple of birds — and some Christians. Here’s what we’ll do: we’ll entertain the people and teach them the consequences of their crimes, sell some fruit, build a coliseum.” Dinkowitz, pauses, smiles: “That’s not what we’re trying to do with Spectravagasm, of course.”

Perhaps. But if that smile said anything, it was that with Spectravagasm, he’s taking nothing off the table.

Spectravagasm 11: Terrorgasm continues at 10 p.m. Fridays-Saturdays through October 27 at the Shoebox Theatre, 2110 S.E. 10th Ave., Portland. Seating is limited, with a capacity of about 35. $10. Information here.

Bobby Bermea is an award-winning actor, director, writer and producer. He is co-artistic director of Beirut Wedding, a founding member of Badass Theatre and a long-time member of both Sojourn Theatre and Actors Equity Association. Bermea has appeared in theaters from New York, NY, to Honolulu, HI. In Portland, he’s performed at Portland Center Stage, Artists Repertory Theatre, Portland Playhouse, Profile Theatre, El Teatro Milagro, Sojourn Theatre, Cygnet Productions, Tygre’s Heart, and Life in Arts Productions, and has won three Drammy awards. As a director he’s worked at Beirut Wedding, BaseRoots Productions, Profile Theatre, Theatre Vertigo and Northwest Classical, and was a Drammy finalist. He’s the author of the plays Heart of the City, Mercy and Rocket Man. His writing has also appeared in bleacherreport.com and profootballspot.com.

DramaWatch: Welcome to the Cuomo Collaborative