When lead actor Richie Stone in Broadway Rose's musical "The Evolution of Mann" is sidelined by Covid, director Isaac Lamb takes the stage for opening night.

Notwithstanding President Biden’s recent pronouncement that the Covid-19 pandemic is over, you might say that the state of our Union is sick. Or at least still susceptible.

Going to a play these days seems to be one of the only ways to be amidst a crowd of people in which nearly everyone is masked, but that’s hardly the only lingering Covid effect. Two weeks ago, for instance, Imago Theatre opened a show called Lumen Odyssey, a sci-fi-ish original piece by Jerry Mouawad. The next afternoon, though, the company canceled the remainder of that weekend’s performances because of a Covid case, and a few days later announced that the entire run of the show had been scotched. (Imago has since indicated that the show is “postponed until next season.”)

And then there’s Isaac Lamb’s case, which one suspects is leaving him more tired than usual.

Lamb, a popular Portland actor and director, didn’t catch the bug, but you might say that his show did. He’d been working at Broadway Rose in Tigard, on a musical called The Evolution of Mann, about the romantic travails of a thirtysomething New Yorker. With a cast of just three actors, the show centers on its titular character, Henry Mann, to be played by Richie Stone.

At least that was the plan.

“We found out on our first day of tech that he tested positive,” Lamb says. “He’d been symptomatic for a few days and had just been Zooming into rehearsals. So when he got his test results, our options were pretty limited.”

Options, that is, for replacing a lead actor, with no understudy and barely a week until opening night. If only there was someone around who could act and sing and had lots of performing experience, and maybe even already had some familiarity with the material!

And so it is that Lamb will find himself onstage in the role of Henry Mann for this weekend’s performances. Stone is expected to resume the role next weekend. (Also on opening night, Friday, Douglas J. Cohen, one of the show’s creators, will be on hand for a pre-show discussion. Cohen composed the music and collaborated on lyrics with Dan Elish, who wrote the show’s book, based on his novel Nine Wives.)

Lamb has appeared in many shows as a member of Third Rail Rep, the CoHo Clown Cohort and elsewhere – mostly recently at Portland Center Stage in a standout production of August Wilson’s Gem of the Ocean. His work for Broadway Rose, though, has become another interesting career specialty – overseeing what might be thought of as boutique musicals, newer, lesser-known shows with small casts and (sometimes) quirky conceptual underpinnings. In Evolution of Mann, as in Adam Gwon’s Ordinary Days and Kim Rosenstock’s wondrous Fly by Night, love and New York are common core elements.

Broadway Rose leaders Dan Murphy and Sharon Maroney first encountered the show a few years ago at a convention of the National Association of Musical Theatres, Lamb says. “I think it’s maybe only been produced twice. Any time they bring me this kind of show it’s an opportunity to cut my teeth developing new-ish shows. I enjoy that Dan and Sharon see that as a lane for me.

“The songwriter, Doug Cohen, also wrote a show that Broadway Rose did a few years ago called No Way to Treat a Lady. Joe Thiessen, who’s a good friend of mine, was in that and he spoke very highly about working with Doug.”

The process of developing a musical can be extensive – sometimes even after the show has premiered. Such has been the case with The Evolution of Mann.

“The first versions were not especially well-received in terms of the sexual politics,” Lamb says. (Headline on 2018 review in The New York Times: “in ‘Evolution of Mann,’ Fumbling Cuteness Goes Only So Far’.)

“Some of the feedback they got at first was that it was a somewhat misogynistic take on dating. So I think they’ve been very courageous in reworking and reframing the material. They went in and tried to find ways to make the women characters more real and incorporate their points of view.”

Those women characters primarily are Henry Mann’s roommate, played here by Kortney Ballenger, an actor from Tennessee, and his varied love interests, played by Kailey Rhodes. These figures, Lamb admits, “arrive as archetypes but then spend the rest of their time onstage becoming more complicated. As a director, I’ve been focused mostly on letting that same kind of shape drape over the entire story.”

Certainly having Rhodes in the cast gives a director something strong to work with. “This show puts all her comedic skills to use, and she’s an exceptional actress and comic,” Lamb says. “She takes these characters drawn with primary colors and makes them real people. And that’s exactly what this show needs.”

Yes, that and a director who can step into the breach.

Fading like the summer are Triangle Productions’ farce The (One-Act) Play That Goes Wrong,  a program of short works from Sowelu Ensemble, Theatre Berk’s adaptation of A Midsummer Night’s Dream at Milwaukie’s Chapel Theatre, and adouble bill of David Mamet’s An Interview and Christopher Durang’s The Actor’s Nightmare at Astoria’s cozy Ten Fifteen Theater.

Speaking of pandemics and other widespread calamities, The New York Times reports that more than 145 million people have seen The Phantom of the Opera in more than 41 countries over the past 35 years. But there’s new hope for the world’s aesthetic well-being: The Broadway production at long last will close in February.

A few days ago, Artists Repertory Theatre announced the hiring of the company’s next artistic director, Jeanette Harrison, who told ArtsWatch that one of her goals in Portland will be to “continue expanding the canon” of plays by and about Native Americans. Which reminds me of one of my favorite past Artists Rep productions, The Ghosts of Celilo. Though the principal creator of that musical was a non-Native – Marv Ross, who’d led the hit 1980s rock band Quarterflash – members of several Northwest tribes were key contributors throughout the show’s decade-long development process.

This month marks the 15th anniversary of the show’s premiere. And I’m pleased to find that a recording of Ghosts of Celilo (separated into Act I and Act II) can be viewed on YouTube: Click on the links:

The best line I read this week

“(C)lose reading, even when it finds the subject sorely wanting, is the very foundation of romance.”
— Rachel Syme, in The New Yorker, describing the ethos behind the work of the journalist/novelist/filmmaker Nora Ephron.

DramaWatch: Chicken, biscuits … and what? 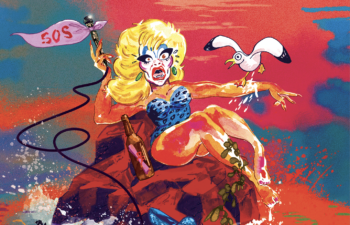