"Bones and All" revels in the sins of the flesh; Spielberg looks at anti-Semitism in America; Portlander Mark Gustafson co-directs "Pinocchio."

It’s not often that a filmmaker has two films opening in the same year, much less the same week (at least Portland-wise), that are more different than Luca Guadagnino’s pair of new offerings. Bones and All is a no-holds-barred, ultra-dark love story between a pair of road-weary cannibals. Salvatore: Shoemaker of Dreams is an admiring, straightforward, utterly polite portrait of the famed shoe designer Salvatore Ferragamo. It appears that Guadagnino, like all of us, contains multitudes.

Bones and All reunites the director with Call Me By Your Name star and willowy heartthrob Timothée Chalamet. But it’s young star Taylor Rogers who truly impresses in this blood-and-hormone soaked story as the teenaged Maren, who flees home after her urge to consume human flesh overcomes her.

Maren, it turns out, is an “Eater,” cursed with the unending appetite to cannibalize. Bones and All is, in part, the story of her entry into the underground community of people like her. She’s helped at first by Sully (Mark Rylance, doing his usual droll menace), a carnivalesque figure sporting a braided ponytail and a sidelong grin. But before long she hooks up with Chalamet’s Lee, and the pair end up on a journey together, each hoping for answers about long-lost family. Along the way, they dodge dangers like those presented by a pair of rural flesh-eaters played by Michael Stuhlbarg (also from Call Me By Your Name) and, oddly, director David Gordon Green.

Guadagnino isn’t interested in world-building, explaining exactly how these Eaters survive while maintaining some ethical boundaries (most of them do try!) or outlining the “rules” of their affliction. He’s into capturing the raw carnality of attraction, and the addictive push-pull of young, intense romance. He’s got a great couple of actors for that purpose: fine young cannibals, indeed.

Bones and All is stunningly shot, Midwestern vistas captured with lyrical intensity and movie stars impeccably lit. As usual with Guadagnino, the romantic excesses are pushed to the very limit, leading to a finale that straddles the line between the sublime and the ridiculous. And the movie gets a few extra points for the gutsy decision to open on Thanksgiving week. (Playing at Cinema 21 and other area theaters.)

If, somehow, gratuitously gory goo-goo eyes isn’t your preferred genre, then Salvatore: Shoemaker of Dreams might be a better option. Taking its title, and much of its narration, from Ferragamo’s 1955 memoir, the documentary traces a remarkable tale of immigrant success. To hear Ferragamo tell it, he was an example of someone who made a brilliant career doing the one thing on Earth he was put here to do: design shoes.

Born in a small Italian village, he studied in Naples as a child and had his first shop by the time he was 12. Emigrating to the United States shortly thereafter, he found his way to California and the nascent motion picture industry. As Hollywood grew, so did his renown: he shod Rudolph Valentino, Greta Garbo, and just about every other American silent film star.

Returning to Italy to open a factory, he was nearly done in by the Great Depression, and then fascism, but emerged in the postwar years as a byword for luxury footwear. He died in 1960, but his name, as any fashionista knows, lives on.

Fashion experts, including fellow shoe gurus Manolo Blahnik and Christian Louboutin, weigh in on Ferragamo’s legacy. So, quite amusingly, does Martin Scorsese, who naturally is full of anecdotes about the early days of Hollywood and eager to share them. The whole things wraps up with a Busby-Berkeley-inspired montage starring enough of Salvatore’s handiwork to give even the most jaded cobbler a shoegasm. (Playing at the Living Room Theaters.)

Oh yeah, there’s also a new movie from Steven Spielberg, just in time for the holidays. The Fabelmans is being touted as his most personal film yet, and on a literal level that’s certainly true. It’s a very memoir-ish story about a boy, Sammy, who grows into a movie-mad teenager (Gabriel LaBelle) while negotiating family drama between his parents (Michelle Williams and Paul Dano) and his dad’s best friend (Seth Rogen).

Williams is stunning as Mitzi, Sammy’s free-spirited, piano-playing mom, even if the dichotomy between her and her hyper-logical computer whiz husband is overly familiar. She brings a healthy dose of patriarchy-induced pathos and messy emotion to the role. Judd Hirsch shows up for an amusing cameo as Sammy’s Uncle Boris, and Chloe East stands out as Sammy’s fervently Christian high school girlfriend.

Each of those supporting characters points at one notable aspect of The Fabelmans: Spielberg’s depiction of the anti-Semitism he experienced growing up. This isn’t 1930s Poland or 1972 Munich he’s capturing; it’s 1960s Santa Barbara, but the invective and violence Sammy experiences still come across like a slap to the face. Of course, it’s increasingly apparent that picking on Jews never really went away, but to see it in this context remains bracing.

The Fabelmans also shines light on Spielberg’s fondness for stories that feature domestic discord, either implicitly (Eliot’s absent father in E.T.) or explicitly (the discord between Richard Dreyfuss and Teri Garr in Close Encounters of the Third Kind). Spoiler alert: Sammy’s parents have a rough go of it eventually. Another one: The movie ends with Sammy getting a job at a movie studio and meeting John Ford (played by another director in a cameo that’s far too good to reveal).

The film is, of course, immaculately directed: Spielberg again demonstrates his mastery of composition and his ability to enhance both plot and character through unobtrusive but devious camera movement. There’s a nagging sense, though, of restraint, as if Spielberg has to hold something back. Unlike directors such as Michael Powell or Martin Scorsese or Alfred Hitchcock, there’s little sense of the innate danger or perversion of the film director’s calling; no ambivalence about the moral issues raised by controlling reality and capturing lies. To Sammy, and Steven, making movies is the most natural thing in the world. (Playing at area theaters.)

There’s also a new film from Guillermo Del Toro opening this week, and right now I’d peg it as an odds-on favorite to net Del Toro another Oscar, this time for Best Animated Feature. Best of all: if that happens, he’ll be sharing the prize with Portland stop-motion wizard Mark Gustafson, who co-directed. The Portland-shot Gulliermo Del Toro’s Pinocchio embraces its stop-motion medium and retells Carlo Collodi’s 19th-century story as a fable set during the rise of Italian fascism.

Narrated by a cricket (Ewan McGregor) not named Jiminy, this is a version of the story that, as you’d expect, goes darker than the 1940 Disney movie. (All props to that film’s nightmarish whale sequence, however.) Instead of a boy in lederhosen with geometric body parts, this Pinocchio is an awkward wooden biped. When his nose grows, it’s not as a straight line but a crooked tree limb.

The expected set pieces are here: Pinocchio runs away to the circus run by the villainous Don Volpe (Christoph Waltz), gets visited by the Blue Fairy (here a truly unsettling creature voiced by Cate Blanchett), and, yes, ends up in the belly of a whale. Unfortunately, there are several terrible, treacly songs to put up with. But the visuals are extraordinary—this is another Netflix film that more than warrants a big-screen viewing. (Playing at the Hollywood Theatre, Cinemagic, and other area theaters.) 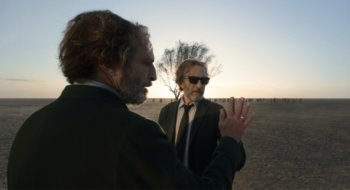 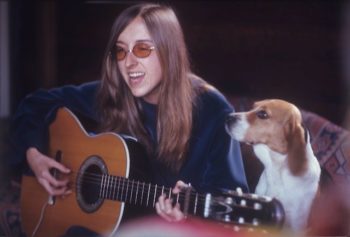