Memorial Day Weekend was, until fairly recently, considered the start of the summer movie season. More refined fare would give way to popcorn entertainment for the masses. These days, the summer movie season feels like it runs from March through January, but fortunately it’s still possible to find movies that aspire, however imperfectly, to something more than blunt sensory spectacle and finely-honed witticisms. (Not that there’s anything wrong with either of those things!) Playing this week in Portland are a pair of documentaries about the artistic process, a couple of British films set about 150 miles apart, and two gripping early efforts form the director known as “the French Hitchcock.”

Sometimes it feels, among the community of hardcore cinephiles, like there’s a competition to see who can live a life most consumed by movies. Bleary-eyed participants undertake film-fest endurance tests, watching four, five, even six movies in a day. (I know, I’ve been one.) Blogs and social media posts testify to the central, even borderline unhealthy, role the seventh art plays in the lives of its most dedicated cultists. But in terms of devotion to the art, and in particular to its most obsessive practitioner, no one can top Tony Vitali and his single-minded service to the vision of Stanley Kubrick, as chronicled in the compelling documentary “Filmworker.”

Vitali was an up-and-coming British actor who scored his biggest break to date when Kubrick cast him in his 1975 historical epic “Barry Lyndon.” Vitali proceeded to attach himself to Kubrick’s hip for the next two decades, becoming an indispensable jack-of-all-trades (and master of most of them). One of his first big jobs for Kubrick was casting the role of young Danny Torrance in “The Shining.” His last was putting the finishing touches on “Eyes Wide Shut” after Kubrick’s death, and he continues to serve as a one-man quality control division for the director’s legacy. In between, he worked himself nearly to death assisting on everything from production to distribution to archiving.

Kubrick, as you might guess, was not a gentle master, and many of those interviewed in “Filmworker” express a sort of perplexed admiration for Vitale’s endurance and persistence. They include “Full Metal Jacket” star Matthew Modine, “Barry Lyndon” star Ryan O’Neal, and, for some reason, Swedish star Stellan Skarsgård. Director Tony Zierra doesn’t demonstrate much technical facility—many of the interviews are inconsistently and harshly lit—which is ironic for a film so concerned with a cinematic perfectionist. Those expecting any grand or novel insights into the enigmatic Kubrick will be disappointed, since even Vitali doesn’t seem to have penetrated the master’s opaque shell.

But the documentary does function as a tribute to Vitali as an archetype for all the below-the-line labor without which movies would not exist. Every hard-working grip, gaffer, runner, second assistant director, and camera operator should be able to identify with the sweat and sacrifice on display here—even if most would agree that he took things to extremes. It’s also an excellent appetizer for the newly struck, “un-restored” 70mm print of Kubrick’s “2001: A Space Odyssey” that the Hollywood will be showing this week, and that more than likely even exists because of some effort or other on the part of Tony Vitali.

(“Filmworker” is currently playing at the Hollywood Theatre. “2001: A Space Odyssey” screens Tuesday, May 29, through Sunday, June 3.)

“Beast” is set on the isle of Jersey in the British Channel, where twentysomething Moll (Jessie Buckley) is chafing against the obnoxious family she still lives with, especially after her own birthday party is upstaged by a relative’s pregnancy announcement. She bolts the bash, and ends up dancing the night away at a club with a stranger who later refuses to take no for an answer. Enter the handsome, enigmatic Pascal (Johnny Flynn), who chases away her assailant with a well-placed warning shot. Soon the two are enmeshed in an intense relationship, which becomes especially problematic when Pascal is named as the prime suspect in a raft of recent murders. All of the victims were teenaged girls—is Moll next? Or do the occasional flashbacks that gradually reveal violence in Moll’s past mark her as the title character?

The poster and title design for “Beast” hint at a revisionist take on a classic fairy tale, and that’s probably part of what writer-director Michael Pearce, making his feature debut, was going for. But, despite textured performances from Flynn (a musician by trade, he wrote the lovely theme song for the British TV show “The Detectorists”) and Buckley, the movie tries too hard to have it both ways. Ambiguity piles on ambiguity until every successive revelation packs a diminishing punch. Still, the 37-year-old, Jersey-born Pearce shows promise as both a storyteller and a stylist.

The French director Henri-Georges Clouzot, who would go on in the 1950s to make such timeless works of suspense as “The Wages of Fear” and “Diabolique,” crafted some lesser-known but still very worthwhile films a decade earlier, and the Northwest Film Center is showing brand-new digital restorations of two of them this weekend. Each has been described as an example of film noir even though they were made before that term entered common usage (and in one case, before it was even coined). “Le Corbeau” (aka “The Raven”), released in 1943, is a chilling tale of small-town paranoia in which a doctor suspected of performing abortions is taunted by an anonymous extortionist who also sends ‘poison pen’ letters to several of the villagers. Clearly made in and reflecting upon an era of occupation and collaboration, it was heavily criticized from both the left and right, which means Clouzot must have been doing something right. “Quai des Orfèvres” (aka “Port of Shadows,” which is much easier to pronounce) came out in 1947, and sets a triangular relationship between a couple of struggling artists and a wealthy potential benefactor against a backdrop of Parisian side streets and smoke-filled nightclubs.

(Both films screen, with separate admissions, Friday through Sunday at the Northwest Film Center)

“Ladybird” star Saoirse Ronan first earned wide acclaim, as well as the first of her three Oscar nominations, for her performance in director Joe Wright’s 2007 adaptation of Ian McEwan’s novel, “Atonement.” Now Ronan tries to return the favor, bringing her considerable star power to bear on a rather uncompelling filmic version of one of McEwan’s minor works, “On Chesil Beach.” It follows a budding historian and a violinist over the course of their honeymoon weekend on the southern English coast in 1962. As they move inexorably towards consummating their union, his eagerness and her terror at the prospect, the sources of which are revealed in flashbacks, threaten to create a permanent rift between them.

The period details are perfect, and the performances of Ronan and co-star Billy Howle (who also appear together in the upcoming  film version of Chekhov’s “The Seagull”) are convincing in their precisely 1962 level of pre-sexual-revolution, panicked, dysfunctional lust.  But longtime theater director Dominic Cooke, making his first feature, doesn’t bring much cinematic verve, and ultimately the narrative, with McEwan adapting his own book, is simply too slight, and the approach too clinical, to support an entire film.

(“On Chesil Beach” is currently playing at the Regal Fox Tower)

“Boom for Real: The Late Teenage Years of Jean-Michel Basquiat”: It might seem that after being captured on film in his prime in “Downtown 81” (which was shot in 1981 but unreleased until 2000), memorialized in the form of Jeffrey Wright (his first major film role) in Julian Schnabel’s 1996 biopic “Basquiat,” and mythologized in the 2010 documentary “Jean-Michel Basquiat: The Radiant Child,” the movie wouldn’t have much more to contribute to the legend of the New York City street artist who died in 1988 at the iconic age of 27. But, as this archival-footage-packed, narrowly focused tribute from independent filmmaker Sara Driver demonstrates, the artist and the Lower East Side scene he helped create are endlessly fascinating.

Interviews with Basquiat’s contemporaries and/or collaborators include Lee Quinones, the essential Glenn O’Brien (of “TV Party” fame), Fab Five Freddy himself, and Jim Jarmusch, Driver’s life and artistic partner. This is her first directing credit in over twenty years, and while it uses a relatively conventional form, it celebrates a subculture of rulebreakers whose influence on popular culture today cannot be overestimated. 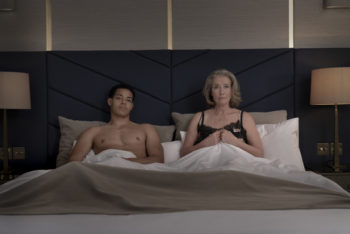