The story of African Americans in Oregon has too often been a tale of erasure. From the frequently unacknowledged racist origins of the state’s long legal exclusion of black immigration, to obliteration of neighborhoods and displacement of communities of color, to stifling of voices of protest, stories of African American Oregonians that don’t fit the dominant culture’s whitewashed utopian image have been suppressed, ignored, or forgotten.

As more Oregonians — and Americans in general — belatedly recognize the stubborn persistence of our legacy of racial injustice, calls for change grow louder. Yet it’s hard to move forward without knowing where you’ve been. And Oregon’s African American history contains stories of inspiration as well as intolerance. “Things have changed, but history is not erased by change,” wrote Zadie Smith, “and the examples of the past still hold out new possibilities for all of us.”

It’s the culmination of an extended collaborative process involving a team of Oregon artists and historical organizations that began with producer Douglas Detrick, executive director of PJCE, and Portland singer Marilyn Keller, a Jazz Society of Oregon Hall of Fame member who became what Detrick called “the face and voice of this project.”

“Having performed old time blues and jazz from the ancestors,” as lead singer in Black Swan Classic Jazz Band, Keller insisted that “it had to be a project that spoke directly to my African American heritage.”

Built in 1923, Maxville, a railroad logging town near Wallowa that operated until the early 1930s, included 50 or so African Americans and their families. Vanport, hastily created in 1942 to house workers who came to Portland to build warships, numbered at its peak 40,000 inhabitants, making it Oregon’s second largest city, according to the Vanport Mosaic project. (Read Bobby Bermea’s ArtsWatch feature about the flood and the project.) The city was wiped out in the notorious 1948 Memorial Day flood, drowning or displacing thousands of African American residents.

“Both were places of refuge and opportunity to Oregonians of color, immigrants, African Americans especially, all coming to a state where they were not very welcome otherwise,” Detrick said. “We wanted to explore creatively why these places played outsize roles in the state’s African American history.”

Drawing on her journalistic skills, Mitchell researched the communities’ history. The Maxville Heritage Interpretive Center (whose founder/director Gwendolyn Trice joined the creative team) and Vanport Mosaic project provided essential information, and the creative team also embarked on a 2017 research trip to Wallowa County near the original Maxville site. But “we didn’t just want to impose our own thoughts and views,” Mitchell said. “We wanted to go out into the communities that had some knowledge about these two towns and chat with them. We asked, ‘What are the themes you want to hear in these songs?’“

In Joseph and Portland community meetings in fall 2017, they heard from descendants and other relatives of Maxville workers, and from Vanport residents, including Ed Washington, who was a child when the flood inundated his city.

Pearl Marsh, a California woman whose father and grandfather lived in Maxville, heard about the project and contributed to discussions in Wallowa County. “She said ‘the story of Maxville is a story of freedom,’ and that became a very important part of the piece,” Detrick recalled.

Based on their research, Mitchell wrote lyrics for seven songs, and Abioto created two short films depicting imagined moments in the life of the two vanished towns. Filmed in a park near the flood site, Water is loosely based on the childhood memories of Vanport resident Ed Washington, who appears briefly. (Abioto had helped edit a video about him for the Mosaic Project.)

Abioto imagined the story in Marjorie, about a logger’s wife dreaming about city life, after hearing and reading accounts of daily life in Maxville logging camps. “It was hard work living out there,” she said. “You didn’t really have the comforts of modern living. Some people were lonely. When we went to visit, it was snowing. The mountains were beautiful, but it felt dark. You’re with someone and you have to decide whether to follow your dreams or stay.”

After considerable collaborative back-and-forth with Mitchell, Abioto and Keller, Weiss set the words and images to music. But although his score incorporates blues, jazz, and some folk music, Weiss didn’t want to imitate the sounds of the 1930s and ‘40s. “The way music sounds to our 21st century ears, what constitutes tension or dissonance are different than they were 100 years ago, in the same way slang from the 1920s wouldn’t carry the same meaning today,” he explained. Just as West Side Story told the Romeo and Juliet tale in 1950s words and music, “if you want to get across the actual feeling of the time, you have to change the language.”

He decided to evoke the landscapes in the manner of jazz composers on Europe’s famous ECM record label — but inspired by Oregon mountains and rivers rather than Scandinavian fjords. He also knew how to write to the strengths of the 12 PJCE players, including Detrick on trumpet.

But Weiss was initially nervous about being a white composer writing music for an African American story. “I would not have attempted this without having a lot of my team members be African American,” he acknowledged. “The [jazz-based] music I write comes from African American traditions, and I definitely wanted to be telling a story of the African American experience and getting it from those sounds. But I wouldn’t have felt comfortable if I didn’t have Kalimah and Renee and Marilyn. It wouldn’t have been appropriate.”

Weiss ultimately looked to another tradition for context. “Would I be OK with a non-Jewish person writing Fiddler on the Roof?” he asked himself. “I can live with that — if you make sure that [the composer] is working with some Jewish people and listening to the Jewish community.”

The stories were essential, but music was a crucial element too. “When music is added, it allows people to lean in to the conversation,” Mitchell explained. “If we just went in and had some kind of lecture, people would not be engaged as much in this story. But we put it to music, and that allows people to absorb the message in a different kind of way. That’s what made this project successful. The music, the singing, the live jazz saxophone bring this life to the words that you wouldn’t get otherwise.”

From Maxville to Vanport premiered in April 2018 in Eastern Oregon and last May at the Vanport Mosaic Festival. PJCE released an album of the recorded music last November and a podcast episode.

“Probably the most meaningful moment for me was when we did it at Alberta Rose theater back in May,” Weiss remembered. “There were a lot of people who were descendants of Maxville workers in the audience. At the end they announced them and they all stood up. A number of them were in tears.” 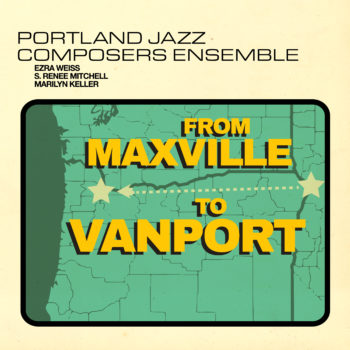 This year’s encore performances will feature a new element: the premiere of a short documentary film about the making of the project by Sika Stanton, who accompanied the team on its research trips, recording sessions, and performances. The OSU Jazz Ensemble opens the Corvallis performance, with the film screening at 8 pm, followed by the main event. At the Portland show, “The Making of ‘From Maxville to Vanport’” will be followed by a conversation with project collaborators, facilitated by Vanport Mosaic, before the music begins at 8 pm.

“The film gives us the opportunity to reflect a bit on what we learned and reflect on it,” Detrick said. “It’s a document of everything we did, some of the people involved and what they thought about it.”

PJCE hopes to take the project around and beyond Oregon, where it’s already having an impact by bringing back to life the strivings, struggles and successes of those courageous Oregonians from now-vanished towns, many of whom journeyed from the Jim Crow south to an unfamiliar, sometimes forbidding destination.

“They faced so many obstacles,” Keller muses. “They faced so much danger. To escape that meant risking your life and the lives of your family. We can take this all over Oregon, yes. But I think there are people all over the country who need to know how they built their lives, how they stayed in these states and these industries and succeeded against all odds.”

Mitchell believes the project’s impact extends even further. “In this day and age and political climate, it feels like we’re focusing on differences,” she said. “People feel different from me only because I don’t know enough about them to know how similar we are. These stories remind us of our similarities and our ability to work together, to open up our hearts to other people’s experiences and see they have the same hopes and dreams we do. Unless we tell those stories, people won’t understand our shared humanity. So it brings people together.”

Cranberries and the art of thanks