At first glance, the stage at the University of Oregon’s Thelma Schnitzer Hall looks like any other chamber music recital. A violinist and pianist sit/stand ready to perform Neil Rolnick’s Deal with the Devil. Look closer, though and you’ll see controllers (devices that trigger sound generators) mounted on violinist Jennifer Choi’s violin, resting on her music stand, and at her feet. New York new music star (and Portland native) Kathleen Supové’s piano is wired for treatment, as well. The composer is also on stage, facing a bank of mixers, black boxes, and a laptop.

Neil Rolnick’s Deal with the Devil starts out a lightly swung, jazzy duo with minimal electronic elements, but it swells into an expansive sonic canvas of interchange and interaction between acoustic instruments, their affected sound, and modulated sound samples. It is powerful, engaging music. Ten minutes in, however, I ask myself, “Why is the composer on stage?”

As the instrumentalists dig in to their virtuosity, a warped string orchestra of electroacoustic sounds emerges: a whorling cacophony that whips around the hall’s eight-channel speaker system, causing heads to swivel. In contrast, Rolnick’s performance is mundane. He pushes faders, twists knobs, wiggles his mouse, and peers at the laptop. He makes intermittent, quasi-conducting motions, without ensemble eye contact. Put simply, he appears out of place. Next to the impassioned gestures of the musicians, his presence is a distraction.

Nonetheless, with its crowd-pleasing, whiz-bang ending, the piece is a success. But my question remains: Why is the composer on stage? Luckily, I find answers in the program’s remaining pieces and during a later interview with longtime FMO director Jeffrey Stolet.

Music of the future, now

Future Music Oregon is the educational arm of the Intermedia Music Technology Center at the University of Oregon’s School of Music and Dance. Stolet has directed the center (formerly the music technology department) since 1988. The center is dedicated to “the innovative use of computers and other recent technologies to create expressive music and new media compositions.” FMO’s dual focus is on education and creativity and it offers bachelor, master’s, and doctoral degrees.

Back in the early ‘60s, celebrated American electroacoustic composer Jon Appleton, then a student at the UO, composed the first electronic music created at the university. Appleton’s materials were a pair of oscillators (tone generating devices) borrowed from the science department and a reel-to-reel tape recorder. 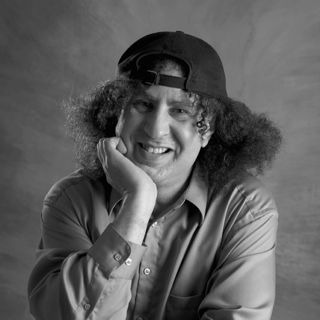 Stolet is amazed at the array of sounds Appleton was able to pull from such crude materials or “rocks” as Stolet calls them. In Appleton’s piece, there is no human performer. The composer’s only purpose at a performance would have been to press the play button.

The “triangle of artistry” or does a bear trigger sound files in the woods?

Electroacoustic music has come a long way since Appleton’s primitive efforts. Fast forward to today and FMO’s state-of-the-art facilities, where students are not only composing sophisticated music with sophisticated means, but also actually constructing the instruments to play the music — and then performing on those instruments. Each is a hybrid of instrument maker, composer, performer — Stradivarius, Beethoven, and Fritz Kreisler rolled into one. They embody what might be called a “triangle of artistry.”

Stolet says FMO provides a supportive, safe environment for students to experiment with available technology, to succeed, to fail, to try again. However, it is paramount that students “understand conceptually what the fundamental, underlying structures of music technology are.”

With that understanding, students then transform everyday devices–Wii game controllers, Wacom tablets, suitcases(!)–into instruments of their time, that have direct meaning in their lives. Gone is the weight of history of traditional orchestral instruments. Stolet believes that, for students to achieve any kind of authenticity, they must not be overshadowed by the greatness of the past.

A successful expression of this approach at FMO’s November concert was Nathan M. Asman’s Kaurios. Asman performed with what looked like a pair of wooden bear paws, inset with lighted buttons or keys. In fact, the paws were fashioned from 20,000-year-old, peat-bog-preserved wood from New Zealand. The instrument construction and subsequent piece composed for it, were the culmination of Asman’s studies at FMO.

A performance of ‘Kaurios’ by Nathan M. Asman

In his performance,  I was not distracted by the composer’s presence. The devices seemed a part of him, and his interactions with them were relaxed and intuitive. He moved the instruments gently, twisting and turning them like a bear testing the air, or contemplating its paws (it helped that Asman is a handsome bear-like fellow!), and the piece played out like a kind of crude bolero, very melodic, with pleasing diatonic dissonances.

Still, I wanted to see him up and moving around (he sat at a desk), embodying the technology, melding with its music. (Given that it is the School of Music and Dance–Stolet was the music director of the dance department for many years–how about offering some movement classes for FMO students?)

Freeing music of the oppressive weight of tradition has its downsides.  For example, Stolet said, the creation of electroacoustic instrument families wasn’t possible, because technology changed so swiftly. I wondered aloud whether that rate of change might negatively impact the “triangle of artistry.” I imagined piles of electronic instruments gathering dust in forgotten storage units, casualties of artists’ lust for new tech.

“It’s a challenge,” Stolet responded. But he has often observed, in students’ work, that one point of the triangle–construction, composition, or performance–can inform and influence another point, thereby picking up the slack. He added that regardless of the tech involved, students’ time management skills and efficiency are essential to fulfilling the potential of the FMO approach.

At the November concert, Yifan Wu had performed his A Glove with Some Sensors for a custom made performance interface: black glove and chest mounted controllers. Wu successfully embodied the technology. With classic bad-guy hand motions (think Darth Vader silencing an underling or Saruman choking Gandalf from afar), Wu manipulated and molded ominous sound files and thrust the results upon the audience: dark, demonic, and darn effective.

Couldn’t a family of clothing instruments be developed based on this technology in such a way as to be adaptable to technological advancements or to actually influence and direct those developments? We’ll have to wait and see.

But really now, must the composer be present?

I asked Stolet about the career benefits of composers being performers as well as instrument builders. “If you want to hear my music you have to hire me,” he replied.  In other words, Stolet is a brand. He is his music. He composes (often employing indeterminant elements, and scalable durations, making each performance unique) by exploring the instruments he’s created, finding their sweet spots, pulling out their best sounds. Like the music of Jeffrey Stolet? Want to present it live? You got to call Stolet because nobody else can play it. Now that’s some serious job security.

It’s also the kind of musical corporeality I would like to see more of in live electroacoustic music–a following in the footsteps of composer-performer pioneers Harry Partch and Lou Harrison (both built their own instruments as well). Stolet agreed. He feels that, unless the audience sees the performance, observes the performer, it is impossible to grasp the full meaning of electroacoustic music. And in my mind, if the act of performing is as artful as the music, the audience’s experience is heightened; hence, my dance lessons suggestion above.

Stolet is passionate about the development of a “music of our time,” free from the weight of Western musical history, and he is committed to training the artists who create it.

“Electronic music is probably one of the most humane applications [of technology] that one can imagine…” he says. ”I’m not using it to sell you shit…Facebook is a surveillance business. Here [at FMO] we’re talking about taking the idea of data, taking the idea of technology that’s available to us now, the rocks that are lying around…and creatively repurposing them to be expressive and to tell our story.”

Who better to tell this musical story than the artists who build the instruments of today, compose the music of today, and perform it for today’s audiences?

Tiana Husted’s Dollhouse, an interactive sound and light installation, that was presented during the intermission of FMO’s November concert, did away with the composer entirely. A Victorian dollhouse was set in the middle of a room and lit from above. Observers were encouraged to interact with the dolls and furniture within to trigger sounds and lighting, creating atmospheres unique to the moment. In a sense, Husted had transcended the “triangle of artistry” to ascend into a “godhead of artistry” by becoming the all-creator of a small world, simply suggesting possibilities that the denizens (dollies) brought into being through their relationships with unseen forces (the audience). A micro-mythology if you will.

So, why the composer? Why indeed. In 1925, Henry Cowell shocked the musical world by standing up at a performance of his The Banshee, reaching into the piano, and strumming and thumping the strings within. Last November, Nathan M. Asman became a musical bear with 20,000-year-old paws, and Yifan Wu reached into the audience, grabbed the listeners’ hearts with his black-gloved hand and squeezed, all the while raining sonic doom and gloom down upon them. Perhaps, in another 90 years, a person will walk through a climate-changed ecosystem (or storm-decimated city) and smell, and hear, and see a symphony through technologically advanced sensory organs. And who will be the composer then?

FMO’s Spring Concert is 7 pm, March 9, in room 163 at the University of Oregon School of Music.

When our voices are raised together: Singing at Portland’s Maybelle Community Center