Hispanic Heritage Month, Sept. 15 to Oct. 15, is designated as a time to celebrate the contributions — not just in arts and culture, but in all human endeavors — of Hispanic and Latino Americans. It started as Hispanic Heritage Week in 1968 under President Johnson and, thanks to legislation by U.S. Rep. Esteban Edward Torres, a California Democrat, was expanded by President Reagan to a month-long observance in 1988.

Perhaps due to the proximity of Día de Muertos (Day of the Dead) celebrations as October turns into November, public events fill out the calendar during this month. That, at least, is true in Yamhill County, where — no surprise here — the Chehalem Cultural Center in Newberg has packed October full of Hispanic theater, music, and dance. Linfield College in McMinnville and George Fox University in Newberg are also getting into the act, so let’s take them in chronological order.

Oct. 15: PROFESSOR CURTIS ACOSTA is a teacher with a story to tell, one that has made the pages of Yes! magazine and was the subject of the documentary Precious Knowledge. He was among those who developed a Mexican Studies program serving 1,500 high school students in Tucson, Arizona, in 1998. Although it was successful by a number of measures, it generated a politically motivated backlash in 2010, culminating in a law that banned the class. Long story short: Teachers, parents, and students got mad, got organized, and filed a legal challenge that was ultimately successful, with the curriculum being reinstated three years later.

Acosta, who is on the University of Arizona faculty, will speak Oct. 15 in the Canyon Commons of George Fox University in a presentation titled Victory in Arizona: Defending the Rights and Education of Chicanx/Latinx Youth in an Era of Hate and Anti-Intellectualism. Seems like a timely topic. The talk is scheduled for 7 to 8 p.m. and is free and open to the public.

Oct. 19: SON DE CUBA: Portland-based quartet Son de Cuba has roots in the Latin, African, and jazz traditions, blended with beats from modern and classic Latin songs. Band members Nelson Morales, Freddy Vilches, Levis Dragulin, and Tony Glez come from Cuba and the United States. Doors at the Chehalem Cultural Center’s Grand Ballroom open at 6:30 p.m., and the music starts at 7 p.m. Beer, wine and non-alcoholic beverages will be available for purchase. Cost is $10 for adults, and youth 18 and under will be admitted free. Arts for All tickets, for holders of Oregon Trail Cards, will be available for $5 at the door.

Oct. 20: LINFIELD COLLEGE will hold its Hispanic Heritage Celebración from 1 to 5 p.m. Oct. 20 in the Rutschman Field House on the McMinnville campus. The celebration will feature live music, student performances and activities such as piñatas, face painting and bouncy castles, as well as a variety of Latin food. The event is free, family friendly and open to the public. It is sponsored by Spanish Club, Mecha, LCLA, ASLC, Diversity Grants, Global Languages and Cultural Studies, Student Affairs, and Multicultural Programs and Services. For more information, contact Beatriz Rendon at brendonb@linfield.edu.

Oct. 31: COMMUNITY OFRENDA (MEMORIAL): We return to Newberg, where the public is invited to Butler Square, two blocks south of the Chehalem Cultural Center (on the corner of Howard and First streets), from 5 to 8 p.m. to add items to the ofrenda (literally, an offering) to celebrate the lives of family members who have passed. I’ll have more on Day of the Dead closer to the event, but the short version is probably familiar to you: Day of the Dead is celebrated in central and southern Mexico at the beginning of November. Indigenous traditions held that the gates of heaven open at midnight on Oct. 31, and the spirits of all angelitos (children) are allowed to reunite with their families for 24 hours. Then, the spirits of the adults come down to enjoy the festivities prepared for them.

Our friends at the Cultural Center explain: “The tradition of the ofrenda is to … greet the spirits when they arrive with candies, toys, tamales, chocolates, breads, candles, fruit, mole, mezcal, as well as photos, fashion magazines, cigars or folk art skeletons… and every ofrenda has pan de muerto and sugar skulls!”

There is no charge for this event.

Nov. 2: DÍA DE MUERTOS CELEBRATION Festivities at the Cultural Center will include face painting, kids crafts and activities, food and drink, and a performance by Huitzilopochtli Aztec Dancers. All events are free and will be held from 5 to 8 p.m., with the dancers performing at 5:30 p.m. in the Grand Ballroom.

LOOK UP NIKOLAI GOGOL and chances are, you’ll see him referred to first as a novelist. True, but he was also a dramatist, and the theater department at George Fox University this month will produce his best-known play, The Government Inspector, an 1836 satire on the greed and corruption of tsarist Russia. In the play, mistaken identity, chaos, and hilarity erupt in a Russian hamlet when the mayor and his cronies learn that an undercover government inspector is coming for a surprise visit. 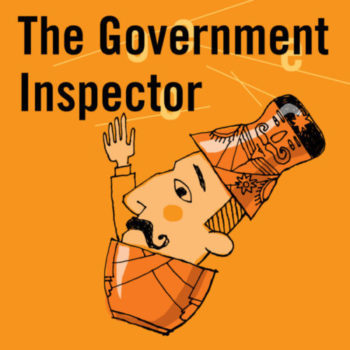 “One-hundred and eighty-two years later, this hilarious comedy about government corruption still rings true today for governments around the world,” theater professor Rhett Luedtke, who directs the play, wrote in a release. “Gogol’s play about a quirky little Russian village asks us to examine what happens to our politics, our policies and our ability to govern ourselves when those in leadership positions are influenced more by the love of power, money and prestige than by the desire to serve the common citizen. Similarly, it asks us to consider what happens to our faith in government when facts become politically inconvenient and misinformation and distortion become synonyms for truth.”

The play runs Thursday through Saturday, Oct. 18-20, and again Thursday through Sunday, Oct. 25-28, in the George Fox University Wood-Mar Auditorium. All shows begin at 7:30 p.m. with the exception of a matinee at 2 p.m. Oct. 28. Tickets are $12 for general admission, $8 for seniors and George Fox alumni, and $6 for students and children under 12 and can be purchased online or at the box office.

SPEAKING OF RUSSIANS, THE HERMITAGE PIANO TRIO is coming to Linfield College with a concert that embodies the group’s own Russian heritage while including repertoire works from European and American composers. The concert is 7 p.m. Wednesday, Oct. 17, in the Richard and Lucille Ice Auditorium in Melrose Hall on the McMinnville campus.

The event is part the Linfield Lively Arts music series. General admission is $10 at the door, and the event is free for K-12 and Linfield students. For more information, call 503-883-2275 or go here.

FOR THOSE OF YOU IN OR NEAR Salem who are not enjoying the Hermitage Piano Trio on Wednesday night, check out the Elsinore’s Wednesday Night Film Series. They’re showing Fritz Lang’s 1927 expressionistic sci-fi classic Metropolis, accompanied by Rick Park on the Mighty Wurlitzer Organ. There are many different cuts of this pioneering film, depending on the year and where it was released, but cinema purists may rejoice: This is the original 153-minute cut. Doors open at 6:15 p.m., the show starts at 7 p.m. Tickets are $6.