The insert for the King Louie Organ Trio’s new CD, “It’s About Time,” looks like a photo album of friends and family.

Fittingly so. Friends, mentors and family inspired Northwest blues stalwart Louis Pain’s album, as it says on the cover, and they’re name-checked in songs such as “Frances J,” which opens the album and honors his late mother, the feminist poet Frances Jaffer, who was also Pain’s first and biggest booster, signing him up for organ lessons when he was 16.

It continues with “Brulie,” the childhood nickname for former Tower of Power guitarist and longtime friend Bruce Conte, whose wonderfully economical and to-the-point guitar style adorns six tracks. (Conte recorded his parts over the tracks in a studio in the Philippines with an engineer he works with there, and the tracks were e-mailed back to Jim Hage, the CD’s co-producer as well as engineer, at Portland’s Long Play Recording. They are among the very few overdubs on this aggressively analog recording, which was recorded live and direct to analog tape in Hage’s studio.)

Pain’s wife, Tracy Pain, is the inspiration for “Island Girl,” of which Pain says with a straight face, “If you think you recognize the melody, you’re mistaken” – after which the song opens with a brief but direct quote from the “Hawaii Five-0” theme. There are songs for grown kids and grandkids, such as the gorgeous, churchy “Bry-Yen: I Believe in You” and “Lupus Tylericus.” “Big Brothers” is exactly that, about Pain’s brothers; and “Blues for Pierre” is inspired by his stepbrother, Peter.

There’s even a song for “Marty Boy,” the Pains’s friendly seven-toed silver tabby, whom they call their miracle cat after he was run over and found near death with a broken pelvis, yet recovered to walk, jump and purr again … and occasionally wreak havoc on the bookshelves of Chez Pain, which are chocablock with all manner of feline tchotchkes. “I just thought of the way he walks now when I was writing the song,” said Pain about the tune’s funky sashay.

Pain has deep blues roots, but at his core, he’s an organ nerd who loves gospel, jazz, funk and the Hammond B-3 masters such as Chester Thompson, Jimmy McGriff (which is why there’s a tune on the CD called “Chester McGriff”)  Richard “Groove” Holmes and all the rest who’ve mastered the mighty Hammond organ.

The CD has two release parties coming up: April 8 at Lake Theatre & Cafe in Lake Oswego, and April 10 at the Jack London Revue in downtown Portland. The recording is a landmark in Pain’s long career, which includes a decade in the Paul deLay Band and work with artists such as the No deLay Band, Linda Hornbuckle, Sweet Baby James, LaRhonda Steele, and the Mel Brown B-3 Organ Group, to name just a few. “It’s About Time” is his first collection of original songs – a baker’s dozen of concise instrumentals, most of ’em written by Pain.

“I started writing all these instrumentals,” Pain said as we talked in his poster-bedecked practice space at his home in Washougal, Wash. “Next thing I knew, I had 11 of them.” He credits a YouTube video of a Seattle organ trio with inspiring him: “I liked the group a lot, including the simple, catchy originals that they jam on, and thought, ‘I could do that!’ – I had written a few instrumentals over the years, but mainly swinging blues heads. Most of the new tunes were built on funky, danceable grooves.” 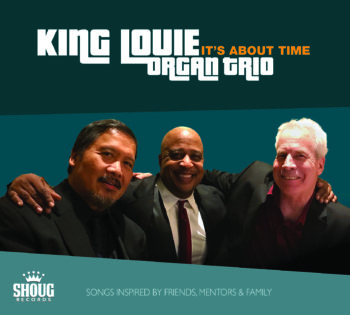 The CD includes a song each from the other band members – “Two Leons in New Orleans” from drummer Edwin Coleman III, and “Blues for Merle” by saxman Renato Caranto (who, as a mark of his versatility and virtuosity, has toured with musicians ranging from Esmerelda Spalding to Merle Haggard, for whom his tune is named). When it was all done, they had enough for essentially two albums: The trio and Conte recorded the first eight tunes, then Pain enlisted former Motown staff drummer Mel Brown and the impeccably bluesy, jazzy guitarist Dan Faehnle to join him and Caranto for the final five.

“I definitely wanted Edwin’s and Renato’s songs on the CD,” Pain said. “Our trio is not an organ player and a couple of sidemen. Nothing could be further from the truth. Renato and Edwin are both unbelievably creative and exciting musicians. The group is very spontaneous; most of our ‘arrangements’ are improvised on the spot. We are continually bouncing ideas off each other – and laughing at how the songs morph in unexpected directions each time we play them. In every respect, we are a band.”

The CD’s relative length ensures an admirable brevity on the individual songs: Solos are concise and pertinent, and the music bubbles along with no dawdling, no filler. The longest, “Lupus Tylericus” (named in honor of Pain’s wolf-loving grandson Tyler and Caranto’s high-register, dog-whistle-range tenor solo), is just a tad over seven minutes long.

“Short songs actually suit me,” says Pain, who also plays foot-pedal bass on all songs. “Live, we sometimes stretch a bit, but I have a short attention span, so long solos and reprising the song after the solos seem boring to me, and probably to the audience as well – I’m like, ‘Hey, we have plenty of songs: let’s move along to the next one.’ ”

The CD was made possible in part thanks to some serious serendipity, not least of which was a great deal by Hage for recording time at his new studio. “Thirteen songs is a lot,” Pain said, “but I thought, ‘let’s record them all because we don’t know when we’re going to get the chance to do this again.”

He didn’t know how right he was. In late March he started feeling some serious heartburn and queasiness mid-song at a King Louie and LaRhonda Steele gig at a Pearl District restaurant. Tracy Pain persuaded him to go to the hospital and drove him to Peace Health in Vancouver, where he was diagnosed with a complete blockage of one coronary artery– the one doctors call the widowmaker, which hints at its lethality. Doctors placed a couple of stents and kept him for 72 hours, after which Pain went home looking little the worse for wear, though while we were talking he did ask for my help in rolling a dolly-mounted Hammond B-3 organ – about a quarter-ton of oak, walnut, vacuum tubes, and electronics – flush against the wall of his practice room.

He’s obviously thinking about a future when schlepping a vintage Hammond organ is a no-go. He’s already playing a Swedish-made electronic Hammond clone, a Nord C2D, which he says is virtually indistinguishable from the tone-wheels-and-drawbars sound of a real B-3. Better yet, it weighs 34 pounds instead of several hundred.

But the pedal board for his bass parts is more resistant to easy portabilty, as is his Leslie speaker cabinet, which is a walnut cube about the size of a heat pump. Its rotating speakers accelerate and slow on command to create a rich tremolo, a dense, dimensional wash of phase shifts and Doppler effects that combine with a Hammond to create a match made in heaven, Pain says. Trouble is, that staunchly analog assemblage has proven stubbornly resistant to digitization.

He’ll figure it out. Pain is too much of a musician to quit. After all, when he started feeling queasy and flushed at that gig in late March, when he suspected he might in fact be having a heart attack, he points out with quiet pride: “I did finish the song.”