Here are two ways to know a poet:

One is to read the work, which in the case of José Angel Araguz, offers an astonishingly intimate window into his journals – not “poetry notebooks,” per se, but the Moleskines where he writes his personal diary by hand. Here, one gets a sense of his concerns and perspectives, his feel for language, etc. After completing a volume, he’ll put it aside, and only a year or two later when he returns does the poetry start to take shape.

The other is to meet for coffee.

I did both. As I drained an Americano at Starbucks, Araguz apologized a couple of times for the “tangential” nature of his thoughts, which over the course of an hour twisted and turned through anecdotes, opinions, and recollections. Interviews like this can be tough, though this one soon morphs into the kind that isn’t – an absorbing conversation with a clear takeaway, which is this: This gentle-spoken, 36-year-old first-generation American from Corpus Christi, Texas, is as passionate an advocate for poetry as you’re likely to meet.

Araguz was among those up for an award Monday at the Oregon Book Awards, held in the Gerding Theater at the Armory in Portland. His collection Until We Are Level Again, published in 2018 by Mongrel Empire Press, was nominated for the Stafford/Hall Award for Poetry by Oregon Literary Arts. Like much of his work, it’s a memoirish collection inspired by the years he spent growing up poor, and particularly, by a father who died in prison when Araguz was only seven.

He didn’t win (the prize went to Matthew Minicucci of Portland for Small Gods) but Araguz went to the ceremony armed with a speech intended to impress upon the audience the importance of advocating for other writers. It’s a lesson he learned in graduate school, where there were not many students of color, and he didn’t always feel he was being supported.

“Creative writing is primarily a very white field; it’s been in that space for a long time, from the shadow of the Iowa Workshop to the writers who get the contracts, and that has an influence,” he told me. He’s thinking of a particular poem, the topic of which was bilingualism. He cites the experience from 2006 not as a lamentation, but to offer context for what he believes is a much healthier environment today.

“I showed the poem at a workshop, and the workshop shuts it down, so I set it aside,” he said. “They were like, ‘That’s not poetry.’ I bring that same poem out in 2015 and I sent it out, and the first place I send it to they accept it. They give it an editor’s prize, and I’m like: What changed? What’s different?” 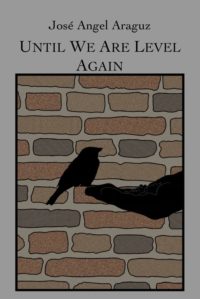 “I think it’s a good time for poetry,” he told me in an email we met. I’m grateful to have seen in my twenty years of pursuing a career in poetry a move towards equity and access for writers from marginalized communities.” He ticks off advocacy work by groups such as Cave Canem, CantoMundo, Kundiman, Lambda Literary, VONA, and VIDA, as well as journals like The Deaf Poets Society, Cotton Xenomorph, The Acentos Review, and Glass. The literary world, he believes, is becoming more dynamic and encouraging place.

“I can’t stress enough how important this shift is,” Araguz said. “Without a platform for one’s work, without representation and visibility of one’s culture and identity, and without a feeling that there is a space for you somewhere in the world, writers can be sent down a discouraging path, questioning the worth not only of one’s words but of one’s existence. Things aren’t perfect, but good work is being done, and good work is being honored.”

Araguz is an assistant professor of English/creative writing at Linfield College in McMinnville, where he’s been two years, though he’ll soon be leaving. He terms it a “bittersweet” life change. Later this year he’ll join the faculty at Suffolk University in Boston, where he’ll also take over as editor-in-chief of Salamander Magazine, the institution’s biannual literary magazine.

Araguz grew up in what he terms “the projects” in Texas. Spanish was his first language. Originally from Matamoros, Mexico, and raised by a single mother and an aunt, Araguz learned English in school, where he first stumbled into poetry in the second grade. “That stuck in my head for months,” he recalled. “I was writing haiku about Ninja Turtles and vampires and all the things I was interested in at the time.” In high school he started taking it more seriously, and went on to study at the College of Santa Fe and then grad school at New York University. After a short time in Eugene, where he and his first wife divorced, Araguz earned his doctorate in creative writing and comparative literature from the University of Cincinnati.

Until We Are Level Again is Araguz’s third book-length collection of poetry, and like the other two (along with several chapbooks) it delves into deeply personal territory: the imprisonment and eventual death of his father behind bars.

The collection opens with a poignant piece titled Gloves:

I made up a story for myself once,

that each glove I lost

was sent to my father in prison;

that’s all it would take for him

to chart my growth without pictures

without words or visits,

only colors and design,

texture; it was ok then

for skin to chafe and ash,

trying on a glove,

Araguz’s father, as does the rest of his childhood and family, emerges elsewhere in his work, including his first volume, Everything We Think We Hear (Floricanto Press), which comprises prose poetry, including this three-line gem, Semblance:

My aunt says she is glad I have my mother’s eyes because it would have killed her to have to run away from a man only to look down and see herself caught in the light of those eyes again.

We could keep going, but you get the idea: Araguz is not afraid to Go There. One collection that needs no explanation is titled The Divorce Suite, and he’s working on a creative nonfiction project about an “inappropriate” relationship with a teacher, one he expects will have classmates scurrying back to their yearbooks to figure out who it was.

I asked him what that’s like, opening one’s self up so completely in poetry.

“Delving into this raw material has just felt inevitable,” he said. “The metaphor of asbestos gloves comes to mind. Some poets have them, and are able to handle the hazardous materials of life. It isn’t the only way to write poems, nor is it the only way that I write poems. But part of my journey has been going to places and subjects that are, in the end, undeniable.”

Going there, of course, invariably brings into one’s orbit others who have made similar journeys. He recalls a reading in Forest Grove, where he explained how the circumstances of his father’s absence from his life “became something to reckon with akin to a blank page.”

“I had a woman come and share how that idea resonated with her and the loss of her father early in her life,” he said. “So, suddenly there’s representation and visibility in play. If talking about my pain allows others to face theirs, then there’s something more at stake about going to that place, and that braces me.”

Araguz calls himself an introvert (as many poets do) but he clearly has no problem getting out and talking to people. In the short time he’s been in Oregon he’s given readings all over and presided over workshops. He blogs. But he doesn’t regard the never-ending publicity tour as an exercise in self-promotion. He is always reading and citing poetry by other writers – not only his students, but even new “Insta-poets” online, who use Instagram as a platform. He’s also interested in Blackout poetry, in which poets repurpose old texts or newspapers to create a poem.

“The Instagram thing is fascinating to me,” he says. “Because it has been outside the academic and traditional poetry world, and it gets a bad rap. When I was younger, when I was starting out, the thing that the people in my classes didn’t want to hear was slam poetry. The thing that’s ‘not poetry’ now is Instagram poetry.” His students ask him about it, whether it’s “real” poetry, and he turns it back to them by affirming that it is poetry and then asking: “Why do you ask that question?”

He smiles, acknowledging the obvious fact of that much of the poetry one finds online is awful. But he refuses to dismiss it all out of hand. “Obviously these are not poems in a literary journal,” he said. “It gets a bad rap, but I look at some of these accounts, and they’ve got like 60,000 followers. I can’t tell you that I have that many readers. So they’re doing something right.”

It was, in part, the negative aspect of being “shut down” in his grad school workshops that has instilled in Araguz the importance of supporting others; creating safe spaces for conversation.

“As an introvert, I worried that not being social meant I would have no community,” he said. “But reading each other builds community. Sharing and reviewing each other’s work, even just sending a quick email that says ‘Hey, just read your book, it’s dope!,’ that builds community.” He calls it being “a good poet citizen.”

“This mantra was born in the face of competition and selfishness, things that can kill and/or scare off the creative spirit. For me, the mission is clear: I’m here due to an undeniable love of the word and of where poetry can take us.”

IN THE BETTER PART OF A YEAR that I’ve reported on arts and culture from Yamhill County there have been a number of inaugural events, large and small. Another is on the horizon: The McMinnville Recycled Arts Festival will launch its first show this weekend inside the Linfield College Nicholson Library in McMinnville, 10 a.m.-4 p.m. Friday and Saturday April 26-27. Hosted by Zero Waste McMinnville and Linfield’s Sustainability Office, it’s a juried show that requires at least 65 percent of the materials to “come from what most people would consider trash,” according to organizers. Items created by 30-40 artists will be for sale and include clothing, jewelry, yard and lawn art, and indoor décor. Also, local Montessori and Mac High School students will have Earth Day-themed art on display in the Small Art Gallery that is adjacent to the library next to the parking lot. Impossible to miss, really. See the Facebook page linked above for more information. 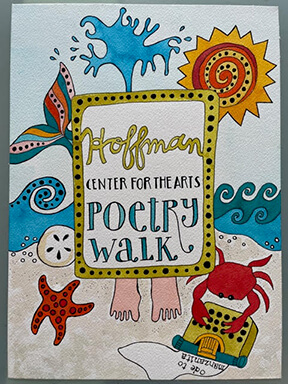