The new executive director of the Oregon Coast Council for the Arts is excited by his new job and his new home.

Jason Holland doesn’t expect to have much trouble adapting to life on the Oregon Coast. For one thing, the new executive director of the Oregon Coast Council for the Arts already is smitten with the place, and two, having relocated as a child with his family multiple times, he knows moving. Florida, California, Kansas, Asia — he’s called them all home. You might assume his was a military family. Not even close. Holland lived what many kids would consider the dream. His parents worked for Disney.

“It was a pretty magical way to grow up — going to the parks all the time, seeing all the shows, plus living in Tokyo for a number of years was an incredible experience at a young age. It opened my eyes to so many cultures,” he said, noting that he attended an international school.

That, it turns out was post-Disney, when his dad took a job with AMC Theatres.

“At first, I thought it was the worst thing that could happen to me — not knowing what to really expect in Kansas,” said Holland.  “And it was by far the best thing that happened to me.  School in a small town was great; there weren’t the usual cliques I saw in California.  It was ‘popular’ to be involved in the school — in student leadership, National Honor Society, band, the arts … anything.  It didn’t matter at my high school, which was such a surprise and totally foreign to me as an arts kid — band and theater.  The friends I made there are among my closest friends to this day. They were the first ones I called to share that we were moving to Oregon.”

Holland, 46, and his partner moved here from Costa Mesa, Calif., in late March with their two rescue pups. At the arts council, he replaces Catherine Rickbone, who retired in 2020 after 13 years in the job. The search for a new director attracted more than 30 applications from all over the country, including New York, California, Texas, Utah, and New Mexico.

Holland had been in Costa Mesa for 18 years with the Segerstrom Center for the Arts, where he was most recently VP for community engagement. His focus was helping arts organizations root themselves in the community. In his new role, he said, he wants to find out “what does the community need as we rebuild? That’s what I’m interested in learning first before sending us off in some direction,” he said. “Learning and responding.”

In California, “I was so fortunate to work directly with community groups and young people, and those experiences are galvanizing,” Holland said. “Working with and building programs for at-risk teens, some participating for the first time, and just seeing the transformation that can happen when a safe space is created. It can be life-changing. It doesn’t mean they have to go into the arts, but their minds have been opened up. I realized that’s what happens when you push beyond fear and resistance. It’s incredible to watch.”

Coming on board in the midst of COVID is probably not the ideal introduction to the arts council, which manages the Newport Performing Arts Center (largely dark the past year) and the Visual Arts Center. It’s a challenge he plans to meet by first figuring out when and how to get back to something resembling normalcy with both city-owned venues while keeping artists and audiences safe.

That also means getting to know the community, meeting as many people as possible, and thinking about what art organizations might look like in 2021 and beyond.

“It’s clear to me you have great support for the arts in this community,” he said. “So many people I’ve met have shared their own love of the arts and their children. For arts organizations to thrive, they have to have relevance in the community. I can tell this organization has been stewarded over the years. That makes it exciting to come into.”

When he’s not contemplating how to steer the arts council into the future, he’s soaking up this spectacular place we call home.

“The natural beauty of this region is everything I expected it to be,” he said. “The first time I saw the coastline here took my breath away. It’s just so dramatic. It exceeded my expectations.”

Holland got his first real look on the drive from the Portland airport, where, traveling Oregon 99 and 18, he said he was amazed that in just one trip, he passed wineries, sheep farms, forest, and finally, rocky coastline. “I was just like, ‘Wow, that was all in one drive.’”

The next time he traveled north, he came by car, taking Oregon 38 along the Umpqua River.

“I just kept telling myself, ‘Put your phone down, it’s not safe to take pictures,’” he recalled. “I couldn’t help it, it was so beautiful. It’s so different from California; oh my god, it’s so much more verdant and green. I can’t wait to get out more and explore nature. It’s so beautiful.” 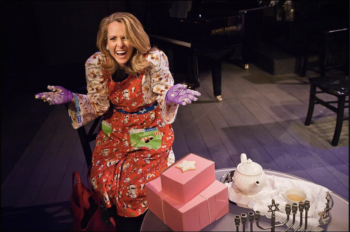 Quiet in the chaos: Mel Prest at the Schneider Museum of Art