I remember scrolling mindlessly through Facebook about a year ago when I first came across Lil Buck. Flying past a fair share of one-minute recipe videos, the latest pictures of those people I used to know, and my daily dose of Facebook politics, Lil Buck popped up, swirling around my screen to a piano ballad. The short video finished. Wait. What? Rewind. Retwatch.

Lil Buck has that effect…he makes you stop in your tracks and look closer, questioning if what you’re seeing is possible. There’s just something about the way he floats through space with his limbs unfolding like calligraphy on a crisp white page that leaves you entranced. After maybe 30 seconds of watching him dance, I was heading down the cyber-world rabbit hole sifting through videos and reading interviews. That same virtual trail led me to find his partner in dance, Jon Boogz, and I proceeded to follow the pair for the past year, completely mesmerized by their capability to capture the essence of life, hardship and unwavering hope through their artistry in movement. 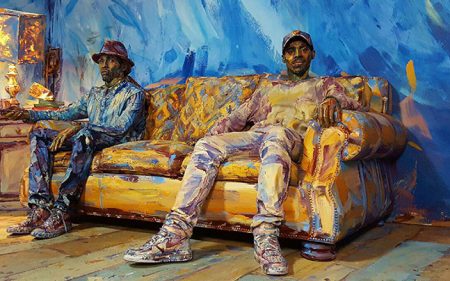 In a stunning performance this past Friday at the Newmark Theatre, Buck and Boogz presented their work Love Heals All Wounds. Following suit to their theme of social justice works, the show began with a cold, hard look at where we are at today in America. Last year, the duo created a dance film entitled The Color of Reality, in which they paired with body paint artist Alexa Meade to address gun violence and police brutality in our country (if you haven’t seen it yet, watch it HERE). The chilling subject reappears in Love Heals All Wounds, in which Boogz and Buck demonstrated a hauntingly beautiful dedication to the victims of racial injustice. They’ve got a knack for entwining life and art, making it clear that there lies no distinction from one to the next.

The evening was a game of catch between the dancers and an incredibly talented spoken-word poet, Robin Sanders. Sanders’ presence in the room was as captivating as her poetry, effortlessly reciting line after line with confidence and dignity. Every once in a while, Sanders would let her words slip into her body—her movements as fluid and powerful as the way she spun language as silk: “We live behind these invisible partitions, as real as our existence. /You can never build a wall so tall it protects you from yourself.” And the verses served an important function in the show, foreshadowing the next section of the work.

A long spotlight fell down the center of the stage, and the dancers picked up right where Sanders left off. They moved with urgency, yet allowed every muscle to fully articulate, filling the space they occupied entirely before gliding across the floor and into another idea. The radiant beam quickly became the suggested wall that has played with everyone’s sense of security and vulnerability for years now. It seemed ironically fitting that the “wall” was an illuminated empty space, full of faith in humanity’s ability to overcome that which has covered our country in a dark veil. As the music (and the audience’s emotions) reached a pinnacle, the dancers broke through the invisible divide and the crowd erupted into victorious cheers, communally agreeing that we are stronger as a unified people.

It was almost a tease, to envision a life where dismantling years of prejudice and violence could be as simple as a well-choreographed work that breaks down racial barriers on the eight count. Yet Boogz and Buck are confident that art is the gateway to social change. Together, they founded an organization called Movement Art Is, a group dedicated to using dance as a means to inspire action in addition to advancing the artform.

Sanders’ spoken-word wafted in and out throughout the show, taking on as many guises as the wind… sometimes loud and striking, sometimes cold and harsh; but she always wove hope into her words of despair, like a warm, gentle breeze. Love Heals All Wounds shifted tone when she emerged from side stage, speaking as Mother Earth: “The purity and simplicity of how it used to be. Do you remember me?”

Delivering a few verses for each of the four ancient elements, Sanders and the dancers tossed images and thoughts back and forth. As an avid lover of grounded modern dance, I’d never viewed street styles as inherently elemental, yet Buck, Boogz and their troupe had no trouble using the Memphis jookin style to convey fire, earth, water and air so harmoniously you’d think jookin was a movement vocabulary learned from the natural elements. Jookin, also known as gangsta walking, originated in the ‘90s in Memphis, Tennessee, and is typically danced to crunk music. Lil Buck and Jon Boogz have reinvented the style, pairing it with classical music and piano ballads.

This isn’t the only cross-disciplinary action they’ve been a part of either. As Lil Buck describes in his collaboration video with NOWNESS at Foundation Louis Vuitton in Paris, he studied under scholarship at New Ballet Ensemble in Memphis around the age of 16, taking ballet classes in exchange to teach hip hop. Boogz has choreographed for prominent icons such as Mikhail Baryshnikov as well as Gloria Estefan. To put it simply, Boogz and Buck are actively paving way for a world where synchronicity between art forms and different cultures are not only wildly inspiring, but feasible.

The program ended on a completely celebratory note, as the audience jumped to their feet in standing ovation as the group took their final bows. Sanders chimed in one last time, impressing that peace and hope are not merely figments of our dreams… that while “power is the new narcotic,” love heals all wounds.