Living in a world of upside down

ArtsWatch Weekly: The pandemic is the puzzle. Adaptability is the key. Unlocking the cultural world's future.

SUDDENLY EVERYTHING’S TOPSY TURVY, and it’s seeming more and more like a mistake to think that things are going to get back to “normal” even after the health threat has ended, whenever that might happen. In the cultural world, the economic effect of the coronavirus shutdown is going to be hard on everyone and catastrophic for some. And by “everyone” I mean not just arts groups themselves but also the artists and staffers who’ve made their livings working for them, and the funders who keep them going, and the audiences who may understandably be reluctant to flock back to theaters and concert halls and museums as if social distancing were just some crazy blip that’s done and gone. Some groups, even if they do everything “right,” aren’t going to survive.

Barry Johnson, ArtsWatch’s executive editor, has started writing a column he calls “Starting Over,” which is about exactly those issues. How do we start over? How do we reinvent? What do we return to, and what do we move beyond? In his most recent “Starting Over,” Masks and democracy, he talks about some of the political failures that have made things worse in the United States than they needed to be, and reports on his conversation with the veteran arts consultant George Thorn, who suggests that the sort of creative, step-by-step problem-solving artists engage in every day might be a model for the society as a whole. In an earlier column, Point to point, Johnson talked with Portland Center Stage at the Armory’s Cynthia Fuhrman about practical adaptability. 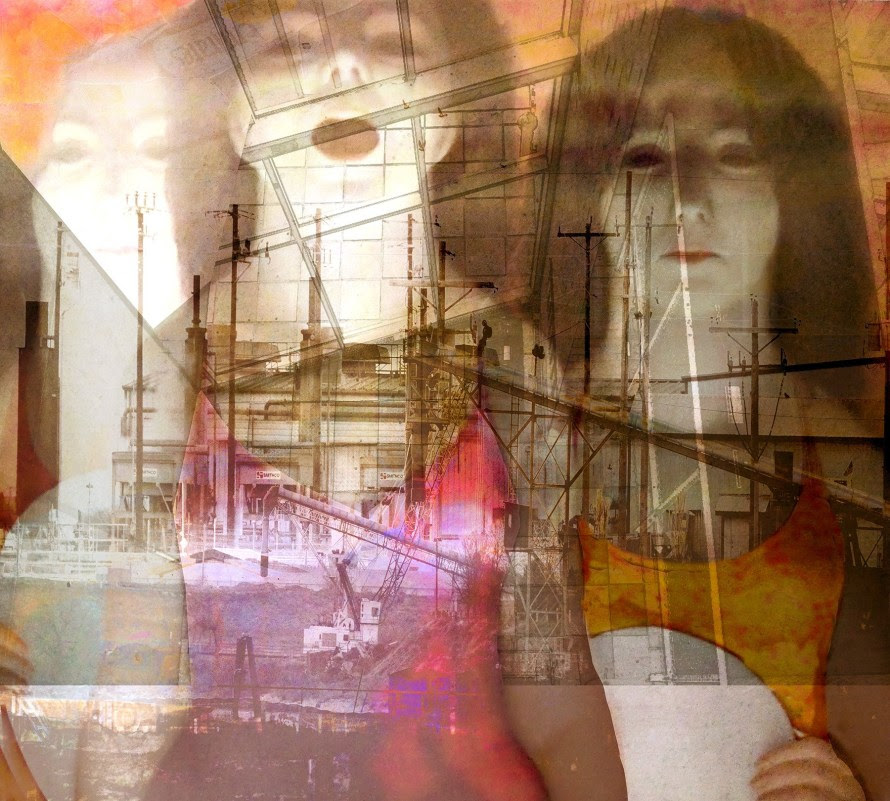 Friderike Heuer, “The Strikers,” montage, from her series “Fluchtgedanken,” 2020. In her visual essay “Fluchtgedanken: Thoughts of Escape,” Heuer writes about manipulating images of paintings by the mid-20th century painter George Tooker, and how her adaptation of his work is a response to such disturbing issues of the Covid-19 crisis as the return of eugenics to public discussion and practice: “Took us what, only 75 years to get around to it again? What are expendable lives? The old? The diseased? The incarcerated? The poor?”

ADAPTABILITY IS GOING TO BE CRUCIAL, and in a lot of cases, also not sufficient. Because the situation will be different for everyone, which means that while there may be smart overall strategies, they’ll have to be adapted to specific situations. And the ground keeps shifting.

I mean, think about it. Everything’s upside down. Yesterday a headline from The Guardian popped up on my news feed. It said: “Swedish city to dump tonne of chicken manure in park to deter visitors.” I didn’t bother to read the story. The headline was enough. Can you imagine such a story two or three months ago? And today we understand immediately what the issues are, and why this happened. We still have a sense of the absurdity of it all, but we also understand that the absurd has become the normal. And to address the normal, we have to address the absurd, and sometimes even DO what just a little while ago would have been outrageously absurd. What: Bring world trade and business to a halt? Hole up at home for weeks on end? Go out on the streets cloaked in masks, like Jesse James setting off to rob a train, except that no one’s on the trains? It’s absurd. And it all makes sense. And that’s what we have to adapt to.

Adaptability wears many faces. Oregon’s arts and cultural scenes are incredibly diverse. They range from traditional classical concerts and theater and ballet and museum shows to community theater, quilt shows, video and animation, hip-hop centers, contemporary and traditional Indigenous art, community celebrations like sidewalk chalk festivals, market festivals, jazz and blues festivals (all three covered vividly for ArtsWatch by photographer Joe Cantrell), book celebrations, and big group projects like Exquisite Gorge, Maryhill Museum’s collaborative 66-foot-long print of the people and land along a vast stretch of the Columbia River, which Friderike Heuer reported for us in an 11-part series of words and photographs.

One of the biggest advances in the Oregon arts world, and one that ArtsWatch and others have been doing our best to track, is the broadening of that focus. How is our culture changing? Where are beautiful and important things happening that aren’t usually seen or paid attention to by large audiences? We want to give voice to groups and people who have a hard time making their stories heard. Sankar Raman’s “The Immigrant Story” is one great place to find stories like this; so is the impending Vanport Mosaic Festival, which this year (speaking of adapting) will be entirely virtual and will happen May 8-31. There are lots of others. We try to track the small as well as the big.

A lot of times people in the cultural world tend to see big and small as an us-versus-them thing. But really, they’re interlinked. An example: The Portland Art Museum has never been more open to the broad communities and cultures outside its doors than it was before the lockdown. It’s been rethinking its collections and how they’re presented, inviting in contemporary artists from all sorts of communities, engaging audiences in ways it never has before. All of that takes money, and it’s precisely those sorts of programs that could be most imperiled as the museum slowly recovers from the financial hit it’s taken. Another example: The Oregon Symphony, which some people dismiss as overly formal and stuck in the past, employs about 80 of the finest musicians in the state, and many of them are actively involved in the small-scale contemporary music groups that give the state’s music scene some of its most interesting and forward-thinking programming. Without those symphony paychecks, a lot of the little groups might not exist.

The times of Covid-19 are imperiling that balance. In A world of uncertainty, David Bates’s free-ranging interview with Oregon arts and education philanthropist (and major ArtsWatch supporter) Ronni Lacroute, Lacroute points out another facet of upside-down coronavirus reality: Small, lean groups might be the best-adapted to survive; big organizations that have high overhead and brick-and-mortar spaces to maintain could find themselves in deeper trouble. And in Oregon Arts News: Covid-19 udates, Barry Johnson rounds up a few small but significant reports from the battlefront: some good things, some bad things, some possible turning points. 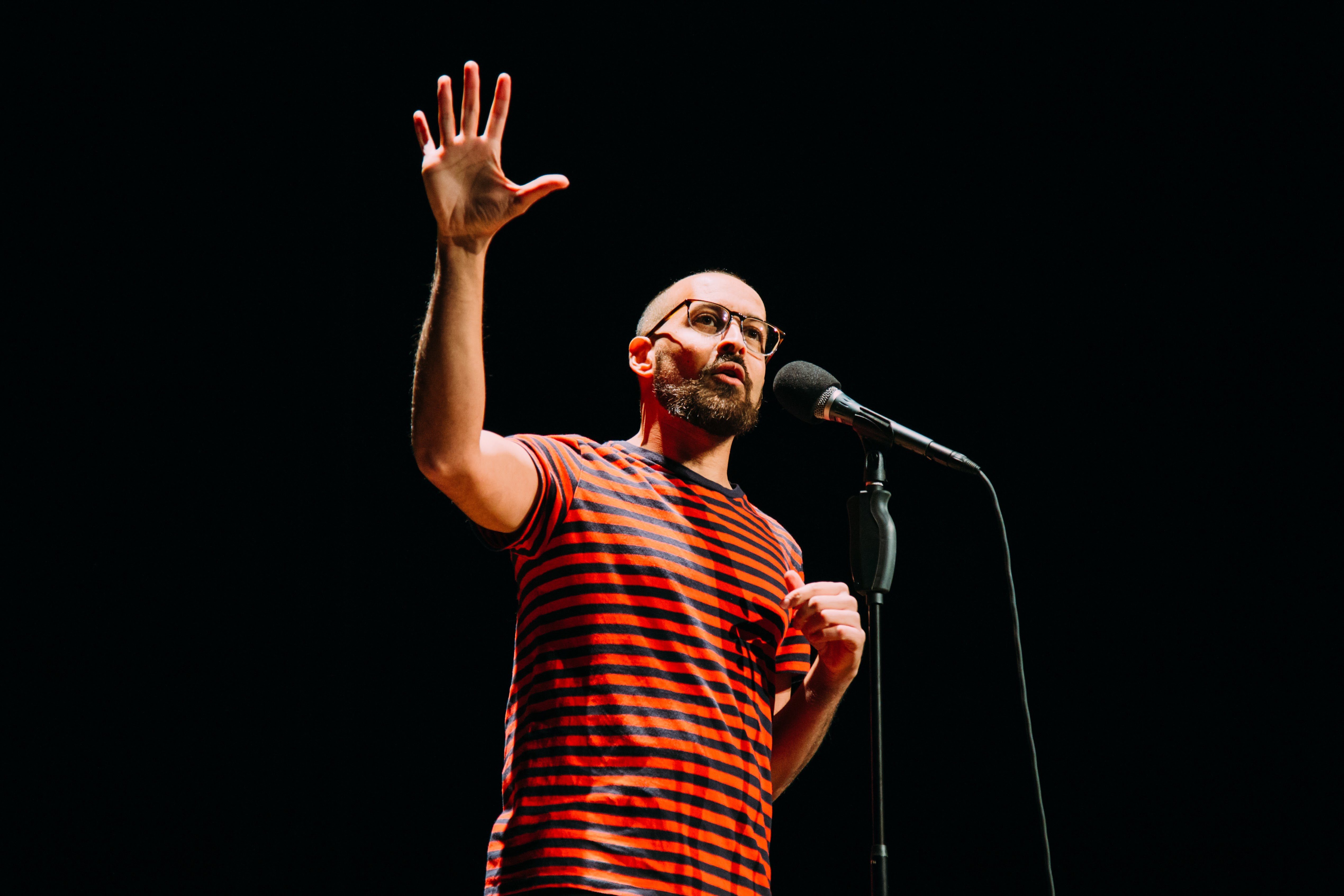 ADAPTABILITY IS ALSO A KEY ISSUE FOR ANIS MOJGANI, who this week was named Oregon’s 10th poet laureate, following Kim Stafford, who is just completing his two-year term. Mojgani is a new kind of poet laureate for Oregon, a widely known and followed slam poet who’s a two-time National Poetry Slam individual champion and a winner of the International World Cup Poetry Slam. In A poet laureate for new times, his expansive conversation with TJ Acena for ArtsWatch, Mojgani notes that the coronavirus lockdown creates significant challenges (especially for an oral poet) in carrying out the duties of the role. “One task of the Poet Laureate is to bring poetry to people and to engage in being a steward of poetry in communities,” he tells Acena. “What does that look like if you can’t travel to and be in those communities in person, at least for an unknown amount of time? So there’s an element of readjusting and re-exploring the creative possibilities in which to carry out this appointment.”

Life and death are with us at all times, of course, but in a time of pandemic they seem more urgent. The great Polish contemporary composer Krzysztof Penderecki, who had a long history with the Oregon Bach Festival, died a month ago at age 86, and in his ArtsWatch essay Tragedy and loss, Charles Rose gives us a heartfelt and revealing memorial to a man whose life’s work seems made for our times. “Since his 1960 breakout piece Threnody for the Victims of Hiroshima, he continued to write music meant for public grieving: the terrifying Dies Irae, the massive Polish Requiem and dozens of other works from the late 1950s until his death,” Rose writes.

And in his newest MusicWatch Weekly, La dérive symphonique, Matthew Neil Andrews makes the case that music lives on, through scores and recordings, the sort of ghost-life that keeps composers and performers with us after they’re gone. Andrews scans the musical horizon, finds news and virtual opportunities to share, and even leaves us with a song and message from Danny Elfman. “And remember,” Andrews declares: “we’re all in it together.”

MEANWHILE, IN THE REALITY KNOWN AS VIRTUAL … WHILE “REAL,” FLESH-AND-BLOOD PERFORMANCES ARE OFF THE BOARDS, all sorts of things are happening in cyberspace. Here are just a few of many with local interest:

CONTACT DANCE FILM FESTIVAL. BodyVox is taking its fifth dance-film festival into Streamingland, with three programs over four days showcasing collaborations among filmmakers (including BodyVox favorite Mitchell Rose), choreographers, and dancers from around the world. Today (April 30) through May 3.

DIMENSIONS OF THE SACRED: A COLLECTIVE ONLINE EVENT. Disjecta Contemporary Art Center has turned its latest show, which had been planned for real space, into an Instagram event running 6-8 p.m. Saturday, May 2. “Share a sacred object as a story and view others, together on Instagram.Tag us and hashtag the show, we will share them 6-8pm and archive them on our highlights!” #dimensionsofthesacred @disjectapdx

“But one thing is clear: The forces and situations that have shaped my life and those of everyone in the region are knitted to the land, to forces both in and out of our control. In the Pacific Northwest, the land is always the thing. No exertion of human will or industry will take away its precedence. The course of the population’s lives (is) inexorably linked to the whims of an untamable land.”

GIVE TODAY. KEEP THE STORIES COMING.

OREGON ARTSWATCH  WELCOMES YOUR HELP during the coronavirus crisis. A contribution goes a long way. Many of you are already ArtsWatch financial supporters. Thanks for that. If you can, this is a good time to bump up your contribution, or contribute for the first time. We’re here for you, and the artists, and the art.  Become a member. Make a donation.
Just press the “donate today” button below.