Milka Djordjevich’s ‘Anthem’: Are we making art, or is it making us?

By PAUL MAZIAR and JESSICA CERRATO

The dancers enter the theater with stately, measured grace, four women in bright costumes moving in procession, hands and bodies enjoined in a line moving in synchronous time. The dance begins en media res, with a minimalist score pulsing and ticking throughout the performance space—the audience wrapping the wooden dance floor in the tiered setting of an amphitheatre. The slow, deliberate manner of the dancers’ steps culminates with the repetitive opening music; it is dizzying, trance-like, unexpected. The sacred feminine is evoked in pressing gestures to the body: deliberate and rhythmic as music hums and intensifies the unfolding drama, each step and fluid movement leading into another while the dancers begin to interact—lightly slapping each other’s bodies and their own as if in a rite, clapping time.

The most immersive instances of art happen actually and involve you bodily—even if at first it seems all mental—bringing physical changes to your body and your mind. Think of the shivers you got the first time you experienced the device of dream-logic in a film, the uncanny in sculpted form, or the ineffable surprise of an abstract painting. The choreography of Milka Djordjevich’s Anthem is characterized by dream-logic and surprise, tempered by the absolute command that the dance requires, and propelled by a vivid score from Chris Peck. Executed by four dancers: Laurel Atwell, Jessica Cook, Dorothy Dubrule, and devika wickremesinghe, Anthem took place at PICA HQ during four consecutive evenings at PICA’s Time-Based Art Festival, a week-long forum for contemporary art that emphasizes the communal nature of performance, as well as its ephemerality.

The categories sacred and the profane are somewhat lost on us here and now. Anything goes, and in some ways, this is welcomed—but when dichotomies like these are represented and performed in art, they invoke the shared human story. Sacred works of art and theater were meant to be experienced rather than merely observed—evoking visionary, emotionally immersive experiences that may appear irrational, but are internally consistent, moving to their own inner logic. They are registered not just conceptually by the mind but experienced throughout the body, shared between audience and performers within the context of the ritual.

Watching the progression of dancers’ movements, there’s a spreading feeling of increasingly wild abandon; a bacchanalian release and tension. The dancers move together and apart, to a score that morphs from tonal and non-melodic, through a fusion of Moroccan traditional music and into the pop-inspired realm. The first act comes across not so much as stylistic, not as a merely choreographic trope, but as an ideological nod to the irrational as a means to overcome, for a time, the often oppressive rational demands of the everyday—particularly in our modern context, with its prescribed routines and well-known expectations. 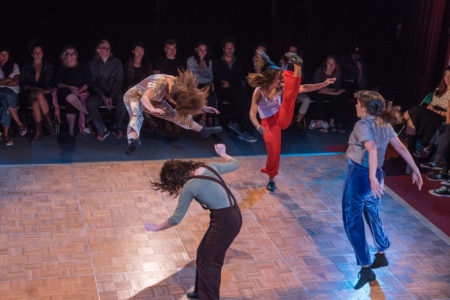 This is done via the perceptibly simple, common movements that are made totally foreign, unforeseen, jarring to the audience because of their slowness, deliberation, strange sequencing. Here, one feels all ages at once, in a dance that’s palpably freeing, each movement becoming looser, unscripted; and the spectators are freed, too, of wondering what’s happening to them. The surprising effect of this deliberate tension is that the stranger the dance becomes, the more relaxing it is to watch, and the more immersive it becomes.

The dancers raise their arms. The soundscape ripples across the space as the dance vitalizes the crowd. The audience begins to move; heads, hands and bodies called together by synergy. Repeatedly the dancers touch, spinning faster, bodies coiled and then freed. Mesmerizing, turbulent, the multidimensional score drives the dancers on as chaos builds across increasingly unbridled terrain. The performers link hands, toss back their heads, and let out piercing cries. This movement, too, on repeat, enchants, adding intervals of humor and free play.

Darkness and a spotlight. One dancer drops to her knees before another. Unbounded from time and formal choreography, they improvise, toss water into the air, twist, crawl, push and pull in a joyous frenzy. Their hold over the audience complete, they collapse to the floor in surrender.

There is a sense of stillness. Because the event is understood to transverse the space of the audience, the spectators understand themselves to be participants—we too experience the exhausted empathic capitulation to forces beyond the mundane.

Is the sense of Anthem’s abandon, the seeming rite that it performs, real? In The Bacchae (the classical Greek play by Euripides, in the ancient theater), performances like these were dedicated to the gods. Anthem seemed to be real, an invocation and a total abandon. From one perspective, it is by virtue of the dancers’ supreme preparedness and fluency, only then is the abandon actual. In this context, it’s important to consider that this is a show made specifically to affect its audience. It’s the ultimate artifice: their performance is itself a kind of mask—which can change the state of the wearer and heighten the drama—that seems to send the dancers into a kind of zone, only by way of the mock rite. It’s part real. But as in all art, the illusion is key. It’s the trompe l’oeil that makes us see sunlight on a haystack, and the illusion of depth within a flat sheet of canvas. But here, it’s because the form is so corporeal and ordered, honed, perfected, that the performance can transcend separation in creation of a shared human experience. 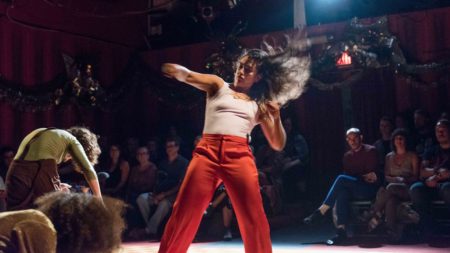 Four consecutive nights of this performance of this immersion seems nothing short of a feat, having seen what the dancers embody for the sake of art and its conveyance. The dance allays the limits and limitations of sense, by way of body movements which serve as points of entry into other realms. In its concluding movements, it becomes a return: the dancers circle back from the way they came; the door of the theater opens and they dance out of it. Something happens to the dancers as the performance goes on—they begin to change and seem to go somewhere, but where/how?

The dance is open-ended and in this it seems part of a larger mystery, or a whole cascade of mysteries. The legend of Orpheus tells that while Orpheus played his lyre on the mountainside, he found that a lion crouched at his feet to listen. After the music, where did the lion go, what became of it? The story doesn’t say.

Milka Djordjevich is a choreographer, performer and teacher based in Los Angeles. Her work has been shown at many venues, including the Kitchen, the Chocolate Factory Theater, the Whitney Museum, the American Realness Festival, and Danspace Project in New York; REDCAT, Grand Performances, Pieter, the Hammer Museum, Machine Project, Showbox LA/Bootleg Theater, and HomeLA in Los Angeles; Counterpulse and the Berkeley Art Museum in Northern California; and internationally in Austria, France, Germany, Italy, Macedonia, Poland, Serbia, and the UK. Djordjevich was a 2006-2007 Movement Research Artist-in-Residence and a 2008/2010 danceWEB Europe Scholar, and she is currently a 2017-2018 Princeton University Hodder Fellow. Her other projects include serving as guest editor for Movement Research’s Critical Correspondence, and initiating the Monday Morning Class series at Pieter. Djordjevich has co-authored works with composer Chris Peck, choreographer Dragana Bulut, designer Samuel Yang, and artist Marcos Lutyens; and has performed for Heather Kravas, Jennifer Monson, Elizabeth Ward, Sam Kim, Sasa Asentic and Ana Vujanovic, among others. She has twice served as Visiting Assistant Professor in the UC Riverside Dance Department and has taught at UC Irvine, AMDA, Pomona College, Movement Research and PICA’s TBA:15 Festival. In 2016, Djordjevich established STANA, an organization cultivating Los Angeles, national and international dance connections.