LaMotte and the conductorless Amadeus Chamber Orchestra will perform with CMNW in September.

The Pacific Northwest is home to many musicians who fly a bit under the sonic radar. One of those is Adam LaMotte, who has a stellar reputation for playing the Baroque violin as well as the modern violin.

But that’s not all. My interview with him touches on some of his many endeavors–including his work as founder and artistic director of the Amadeus Chamber Orchestra, which will perform with violinists Anna Lee and Soovin Kim in a concert presented by Chamber Music Northwest at The Reser Center for the Arts in Beaverton on Thursday, September 29. On the program: Bach’s Concerto in D minor for Two Violins, Tchaikovsky’s Serenade for Strings, and the “violin & string orchestra” version of Alistair Coleman’s Moonshot (read Angela Allen’s profile of Coleman here).

LaMotte is from Houston, Texas. He studied violin at the Manhattan School of Music and Queens College in New York City where he graduated with a Bachelors of Arts.

This interview has been condensed and edited for clarity and flow.

Oregon Arts Watch: When and why did you come to Portland?

Adam LaMotte: The summer after I graduated from Queens College, I drove across the U.S.–it was a nightmarish drive, but I won’t get into that. I made it to Portland in July of 1997. A friend of mine from high school had moved to Portland a few years earlier. He was a visual artist. I came out to visit him. I didn’t want to stay in New York and I didn’t want to go back to Houston. I had been to Lincoln City as part of the Cascade Music Festival with my teacher Ken Goldsmith back in 1990. I knew that Portland had an excellent music scene, and Monica Huggett–one of my early music heroes–was leading the Portland Baroque Orchestra.

OAW: How long have you played with the PBO?

AL: I’m in my twenty-second year with them. It’s been a wonderful experience!

OAW: You helm the Berwick Academy for the Oregon Bach Festival?

AL: Yes, I am the program director for the Berwick Academy. It’s a unique, post-grad academy for period instrumentalists. There is nothing like it in the states. This summer we had 30 students, nine faculty members, and a guest conductor for a couple of concerts. This year, I led the Academy orchestra from the first violin position. Monica played a Mozart concerto in one of the concerts.

OAW: And you are the artistic director of the Montana Baroque Music Festival?

AL: That’s right. Monica handed the position to me after its 3rd year. It takes place near Paradise, Montana at Quinn’s Hot Springs Resort. It’s informal and casual and a lot of fun. Matthias Maute, the recorder virtuoso, often participates.

OAW: When did you start the Amadeus Chamber Orchestra?

AL: I started it in 2018. I’ve always wanted to have a conductorless chamber orchestra. I like to think of it as the most efficient orchestra possible. The Amadeus Chamber Orchestra consists of players from many of the local professional ensembles in the Portland-metro area.

A chamber orchestra of a smaller size is very flexible in that you can expand and contract as needed. If you play in the right venues like the Lincoln Recital Hall at PSU which has beautiful acoustic, then you have the capability of making 12 or 13 strings sound like 25 or 30 strings. With that in mind I have arranged some movements of string quartets and other pieces for string orchestra – with bass added and all that – audiences have been perfectly satisfied without having the large orchestra. We can get a sound that is riveting and exciting.

We have had as many as 22 players on stage and as few as eleven. Most importantly, we give young musicians from PYP or MYS the experience of playing alongside professionals with no conductor, something they’re always really excited to be a part of.

OAW: What is on tap for your concert with Anna Lee?

AL: We will play Alistair Coleman’s Moonshot for Violin and String Orchestra, which he completed in 2019. It’s an ethereal and otherworldly musical depiction of the 1969 moon expedition. We will also perform Bach’s Concerto for Two Violins in D Minor, which will feature Lee and Soovin Kim, who is co-artistic director of Chamber Music Northwest. Another terrific piece on the program is Tchaikovsky’s Serenade for Strings. So the music extends from the Baroque period into the present day.

OAW: It looks like you will try your hand at comedy as well?

AL: That’s right! Amadeus is doing a Classical Comedy Hour at The Reser on Thursday, October 13. There will be classically-themed skits, and a bunch of other hilarious acts. It’s Saturday Night Live meets Victor Borge! You will see that some local musicians are very funny! There’s a lot of material out there! I can’t wait to do some comedy. It will be a bit of theater about music.

OAW: What else is scheduled for the ACO?

OAW: For your chamber orchestra, you are doing some arranging?

AL: Yes, I use a dumbed-down version of Finale, a computer program for composing. It does everything I need. I’m not doing the fancy stuff. My issues like transposing for horns has always come into question. When we did the scherzo from the Brahms F minor piano quintet, I always thought that it screamed for horns; so I arranged a version for horns and strings, and it’s pretty awesome.

OAW: I recall reading an article in The Oregonian about a violin that you purchased with the help of friends.

AL: Right. I raised enough money from supporters and family to essentially co-own an amazing 18th-c Italian violin for a decade. Then I sold it to a colleague in Houston, and everyone made a little money, and helped a starving artist have a taste of the good stuff!

OAW: So what instrument are you playing now?

AL: I have a wonderful violin made by Sergio Peresson. It was given to me by my teacher, Ken Goldsmith, after he passed away in 2020. It was originally made for Franco Gulli, who taught at Indiana University’s Jacobs School of Music for many years.

For baroque playing, I use one of mine that I re-carved and varnished. I started an instrument building business seven years ago. I have the instruments made to my specification, and I finish them and “play them in.” They are just bare wood. I take them apart and down to the lighter Baroque specification, then I seal them and varnish them.

This involves a lot of experimenting. I’ve talked with violin makers and that’s what they say too. I didn’t realize that varnishing instruments was so complicated. It’s very finicky.

So far it has been a success. Juilliard has bought a few violins and a viola from me, and The New England Conservatory purchased a whole string quartet.

OAW: You have a lot of irons in the fire! Did music school prepare you for the music business?

AL: Ha! Nothing of the sort. Conservatories train you for a solo career, which is a one in a million shot, or an orchestral career, which is also extremely difficult. You have to figure out on your own how to put on your own concerts and make your way. There’s programming, budgeting, publicity, social media, website and graphic design, grant writing, and fundraising. It keeps me busy! It’s hard to take a day off because there’s always something to do.

Postscript: You can hear LaMotte and Greg Ewer play work of Jean-Marie Leclair on their CD. You can also hear LaMotte and his wife, pianist Janet Coleman, on their recording, The Exquisite Hour. I heartily recommend both.

James Bash
James Bash enjoys writing for The Oregonian, The Columbian, Classical Voice North America, Opera, and many other publications. He has also written articles for the Oregon Arts Commission and the Grove Dictionary of American Music, 2nd edition. He received a fellowship to the 2008 NEA Journalism Institute for Classical Music and Opera, and is a member of the Music Critics Association of North America. 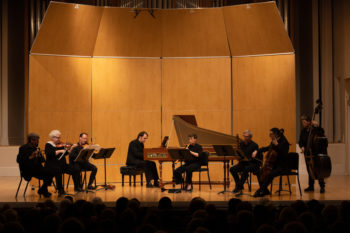