Keeping up with even the segment of Oregon’s increasingly busy music scene ArtsWatch can afford to cover (and we’d love to do more, if our readers and Oregon music institutions will help us pay for it) is nearly impossible when the season’s in full swing. It’s all we can do to tell you what’s about to happen, so you don’t miss the stuff you want to hear. That’s why we prioritize previews and reviews of continuing productions, like multi-performance operas. Readers have complained about us piling too many music stories at once, so we try to keep it to a maximum of one per day, which is about all we can handle with our current resources anyway.

That often means that reviews of non-recurring shows get pushed to the end of the line, or rather the end of the season. Which is where we find ourselves this month. With a few notable exceptions, most classical and jazz music institutions pretty much shut it down beginning in June, when western Oregonians at last joyously receive parole from our rain-huddled winter and spring imprisonment and head outside. Most of the rest, like the Astoria and Oregon Coast and Oregon Bach Festivals and Chamber Music Northwest, also call it a season when the smoke begins to descend. Which gives our writers (many of whom are working musicians and/or have day jobs) a chance to catch our breaths (figuratively at least) and finally catch up on those reviews they hadn’t time and/or we hadn’t room to deliver earlier.

That’s why you’ve been seeing reviews of events stretching back to early 2018 lately, and will be seeing more in coming weeks as our writers, once again stuck inside avoiding wildfire smoke, continue working through their backlogs. We hope you enjoy the memories until the new shows commence.

Which actually is, er, now! Yes, while a couple of major festivals close this weekend, no fewer than four more music festivals begin this week, including the annual William Byrd Festival, which runs August 10-26 at several Portland venues. Now embarking on its third decade of bringing Renaissance choral music to Portland, the annual festival includes public lectures, open-to-the-public choral performances at church services, an organ recital, and a pair of public concerts. Friday’s opening concert at Portland’s Old Church, directed by renowned English choral conductor Jeremy Summerly, features masterpieces from 1610-11 — the transitional period between the Renaissance and Baroque eras.

Friday also marks the opening of the annual Sunriver Music Festival, with a concert celebrating the centenary of one of America’s mightiest men of music, Leonard Bernstein. Along with his ballet score Fancy Free and joyously jazzy Prelude, Fugue and Riffs, the concert includes Rhapsody in Blue by one of Bernstein’s great inspirations, George Gershwin, and a brief, brash, bustling 1992 work by the American composer whose new Passion was premiered last month at the Oregon Bach Festival.

“While Toward the Splendid City was composed as a portrait of New York, the city in which I live,” Richard Danielpour has written, he actually began it during his year-long residency with the  Seattle Symphony, a Northwest sojourn which not surprisingly gave him “serious second thoughts about returning to New York. Life was always complicated in the city and easier, it seemed, everywhere else. I was, however, not without a certain pang of nostalgia for my hometown, and as a result Toward the Splendid City was driven by my love-hate relationship with New York. The work’s title comes from the heading of Pablo Neruda’s 1974 Nobel Prize address.” He wound up going back anyway.

Apparently, classical music fans are a bunch of winos. Or, put more delicately, the intoxications of the vine and the ears seem to complement each other. What I’m trying to say here (hic!) is that this summer sure features a lot of chamber music in wineries – Aquilon Festival, Villa Musica, and, beginning this weekend, Willamette Valley Chamber Music Festival. (Read Angela Allen’s ArtsWatch preview.) Heck, even Delgani Quartet is named after a winery. Maybe it’s just that Oregon cultivates so much good stuff from both fields. This weekend’s performances feature a barrelful of music by Haydn, Beethoven, and one of our greatest living composers, Joan Tower, who’ll be there to talk about her work. Stay tuned for Matthew Andrews’s interview with Tower.

At Thursday night’s concert, chanteuse Siri Vik returns with a chamber jazz quintet (including cello and violin) in mid-century Euro-standards made famous by French chanteuse Édith Piaf, including “The Windmills Of My Mind,” “Just a Gigolo,” and of course “La Vie en Rose.”

Vik returns on vocals (in English this time) for Friday night’s concert featuring one of jazz’s greatest living vibes masters, Chuck Redd, leading a quintet including young Oregon trumpet titan Tony Glausi and guitarist Howard Alden in songs made famous by Frank Sinatra and Count Basie: “Where Or When,” “One For My Baby,” “Luck be A Lady,” “I’ve Got You Under My Skin” and more. 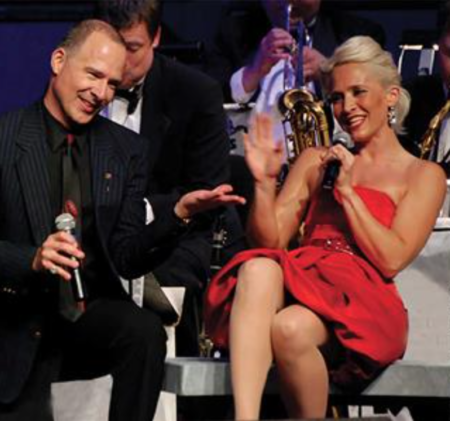 Saturday’s matinee nostalgia trip is more than a concert, taking the form of one of the old TV variety shows. Michael Stone and Siri Vik lead a jazz combo in tunes like “The Lady Is A Tramp,” “Days Of Wine And Roses” and more — and also leavening the tunes with comedy, skits and other fun foolishness thanks to singer-actors like Bill Hulings and Ian Whitcomb.

This year’s festival closes Saturday night when Brabham leads a quintet of singers and a dectet Saturday night in a celebration of music by Guys and Dolls songwriter Frank Loesser, who also wrote so many other classics: “Baby, It’s Cold Outside,” “If I Were A Bell,” “Two Sleepy People” and more.

Another worthy tradition, pianist Michael Allen Harrison‘s Ten Grands project, raises funds for his Snowman Foundation, which gets pianos under the hands of kids who otherwise mightn’t have a chance to play them. Their annual concert takes place this year at the home of the mighty Hops, Ron Tonkin Field in Hillsboro, and features Harrison, fellow smooth pianist Tom Grant, singer Julianne Johnson, McMinnville’s We Three, and more — including fireworks.

Got more jazz or other recommendations? Slap ‘em down in the comments section below.