Neil Simon, maybe the most successful playwright in American history, died today at 91, leaving behind a little piece of who we are and how we got this way. Not quite a year ago, in a piece on the Portland Civic Theatre Guild (the old PCT, like the old Mark Allen Players, had often thrived on Simon’s plays), I tried to give Simon and his singular approach to theater and comedy a little context: 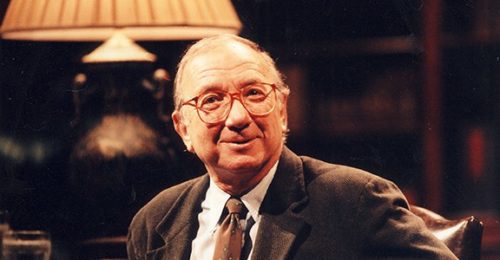 “On Tuesday the object of their affections was I Ought To Be in Pictures, the 1979 sentimental comedy by Neil Simon, who is considered something of a ghost of theater past these days but not so many decades ago was the toast of Broadway, and the movies, too, a figure who so dominated the Broadway real estate that younger writers and audiences rebelled against virtually everything about him – his jokiness, his eagerness to please, his devotion to craftsmanship, his middlebrow-ness, his upper-middle-class-ness, his self-congratulatory sentimentality, his sometimes clueless maleness, his unseemly success, his belief that maybe the theater was entertainment and not so much art.

“Well, those battles have been fought, and now, maybe, it’s possible to consider Simon’s plays the way we think of other works from a specific style and period: like Restoration comedies, for instance, in which the artificiality and reliance on coincidence were part of the joke. It’s all artificial, from Shakespeare to Ibsen to Mamet to Shepard to Lynn Nottage to Lisa Kron to Suzan-Lori Parks to Lin-Manuel Miranda and beyond. That’s why they’re called ‘plays,’ not ‘life.’

“Simon was a crown prince in a golden age of American entertainment, especially comedy, when Jewish writers and performers, calling on their recent-immigrant family status and their urban identities and the awful astonishment of having emerged on the other side of the Holocaust, recast the American idea of humor in their own image: Mel Brooks, Mort Sahl, Carl Reiner, Sid Caesar, Lenny Bruce, Woody Allen, Mike Nichols, Elaine May. It was a takeover of sorts of the WASPish mainstream, and it cracked the culture open for further change.”

The full piece, Tuesdays at the Theatre Guild, is here.