Rounding up the news from celebrations of life to a theater's stolen computers to free Beethoven in Washington Park.

MEMORIAL GATHERINGS are coming up for two significant and much-loved Portland theater figures who have died this year: Connie Carley, a founder and managing director of PassinArt: A Theatre Company; and Stan Foote, director, performer, and longtime artistic director of Oregon Children’s Theatre.

Constance G. “Connie” Carley died in early summer at 72, from cancer. She had been with PassinArt since its founding 40 years ago, helping to provide a consistent home for Black stories and Black performers interpreting works by playwrights including August Wilson, Pearl Cleage, John Henry Redwood, Langston Hughes, and many others.

For four decades she was the behind-the-scenes glue that held things together and a determined force that pushed the company forward. “Connie was an activist whose work spoke for her,” PassinArt Artistic Director Jerry Foster said in this story about her life and career. “She was not competitive but always supportive. She worked tirelessly to make sure every young person had a voice through the arts and everyone had access to the stage if that was their desire.”

Carley’s Celebration of Life will be at 2 p.m. Saturday, Aug. 20, at Alberta Abbey, 126 N.E. Alberta Street, Portland. All are welcome. In place of flowers, the family suggests a donation to the PassinArt: A Theatre Company Living Legacy Fund.

Stan Foote, who as a visionary artistic director helped build Oregon Children’s Theatre into a nationally significant company, died on May 18, also from cancer. He was 69, and had moved to Puerto Vallarta, Mexico, after retiring from OCT in 2019. Under his leadership OCT produced 20 world premieres, including collaborations with novelists Lois Lowry (The Giver) and Louis Sachar (Holes) and playwright/adapter Eric Coble (The Giver, The Storm in the Barn, Sacagawea).

A man of sharp theatrical savvy and wry, upbeat humor, Foote was known and revered not just as a brilliant director and leader, but also as a memorable teacher and, to many both inside and out of the theater world, a good friend. You can read more about his life and work in this appreciation.

A Celebration of Life for Foote will be at 4 p.m. Monday, Aug. 29, in the Dolores Winningstad Theatre at Southwest Broadway and Main Street in downtown Portland. It’ll be casual, everyone’s welcome, and masks are strongly recommended.

THE – ISM PROJECT. Art is about stories, and stories come from people of all ages and all places, with all sorts of backgrounds. Portland’s multicultural production organization MediaRites collects and disseminates a lot of them, including from its – ISM Youth Files, a collection of tales from writers ages 12 to 21 who come from places as far-ranging as Connecticut, India, Massachusetts, Minnesota, Indiana, and Oregon.

Their stories focus on responding to the challenges of isolation among young people and its effect on mental health and self-care, especially in BIPOC and disability communities. An ebook of their writings containing monologues, personal essays, poetry and short graphic novelettes will be released this fall, and several short films and podcasts are also in the works.

In the meantime, you can get an early look at 2 p.m. Saturday, Aug. 27, at Portland’s Curious Comedy Theatre, 5525 N.E. Martin Luther King, Jr. Blvd., in a partnership between MediaRites and Oregon Children’s Theatre. It’s a masks-required event, and will include live readings and pre-recorded videos, followed by a BIPOC panel of mental health experts to talk about mental health resources and options for youth.

MediaRites’ executive director is the Peabody Award-winning producer Dmae Lo Roberts, whose Stage & Studio podcasts are produced and distributed in collaboration with ArtsWatch.

TBA TURNS 20. Time flies, and the bouncing baby that was TBA, the Portland Institute for Contemporary Art’s Time-Based Art festival, is a strapping 20-year-old. What began in 2002 as a festival highlighted by an extraordinary outdoor performance by the Japanese Butoh-inspired duo Eiko & Koma has kept the contemporary flag flying annually ever since, and has just announced its 2022 lineup, which will run Sept. 8-18. Los Angeles musician San Cha will headline an opening night show of visual and musical performance. You can get the full story, and the full festival lineup, on the PICA website.

REVAMP YOUR LOCAL LIBRARY. The Multnomah County Library system is a public treasure, but lately it’s been something less than an open book. Make that, an open branch. Thanks to a library building bond approved by county voters in 2020, seven branch libraries are due for renovation or expansion, and East County will get a brand new flagship branch. Among such old-building necessities as plumbing upgrades, library branches will gear for the future with gigabyte speed internet.

Renovation, of course, means disruption, and even temporary closure. Central Library in downtown Portland shut its doors on Aug. 1 to make renovations quicker, and is expected to stay closed until Nov. 1. Other branches due for upgrades include Albina, Holgate, Belmont, Midland, North Portland, Northwest, and St. Johns.

Veteran Portland journalist Fred Leeson, who follows architecture, planning, and historical preservation issues on his website Building on History, reports in some depth on plans for the revival of the Albina Branch, 216 N.E. Knott St. In a column headlined Good News in Albina, he describes plans to restore the original lines of the 1912 Spanish Renaissance-style building, one of seven branch libraries in the county funded by Andrew Carnegie, to its original lines and detail.

Under the proposal it would become the children’s reading room, and connect to a new, two-story building behind, which would serve more general purposes and, because the street behind is at a lower grade, “would hardly be visible behind the historic entrance on Knott.” The complete project, Leeson reports, is expected to be finished in late 2024.

PROFILE PICKS UP AFTER BREAK-IN. The note from Profile Theatre, which has been exploring the works of modern and contemporary playwrights for 25 years, was both urgent and determined. “We need your help,” it began. “Sometime in the wee hours of the morning” on Aug. 1, thieves broke into the company’s Pearl District office and stole all of the theater’s computers. “To make matters worse, having gotten ahold of our company management computer, they were able to break into our Quickbooks, create dozens of fake employees, and run tens of thousands of dollars of payroll to themselves before staff arrived the following morning, called the police, and put a freeze on our accounts.”

Profile’s bank reversed the stolen payroll and restored the money to Profile’s account, but “we find ourselves needing to purchase six new computers in the next three weeks before the start of rehearsals for the coming season.” The missing computers are crucial to the company’s marketing, box office, management, and production departments – all of that off-stage stuff that keeps things rolling onstage – and rehearsals begin Sept. 7, which doesn’t leave a lot of time. Profile’s seeking $15,000 in donations by Labor Day, and has a “donate” page where you can toss some money in the hat if you feel the urge.

First show up in the new season is Kristoffer Diaz’s pro wrestling comedy The Elaborate Entrance of Chad Deity, which is set to open Oct. 4.

LAJOS BALOGH’S FREE CONCERT IN THE PARK. Outdoor concerts come and go, but a few have special staying power. Conductor Lajos Balogh has been leading free concerts in Washington Park almost every summer for the past four decades, for most of those years as leader of the Portland Festival Symphony, where he became conductor emeritus in 2016, and this month with his own Lajos Balogh Symphony Orchestra. Showtime’s 6 p.m. Sunday, Aug. 21, at the Washington Park Amphitheatre.

Balogh, who came to the U.S. from Hungary in 1967, began the park concerts in 1981, and it’s always been important to him that they be free. “This is his way of giving back to the great country that adopted him, celebrating the European tradition of bringing outdoor symphony concerts to the people,” his son and fellow musician, 3 Leg Torso’s Béla R. Balogh, said in a Facebook post.

“It’s especially dear to me, as this is the first time I’ve been fully hands-on with the production of a concert with my dad – Everything from working with the City of Portland acquiring permits, overseeing the management of event insurance, jumping through the hoops with noise ordinances, and even making sure there are porta potties on site. I admit that it’s been quite a ride. These concerts are fun, so let’s do this!”

Bring your own blanket and chairs, pack a picnic if you like, and settle in for an evening of music by Beethoven, Sibelius, Dvorák and Copland. The musicians are good, and free is a very good price. 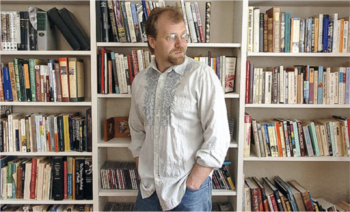