Jewell, a native of Oklahoma City, has been an administrator at various performing arts organizations for more than 20 years, including stints as executive director of Orlando Ballet, Oklahoma City Ballet, and OK Mozart International Music Festival.

“It is an absolute honor to join the incredible team at Oregon Ballet Theatre during such a momentous time in the organization’s trajectory,” Jewell said in a statement released by OBT.

“These are exciting times as our artform evolves to meet the needs of our community and serves new audiences,” board chair Cate Sweeney said in the same statement. “While we are proud of the progress OBT has made, there remains a lot of work ahead.”

Oregon Ballet Theatre is in the midst of a major leadership reshuffle. It has recently named Katarina Svetlova as director of its ballet school, and is seeking a replacement for its longtime music director and orchestra conductor, Niel DePonte, who recently resigned. And it’s searching for a new permanent artistic director: Former OBT dancer Peter Franc has been interim artistic director since the company parted ways with former artistic director Kevin Irving in June 2021. Irving was named executive director of Portland Columbia Symphony Orchestra in May of this year.

A chorus of praise for Katherine Dunn’s “Toad”

It took nearly half a century for the late, great Portland writer Katherine Dunn’s “forgotten” novel Toad to get published, as ArtsWatch’s Amy Leona Havin explained in a fascinating interview with Dunn’s son, Eli Dapolonia, about the book’s roots in 1960s counterculture Portland and its long and tortuous route to publication.

Dunn, who died at age 70 in 2016, is celebrated for her groundbreaking third novel, 1989’s Geek Love, about a family of traveling carnival freaks, which was a finalist for the National Book Award. But Toad was rejected by multiple publishing houses, and Dunn put it away for decades. It was finally published this month by Macmillan, on Nov. 1, and the major reviews have been pouring in. So far they are largely enthusiastic, and perplexed that the novel was so roundly rejected all those years ago.

Walter Cole – or Darcelle, as you might better know him – embodies the idea of Portland celebrity, and he’s turning 92 on Wednesday, Nov. 16. So naturally a bunch of his friends, including Pink Martini’s Thomas Lauderdale, Triangle Productions’ Don Horn, and restaurateur Lisa Schroeder, are throwing him a birthday bash. Walter/Darcelle, who is officially certified by the Guinness Book of Records as the world’s oldest drag queen performer, will be feted at Schroeder’s Mother’s Bistro & Bar, 123 S.W. Third Ave. downtown, from 5 to 6 p.m. Wednesday. Admission’s free, and everyone’s invited.

It’s also, as it turns out, a musical celebration: Lauderdale and Cole recorded two songs together – The Rose and What’ll I Do – and they’ve been released on a limited-edition CD, which you can buy (and have signed by the artists) at the birthday bash. As the invitation says, “No reservations needed. Just you to come and enjoy. No host bar, nibbles and for Walter/Darcelle a lemon cheesecake/birthday cake.”

News & Notes: A fanfare for funds 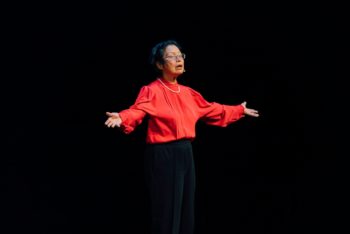