Editor’s note: this is the second of our two-part coverage of the Oregon Bach Festival’s Composers Symposium. Read Gary Ferrington’s story here.

This year marked the 25th anniversary of the Oregon Bach Festival Composers Symposium (OBFCS) led by renowned composer and University of Oregon professor Dr. Robert Kyr. Over the course of two and a half weeks, from June 25 to July 13, more than 100 composers like me, performers, and conductors – many wearing multiple hats – converged for a unique experience of collaborative performance and learning. Geared toward emerging composers, attendance represented a wide range across the age and experience spectrum. Many of us wrote new pieces specifically for the Symposium.

One of the most enticing aspects of the symposium for us composers was the opportunity to both attend concerts by and have your work performed by guest artists of the highest caliber, including musicians from the New Mexico Philharmonic, Juilliard School, Oregon Symphony and more, as well as the star performers at the University of Oregon. (See Gary Ferrington’s ArtsWatch report on this aspect of the symposium.) We were immersed in a diversity of pieces that included everything from vocal works and guest artist’s solo performances to chamber pieces, collaborations with Korean Instrumentalists, and improvisation.

We heard 53 premieres by participating composers in 22 concerts performed by a mix of participants, guest artists and Sound of Late, the Northwest-based ensemble in residence. There was so much to do! Like with any other conference one can’t do it all, though some people – very sleep deprived by the end— certainly tried!

In response to the recent increase in opportunities and commissions for vocal music, the first four days were dedicated to the Vocal Fellows program, a new opportunity for composers and performers to be mentored in master classes and rehearsals by Estelí Gomez, a featured soprano with two Grammy-winning ensembles, Conspirare and Roomful of Teeth. Most who worked with her, even seasoned vocalists, came away having learned something new. 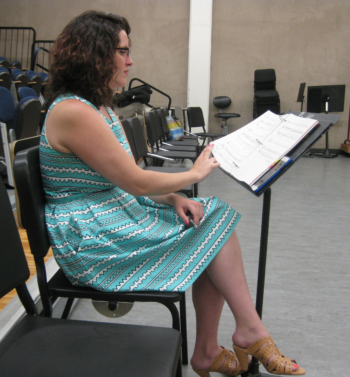 A delegation of performers and composers from South Korea, the Society from New Korean Music (Sinakhoe), delivered a demonstrative seminar on the nuances of Korean instruments, and collaborated on new pieces with participants, incorporating the traditional Korean instruments, concluding with an inspiring concert. Other options for participants to explore included joining gamelan and improvisation group session, followed by a performance by each one on the last day of the symposium.

Having just scored my first film this year, I was excited by the inclusion of a film festival over the course of two nights showcasing film scores composed by participants. The composers discussed the process of working with the directors of the film. Especially informative for me was explanation on how composers need to sync the music with the timecode of film.

A key draw of the symposium is the opportunity to attend presentations and interact with distinguished composers – both from the University of Oregon and those brought in as composers-in-residence. Our host composer, Robert Kyr, has composed 12 symphonies, and much, much more. Recently, the American Academy of Arts and Letters honored him for distinguished lifetime artistic achievement. Dr. Kyr delivered two enlightening seminars on his values and his approach to both music and life, with examples of his music. He begins with spiritual themes and archetypes, and composes large-scale works from there. We endeavor “to create the music we believe in – who we really are,” he said, “then we can move the world forward.” 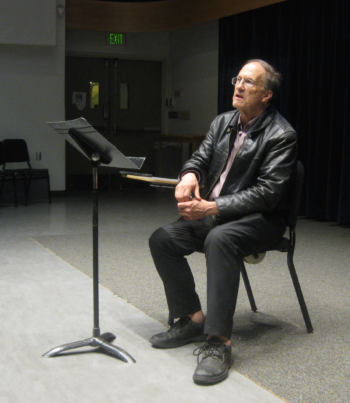 Celebrated guest composer Martin Bresnick has been awarded the Charles Ives Living Award from the American Academy of Arts and Letters, Rome Prize, Berlin Prize, a Guggenheim Fellowship, among many others, and is a recognized as an influential teacher of composition at Yale University. At the Composers Symposium, he provided insightful presentations about his compositional process and the diversity of his compositional output. Highlighting three of his works, Parisot for 12 cellos, Everything Must Go, for the Prism Saxophone Quartet and Grace for two marimbas and chamber orchestra, Bresnick demonstrated how he uses overtones, structure and symmetry in his work.

Through small focal groups, he and Rob Kyr worked with composers offering constructive, albeit sometimes challenging, feedback on our pieces and compositional processes, including valuable suggestions for compositions to listen to, based on our individual compositional interests.

Our third mentor was Richard Danielpour, considered one of the most sought after composers of our time, whom the festival commissioned to write a new passion premiered here on July 8. He has received two awards and fellowships from the American Academy and Institute of Arts and Letters, the Guggenheim and Rockefeller Foundations, and the Berlin Prize from the American Academy in Berlin, as well numerous commissions from some of the most celebrated artists and musical institutions of our day. Currently teaching at UCLA, he is regarded as a devoted educator and mentor.

Danielpour conducted two seminars for the Composers Symposium. In the first, he discussed his philosophy, values, teachers, inspirations, processes and “What it means to be a composer.” Unlike many composers, his compositional decisions are driven more by his intuition than his intellect – such as the number of movements in the new passion. While he never stated it explicitly, I got the sense that social justice and social understanding are important in directing his compositional energy. He dissected his 2012 work, Toward a Season of Peace, exposing its structure and expounding the details of its three parts and seven movements. Danielpour then drilled down discussing the tactical approach of his composing and offered a “top five” list of advice for composers.

Philip Glass, widely regarded as one of the most influential musicians of the late 20th century, was the Oregon Bach Festival’s other Composer in Residence for the 2018 season. He has written numerous operas, eleven symphonies plus eleven concertos, and many string quartets and mixed chamber pieces and film scores. Three of his film scores have been nominated for Academy Awards. I wasn’t able to attend all of Glass’s events, so I asked my my fellow Cascadia Composer Dawn Sonntag for her assessment.

“The four-day Phillip Glass Symposium, which took place from July 9 – 12, connected the Oregon Bach Festival and the Composers’ Symposium, with a combination of public concerts and interviews as well as discussions with the Composers Symposium participants. On Monday evening, July 9, Robert Kyr led participants in reflection on and discussion of Glass’s life and influence on contemporary music, with a 1984 documentary film about Glass’s opera Einstein on the Beach and A Portrait of Philip in 12 Parts.

“The next day, Glass appeared in a public interview with KWAX radio host Peter van de Graaff at the Hult Performing Arts Center. Glass shared anecdotes about his life as a philosophy student and his studies in Paris with Nadia Boulanger, and also performed two of his own piano works. On July 11, pianist Simone Dinnerstein premiered Glass’s Piano Concerto #3 (which he wrote for her) with the festival orchestra in a public concert at Beall Concert Hall, as well as Bach’s Brandenburg Concerto No. 3 and Keyboard Concerto No. 7 in g Minor. The sold-out performance also included Glass’s String Quartet No. 5.

“On Thursday, July 12, Glass spent nearly two hours with Composers Symposium participants in a private question and answer session. Glass radiated a sense of openness and generosity, sharing how he worked day jobs – including moving furniture – till age 42 so that he could pay his Phillip Glass Ensemble members and how his collaborations with writers and performers has been key to his growth as a composer. At 81, Glass said he is nowhere near finished composing; he said that aging has led him to hear and experience music in new ways, leading to new perspectives and fresh ideas.”

Along with all this general information, the symposium provided us composers valuable direct feedback on our own compositions, including my Free Land, in which (for example) the performers provided feedback in better balancing the trumpet with the violin based on the resonance of the performance space.

The premiere of Free Land’s first movement, Homeland, was everything I imagined it would be. We each received recordings of the pieces a few weeks after the symposium concluded.

The greatest thing about the symposium is the opportunity to hear 65 premieres in a week, and the inspiration of so many people – composers, many of whom very personal works for the symposium, the performers, many also composers, who worked hard to ensure these premieres had outstanding performances, and Rob Kyr and the dedicated staff at University of Oregon who made all the magic happen.

Christina Rusnak is a multifaceted Portland composer and explorer whose work reflects a diversity of styles and points of view. Passionate about composing about place and the human experience, she actively seeks to integrate facets of landscape, cultural history and art into her work.