by BRUCE BROWNE and DARYL BROWNE

James DePreist, famed conductor of the Oregon Symphony from 1980-2003, once shared with me his thoughts on producing a recording. During his tenure, the orchestra produced 17 recordings, one of which, in 2003, garnered a Grammy nomination. He said it was definitely not to make money, but to preserve a moment in time in the history of the organization.

Two fine choral organizations – one local and volunteer, one operating from the Southwest United States and professional, have this past year each recorded a moment in their musical time. Let’s take a look at how the two recordings share a common goal – to celebrate our choral music journey in America. 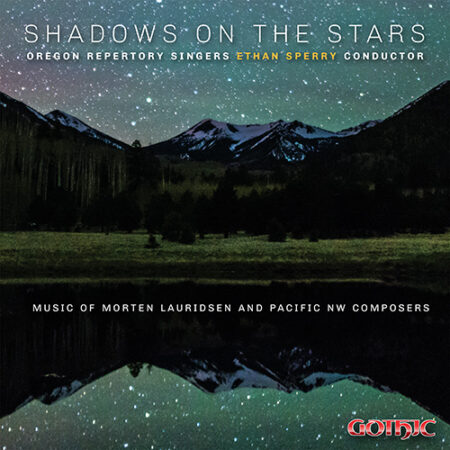 Oregon Repertory Singers, founded 45 years ago, ably directed by Ethan Sperry in 2012 (succeeding Gil Seeley) has stood out among the numerous fine choral groups in Portland. Their CD Shadows on the Stars, released on the Gothic label, features Northwest American composers. Some are well known, such as Morten Lauridsen, Joan Szymko and John Muehleisen; some are rising stars like Giselle Wyers, Naomi LaViolette, and Stacey Philipps.

The Santa Fe Desert Chorale offers a broader spectrum, still hewing to the “Made in America” qualification. Artistic Director Joshua Habermann, currently director of the Dallas Symphony Chorus, is also in his tenth year with SFDC. In The Road Home, his programming delves more deeply into the American past, honoring the Shaker tradition by excerpting (Track 4) from the “American Vocalist” a collection of American voiced music, published in 1849, a valuable moment in American choral tradition in print form. Each CD provides a strong representation of the traditions and abilities of each choir.

Striking features of the ORS recording include its empowerment of female composers (new voices of Wyers, LaViolette, Philipps), inclusion of thoughtful poetry (Rossetti, Neruda, Gioia, Agee, etc.) strong instrumental accompaniment (piano and violin) and the warm, flattering acoustics of Reed College’s Kaul Auditorium. Dr. Sperry is to be commended for nurturing a fluid and expressive sound from the 90+ singers.

The sanctuary of Portland’s First United Methodist Church (FUMC) is uneven in acoustical response. Specifically, we hear a heaviness of piano in places, and the fluctuating acoustic produces balances that are not always flattering. In addition, the FUMC tracks were sung live in concert, often a risk (a singular moment, where the blemishes remain). The Kaul recordings were like a taped studio session. Ergo, on the CD the choir has two sonic personalities: one in Kaul and one in FUMC.

By themselves, each of the Kaul recordings in tracks 1-2 and 11-15 is a winner. If one listens to them in sequence, a soporific pall may set in, due to the similar tempi.

Track 1 is from the pen of the brilliant Oregon-born composer Morten Lauridsen. Ya eres mia (Now you are mine) is one of his more recent works. Lots of movement, varied dynamics and a rich tone, particularly in the male voices, characterize this setting of Pablo Neruda’s famous poem.

Track 2 is from the pen of nationally recognized composer and Portland resident Joan Szymko. Illumina le tenebre typifies Ms. Szymko’s eclectic style, a nice feature, since her style is not capable of being pigeonholed. This setting of a prayer by St. Francis of Assisi is modal, chant-like, haunting. The perfect tuning of the choir and the well-spun legatos are hallmarks here. Sopranos are a bit thin on the very top a few times, but no matter.

Let’s skip for now to the final five tracks, also recorded in Kaul Auditorium, under the conditions of a recording studio atmosphere, not the as products of live recordings.

Steven Goodwin and Naomi LaViolette’s Melancholy Flower (Track 11) shows off what the choir can do with pp-mp (very soft to moderately soft) dynamics, but the piece itself meanders slowly through a bare harmonic landscape, dominated at first by the lone texture of the piano played by LaViolette, who is also ORS accompanist.  The choral background offers little in the way of movement. A shallow surface rhythm with piano ornamentation is the dominant feature.

Track 12. A poem of Dante Gabriel Rossetti is the text for Portland composer Stacey Philipps’s haunting Sudden Light. The women’s voices here are beautifully blended and tuned. Farther on, the men bring a strong presence. This a nicely crafted piece, well nuanced by the choir.

On track 13 the music of Giselle Wyers, also a highly respected choral conductor at University of Washington, is represented with “A Lonely Land.” Here, she weaves a beautifully layered tapestry with piano, violin and voices.

Track 15. With a liturgical text set by Morten Lauridsen and centuries of composers before him, this O Magnum Mysterium (1994) is a lovely paean both to the core of the miracle of birth of Christ and to the composer’s wealth of talents. Carefully balanced and crafted by Dr. Sperry, it taps the essence of this composer’s iconic work.

Track 3. John Muehleisen is a prolific Seattle composer with several stunning premieres in the last five years, residing in Seattle. River Moons is cleanly and delicately sung by the choir, which almost never reveals its true numbers in sound. That is, the eight-dozen singers can sound like a small chorale in pieces like this, admirably.

Tracks 4-9. The Lauridsen cycle Madrigali, recorded many times since its completion in 1987, is not flattered by the spongy acoustics of the FUMC sanctuary. Originally composed with a small choir in mind (the University of Southern California Chamber Choir) this cycle, because of some of the busy tempi in some places, is not always well suited to a choir of ORS’s proportions in a parlous recording acoustic. Imagine basketball, played by 12 people on a team: the confines of the court make it awkward to play, and it’s a completely different game. Numbers do make a difference; that’s why enlightened symphony orchestras use fewer players for say, Haydn, than they do for Brahms. That’s why early music, like madrigals, are at their best for 4-12 voices, never 40-50. This track is noteworthy, however, as a lovely moment in time when the composer joined the choir on the piano.

Track 10. Sure on this Shining Night (text of James Agee) with the composer at the piano, is a perfect addition from the Lauridsen canon. Contemplative and wistful, it flatters the Agee text perfectly. The men of the choir produce a lovely sheen in the opening bars. 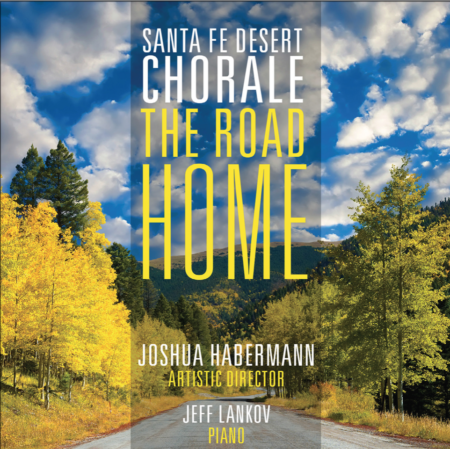 Professional singers from across the country gather as the Santa Fe Chorale to present choral music of the highest quality. Director Joshua Habermann’s strengths are variety, clarity, phrasing and declamation. This CD was recorded in October, 2017, in the Morton Meyerson Symphony Center, Dallas, Texas.

Tracks 1-3. In the first three cuts, the elegance of simplicity is emphasized. Less is more. Beginning with “In the sweet by and by” (arranged by Aaron Humble), soprano Kathlene Ritch spins a stylish thread. When the choir enters, it’s with a razor’s edge of sound that retains the same level of simplicity.

The next two pieces, “The Lark” and “The Nightingale’s Song” (traditional Shaker pieces), are also headed by the sweet soprano voices of Esteli Gomez and again, Kathlene Ritch. All three are marked by elegant phrasing, illustrating texts that are at once innocent and benevolent.

Track 5, the traditional Shaker song ”Encouragement,” captures a sort of rough-hewn delivery that fits the text “So do be good, bow low, low, low…”. The men’s voices carry much of this piece.

Tracks 6-8 are from the cycle Heavenly Home: Three American songs by American composer Shawn Kirchner. The best is the opener, “Unclouded Day”; textures move from soloistic, to winding, twisting melodies. Kirchner’s gift is harmonic batting, driving accompaniment and building tension toward a predictable yet stirring climax. The choir sings his intent.

Track 9. Haitian-American Sydney Guillaume’s “Dominus Vobiscum” (God be with you) – is innovative in texture and tonal statements, but the piece does not thrive. Sung in Haitian Creole, replete with chant-like statements to the text of Mr. Guillaume’s father Gabriel, it doesn’t go anywhere, no matter how choir and conductor try to propel it. Mr. Guillaume is thriving, however; look at his work and await more to come.

A relative newcomer on the stage of exciting young American composers, Jake Runestad is featured in the tenth track. Reflections, based on the writings of Henry David Thoreau. This commission by SFDC is almost two pieces in one: the opening a kick in the pants admonition to the listener to “…fill up our pores with our blood… so that the wave of each inspiration shall break on our farthest shores.” The music then pivots to flatter the text, “There is a calmness of the lake, when there is not a breath of wind…” And Runestad perfectly paints this serene picture with musical onomatopoeia. This is a fine introduction for listeners who have not heard this composer.

Track 11-13. Three excerpts from one of the early Lauridsen cycles, Mid-Winter Songs, show the choir at its best. These performances glitter, phrasing is nimble, with constant forward movement, combined with respect for the relative weight of declamation of each syllable in each phrase. As must be the case, the pianist here, Jeff Lankov, is brilliant, aggressive, never dominating. Balance is such that we hear each note in the shimmering Lauridsen clusters.

The Road Home of Stephen Paulus (1949-2014) is a great choice, flattering the total programming with a beautifully layered sound. Paulus is a truly great American choral and operatic composer who was taken from us far too soon.

The final selection on Going Home is the ballad “I’ll Be Seeing You” (composed by Sammy Fain) skillfully arranged by Phil Mattson, iconic vocal jazz arranger and performer who passed away this past January at age 80. His contributions to jazz arranging and singing were manifold and he will be missed. For a precious moment, go to this arrangement, sung by SFDC, on YouTube.

The Americana in both CDs is at times nostalgic, often nurturing and illuminating in terms of the future of American choral composition. Both conductors honor their own choir’s capabilities – one a group of nationwide professional vocalists, one group of talented local amateurs – as they honor our American sound.

There exists a trend in the 20th-century to current choral literature toward homophonic, coloristic masses of sound. And these literature choices are my only concern with both CDs – almost exclusively (save for a few of the Lauridsen) so. Lovely pieces, by themselves, but as a grouping rather quiescent. But many listeners will love the panorama of soundscape and cherish these darlings of this moment.