‘Orfeo ed Euridice’ review: back from the dead

by BRUCE BROWNE and DARYL BROWNE

I’ll admit, I’ve been negligent about my concert attendance of late. My reasoning, I suppose, is that I needed a good long rest. But now having roused myself to attentiveness I have heard that I perhaps made a bit of an impression back in my day; that my ideas on opera might have taken off. Perhaps I left the art form better for my having been one of its most ardent of admirers. And right here, I see that the Portland Opera is performing my Orfeo ed Euridice. Delightful!

So it is that Christoph Willibald von Ritter Gluck is sitting in the fifth row center at the Newmark Theater in Portland5 Center for the Arts. In an otherworldly haze (he’s been dead some 230 years), he’s leafing through the Portland Opera’s magazine TOI! TOI! from the 2017-18 season taking stock of the opera performances that have preceded his. A Rossini (La Cenerentola), a Gounod (Faust), a Verdi (Rigoletto). A season of grand tales. Grand stages, grand effects, grand orchestras and, then, there it is. His Orfeo ed Euridice as the end piece. The closer. Did he imagine when he sent it into the world in 1762 that it be a firestarter, reigniting a smoldering musical genre?

Actually, yes, this was his master plan.

This plan was years in contemplation. For so long, opera had been disfigured, abused. Soloists performed florid arias, repeating passages with embellishments not once but twice, thrice, only to launch into ego-boosting cadenzas. Ah, well. I had a different idea in mind.

Gluck, Bavarian by birth, had his first opera produced in Milan in 1741, on a libretto by the revered Pietro Metastasio. This prolific poet and librettist was living in Vienna and enjoying extreme popularity as a poet for the virtuosic singer, writing not for the drama but for the virtuosic effect. The story line, character development and plots became secondary. Opera Seria stagnated in this atmosphere

Oh, those operas of Metastasio — “opera seria.” I had grown weary of the ridiculous pandering to vocalists, the loss of story. I longed to return to the great tales, to make the stage come alive with movement and fill the air with music in search of a story. Oh, but did it cause a commotion.

Gluck (and later Mozart) would place all forces (singer, orchestra, ballet, chorus, staging) on equal footing, all in the service of the story. The Handelian da capo “variations” were decapitated. Orchestral overtures, chorus and ballet were added. Gluck had already broken away from “opera seria” in the years prior to Orfeo with several “opera comique.” Now he would tackle the status quo of opera seria.

I sit here anticipating with joy the first strains of the overture. Reintroducing “overture” as an fundamental element of the opera drama, letting the orchestra help tell the tale: a good move, indeed. And after the mood is set, onward will come the chorus. Oh, how welcome is the return of opera chorus. Oh, here they come. Brave tutti!

Gluck chose Orpheus, Greek god of superlative musical skills, to lead his “revolution” against opera seria, to guide music to a new plateau once again. Over a century earlier, Claudio Monteverdi and librettist Alessandro Striggio guided opera to its fully realized dramatic potential with hero Orpheus at the helm, although Gluck’s ending is more sanguine for the two title lovers than is Monteverdi’s. Gluck and his librettist, Ranieri de Calzabigi, created their Orfeo, with only three main characters, to illustrate their principles. They later published these principles in a “Manifesto” as the preface to a 1767 opera Alceste

There is my own Orfeo, my hero, in gleaming white, in the opening strains of “Chiamo il mio ben.” Wait. A woman? Playing the role of Orfeo which was written for a high tenor. This is, this is….my gracious, this is quite good. Her acting, her tone as pure as Guadagni, as Legros. A talent to be sure.

Sandra Piques Eddy in the role of Orfeo was a marvel of vocal color, acting and facial expression. Hers is a major mezzo-soprano instrument with an afterburner in the chest register, which fit perfectly with Gluck’s (original) casting of Haute-contra tenor (a very high but full tenor voice). It is common practice in the twentieth century for the role to be played by a mezzo. Ms. Eddy’s voice fulfilled the musical intent brilliantly.

Amor, dear Amor. Again, I shall set aside my gender expectations and my vision of a stentorian, patriarchal being. This playful, comic Amor has captured my imagination. And the costume, the hair, the acting. What a portrayal! I am glad I allowed Amor to embellish at least one return of the first section of his aria.

With a wink and a nod, Helen Huang portrayed Amor, who appears twice to solve Orfeo’s dilemma. Huang is a fine singer, in this role the perfect singer/actor to pull off the comedic touches while navigating the challenging musical lines. Huang first shows up to inform the grieving Orfeo that through his profound love he may descend to the underworld and retrieve Euridice (but uh uh, no eye contact), and later to save the lovers after they do indeed make eye contact.

But first, Orfeo must brave the journey through the Furies.

I rise from my seat. My heart is beating, my attention riveted upon the Furies now rising from the depths of the underworld. The chorus is singing, the ballet “Dance of the Furies” (from my later French revision of 1774) is mounted within the drama; it is the realization of my dreams. The stage is alive with the future of opera. Descend into Hell, brave Orfeo to save your Euridice.

This scene was, as Master Gluck has pointed out, perfection. The was POA Opera chorus at its finest. A well blended, balanced true choral sound even while spread across the set as mourners, furies and spirits. The choreography, stunningly appropriate and graphic, including the physical rending of a friend of Orfeo, perhaps for not singing beautifully enough. No, he was a dancer. In any event, it provided one of the most riveting moments in the production as the curtain dropped on Orfeo walking bravely to Hell. 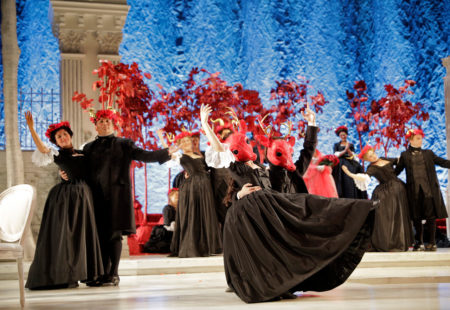 Upon the opening on Act II, Scene II, the audience gasped and applauded for the set, designed by Jacob A. Climer, whose crimson, black and champagne costumes, set against a shimmering blue backdrop, were breathtaking. It is Elysium, that level of Hades in which the happy souls spent their eternity. And it is where Orfeo will find Euridice. And it is here especially that the orchestra, directed by Nicholas Fox, did shine. The instrumental members of this POA production were steady on though a bit of thickness in the double winds at times overpowered the excellent strings. Balance between the sound of the orchestra in the Newmark pit and the three onstage soloists was good overall, with only a few moments where upstage solo passages were covered.

Finally, here is my Euridice. Alas, and of course, she is a female, though again in my day… Oh, in my day we did not revere the female voice on public stage. For shame that. My, this Euridice has verve. And just look at the amusing horns and antlers on the heads of all. And how excellently the doe/stag ballet, “Blessed Spirits” matches my music. Blessed flute.

Lindsay Ohse, soprano, played Euridice as a sort of Witherspoonish character out of Legally Blonde. Her singing became steadily stronger as the scene progressed, adding more fullness and vibrancy. One wished for more optics (particularly facial expression) in her portrayal to parallel the beautiful singing in her arias.

Deserving special mention is choreographer Jillian Foley. She created a visual delight with the dancers. How nice to see ballet so prominent in this production, directed by Chas Rader-Shieber, and done in such a way (so very Gluck-like) as to adhere to and advance to the story line.

Why are the trees walking about?

Having the crimson trees being carried about on the stage by choristers as Orfeo and Euridice sing through their arias and duets was distracting. It was the only moment when acting/singing might have prevailed with subtle background motion rather than the feeling that the lovers were on an obstacle course. Was it a metaphor?

Word did reach me over the centuries that the “Che faro senza Euridice”/”What shall I do without Euridice” aria has become a iconic vocal favorite. I am pleased at that and at the rendering on this Portland stage by Ms. Eddy. The understated compassion, a pure and authentic rendering was my desire and it was fulfilled.

No, Orfeo could not resist looking into Euridice’s eyes. She expires at his feet, he sings. But the “Che faro” stirs Amor, who makes all well and (in a departure from the original myth) the reunited lovers are returned to the earthly world.

I can see that my efforts were not in vain. My Orfeo at least lives on. My intention to bring color back to the operatic stage seemed to work out well for future generations. I can return to my eternal rest, my Elysium, with a full heart.

Portland Opera provided great music and stagecraft this year. Faustian tales, fairy tales. How could they go Gluck-en free in this season of great classic stories brought to the operatic stage? Orfeo: an opera beginning, brings here an ending. Now through the looking “Glass” and more for next year’s Portland Opera season.