Out of Sterno: heroine’s journey

Out of Sterno, the Deborah Zoe Lauffer play that concludes its run at the Siren Theater on Sunday, July 29, manages to teach (and not preach) us how to be better citizens.

Dotty, the heroine of Out of Sterno, has never left the walls of her small and very pink home. Her life is centered on her husband Hamel. She spends her time preparing dinner, doing his laundry, and rewatching video footage of the first time they met. Dotty’s call-to-adventure is literally an unexpected telephone call from Hamel’s mistress, Zena. 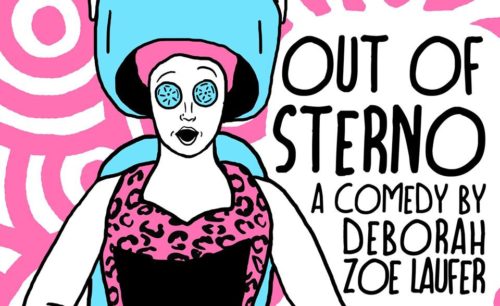 At first, Dotty smiles and denies the unpleasant truth of the affair: “As Momma always said, ‘there’s nothing so horrible it can’t be explained away.’” Dotty leaves her home, and witnesses Hamel and Zena embracing and smooching. Nevertheless, she proceeds to see the best in Hamel. She even befriends Zena. Eventually, Dotty’s agency and personal power materialize after an absurd yet tender journey through the manifold obstacles in her way.

Eleanor Herreid O’Neill plays Dotty with balance and control. O’Neill especially shines when she addresses the audience directly. The crowd is invited to laugh at her and to presume that they know what is best for her, yet O’Neill remains one step ahead. During one heartbreaking moment, she asks the audience why they are just sitting there, judging her, and watching in silence. Dotty’s obstacles in the story are also reflected in the audience’s presumptions of what a “real woman” ought to be. The audience becomes complicit in her tragedy.

Eric Simons, playing Hamel, doesn’t reach for the low-hanging fruit of caricature. His gentle warmth pulls the audience into lapses of forgetting his transgressions. This brings a closer empathy with Dotty, and helps the audience understand the complexities of abuse cycles. Further, Janet Scanlon, playing Zena, allows us to see her vulnerability beneath the spiritual bypassing, narcissism and verbal abuse.

Scott Engdahl, plays seven (!) characters, both male and female. Impressively, he plays each character with a distinct voice and physicality.

The set design, by Hingyi Khong, is one of the production’s most enjoyable aspects. The kitchen is a two-dimensional backdrop painted in bold colors with a stove, chair, toaster, and refrigerator. Lacking a third dimension, the visually compelling set corresponds to Dotty’s own struggle between depth and superficiality. The show’s color palette is also strikingly unified; even the smallest props, such as the purple zebra hand towels, exist in relation to the strong colors of the backdrop.

Out of Sterno is a smart and affecting play in which the dominoes of action fall steadily. The audience is drawn in by Dotty’s compelling emotional reality, while the absurdity in the play amplifies the daily reality of violence against women. As the show unfolds, the audience is challenged to encounter the ways in which sexism lives in us all.

At the end of the play, Dotty says goodbye to the audience and announces that she has to leave us to go start her new life. I couldn’t help but feel that she’s better off without the burden of our gaze.