Judge Henry Hughes calls the work in the 29th collection of poetry and prose “exceptionally high quality,” despite a pandemic hit to the budget and fewer contributions from adults.

Reading the Paper Gardens anthology, published annually by the Arts Alliance of Yamhill County, offers an intimate glimpse into the hearts, minds, and imaginations of people young and not so young through story and poetry.

This year’s edition, the 29th, is no different in that regard. More than 400 entries were submitted, fewer than the 500-plus in  2020, but more than last year’s 351. Editors selected 60 pieces from 49 authors for publication, and the 108-page collection was published earlier this year.

Given the number of participants, Paper Gardens is arguably Yamhill County’s largest literary event, but hardly the only one. Mac Reads, launched in 2005, draws hundreds each year to read a book and then hear from the author. For 2022’s event, Mexican-American writer Luis Alberto Urrea dropped by Linfield University last week for a talk about his 2018 novel The House of Broken Angels. The McMinnville Public Library hosts a monthly poetry night, among  other events.

All that remains to rebound from the pandemic are our two volunteer-run writers’ conferences. Fire Writers, which is exclusively for youth, is still on hold, but I’m told there are tentative plans for the Terroir Creative Writing Festival to return in late April.

The publication of Paper Gardens 2022 notwithstanding, COVID did exact a toll.

“Funding sources from service groups dried up over the COVID years,” said coordinator Deborah Broocks. “We have a grant proposal in to Yamhill County Cultural Coalition, but we are focusing on local donations from individuals and literacy groups like book clubs and writing groups.  We have a pretty small budget, a little over $3,000. We’re hoping to get enough donations to cover the publication of the anthology.  The price for that has gone up significantly.”

Adult participation dropped off markedly the past couple of years. The pandemic was surely a factor, but this year, with organizers moving to online submissions, Broocks said many adults may have been intimidated by the new system in comparison to tech-savvy students. Eighty adults participated in 2020, and little more than half that submitted pieces for this year’s book.

“We are trying to improve our outreach to adults,” Broocks said. “We’re hoping to do some Paper Gardens tutorials at libraries in January.  We are planning to post videos and submission tips on the AAYC Paper Gardens page. We have a goal to increase adult participation next year.”

Paper Gardens is a smorgasbord of traditional poetry, free verse, poetry of place, haiku, and prose, both fiction and nonfiction. The project was founded by local poet Rachel Burchard, who died in 2004. Her poem provides the project’s name and is featured in the front of the volume:

Paper Gardens has, since its inception in 1993, featured some of Oregon’s literary finest as judges: William Stafford got things rolling the debut year, and others have included Floyd Skloot, Ursula K. Le Guin, Primus St. John, Robin Cody, Paulann Petersen, and Kim Stafford.

This year, poet and retired Linfield University writing teacher Barbara Drake returned for her fourth turn as the prose judge. She’s the author of a widely used college textbook, Writing Poetry, and her most recent collection is The Road to Lilac Hill, published by Windfall Press in 2018.

Western Oregon University teacher Henry Hughes, who has had several poetry collections published, including the Oregon Book Award winner Men Holding Eggs, came aboard this year as the poetry judge. Having been involved in academic and public literary projects like Paper Gardens for nearly 30 years, Hughes said that reading this year’s entries was a delight, and he noted that the quality of writing on display was inextricably bound up with the area’s education system and overall support for literary arts.

“It was a delight to read the work, it was exceptionally high quality,” he said. “That doesn’t happen naturally in a community. It requires a lot of good teaching and cultivation and emphasizing the importance of writing and literature in our lives. These young people are excited, and they value poetry and fiction, so they’re writing very well. They’re getting some good instruction. You’re in a really amazing community up there.”

A dozen pieces by adults are included, but work by youth and children makes up the bulk of the publication, representing 19 public and private schools in Yamhill County.  As I noted last year, it’s a window into interiority that sends a clear, unambiguous signal that these are young people who are paying attention to life, and who think and feel deeply. The world’s ecological problems and class structures are not lost on them.

One youth, Amity High School’s Alec Prevett, powerfully stakes out an identity rooted in a strong sense of place in a poem titled Where I’m From. In five stanzas, he reveals what it means, for him, to be “from the country.” An excerpt:

In the fiction category, one finalist that caught my eye was Patton’s Molly Swart, who literally begins the horror tale Knock-Knock with the words “It was a dark and stormy night.” The story is deceptively simple, a man answering a late-night knock on the door in (of course) an isolated area, but is also delightfully creepy with a final, macabre line that dutifully nods to Edgar Allen Poe.

And one has to be impressed by the fact that at least some local children are writing haiku. Most by children and youth had nature themes, like this one by Memorial Elementary School’s Mackenzie Mendonca of McMinnville:

Entries by older writers also provide a mix of themes and approaches. In a clever fiction piece titled Fixers, Dennis Bershaw imagines a script meeting in which there’s a surprising reveal at the end. Jennifer Enzor gives voice to a book in which the title character is The Complete Works of Jane Austen on a Desert Island. In the nonfiction category, the pandemic takes over the narrative, as a planned vacation in 2020 turns into a forced staycation at home. The takeaway, interestingly, highlights the supreme importance the arts played in getting people through those long months of quarantine:

“I made six bigfoot statues, painted, learned eight new songs on the ukulele, did a little yard work when it was dry one day, made delicious meals, watched The Office daily for some comic relief from the news, read The Grapes of Wrath and played ping pong.”

Prose judge Drake notes that Paper Gardens isn’t just a chance to take a shot at publication; it also provides students with an opportunity to collaborate with an adult serving as a mentor and editor.

“There is always a dedicated group of editors behind the final product, teachers who helped students achieve their final works, committee members who organized it all and helped the final product, parents who encourage their kids to be creative,” Drake said. “The publication is the work of many people from the community to bring out an appealing book with a beautiful cover and well-designed layout.”

Submissions for Paper Gardens 2023 opens Jan. 1, with entries due by March 2. There’s a 1,000-word limit for fiction and nonfiction, and a 40-line limit for traditional poetry, free verse, haiku, and poetry of place. Children and youth may enter for free, and there’s a $4 entry fee for adults. Judges next year will  be Lisa Ohlen Harris for prose and Annie Lighthart for poetry. The book release celebration will be held in May. 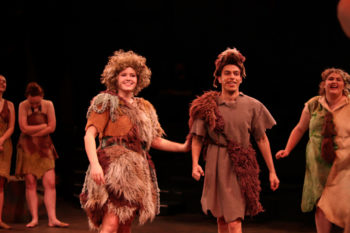