Remembering what is lost, kept, altered, and shared

The artist’s statement that accompanies Linden Eller’s Little Small exhibit, on display through June 1 in Newberg’s Chehalem Cultural Center, makes a fascinating point about the nature of individual memory, which is integral to the images she’s given us.

Amnesia is popularly regarded — when it’s regarded at all — as the result of trauma: physical trauma, such as a blow to the head, or psychological trauma, a natural psychological defense mechanism that shields us from recalling some experience too painful to revisit. Those, to be sure, are variations of amnesia, but ignore a crucial fact: Most adults’ first memory is from around age 3 or 4. The first years of our lives are lost to us.

Eller developed an interest in this “childhood amnesia” when she spent a year working with children at a kindergarten in Maebashi, Japan. She responded, as artists do, artistically: A project was born, which began with drawn recollections by children ranging in age from 2 to 6 and culminated with Eller’s sewn-collage versions of those drawings. The pieces were paired and were first exhibited in Maebashi. Now the exhibit has taken up residence in the cultural center’s Central Gallery. Eller writes: “This project is a reflection on what is lost, kept, altered, and shared during the first years of life.”

Eller was born in 1984 and grew up in Phoenix, Ariz., before heading to Southern California, where she earned her BA in studio art. She has traveled a great deal; besides living and working in Japan, she’s lived in New England, Australia, New Zealand, and Europe. My interview with Eller, who has returned to Phoenix, was conducted by email and has been edited for length and clarity.

I’m always interested in origins, beginnings — and, of course, this goes directly to an interest of yours: memory. What do you recall about your own introduction to art and creativity? How did you choose to make it a career?

Eller: Growing up, I was interested in a variety of creative pursuits — dance, choreography, singing, piano, photography, writing, drawing. My friends and I would even shoot and edit our own short films. I was a very creative child and teenager. I think that span of mediums leaked into adulthood, as I still often struggle with defining myself as a specifically categorized type of artist.

Upon arriving at college and sadly discovering there was no dance program, I began studying film, and later switched to studio art, emphasizing drawing and painting. I didn’t have a lot of other interests (outside creative ones), so it was a natural choice to move in that direction. I never considered choosing something that was pragmatic over something I loved. 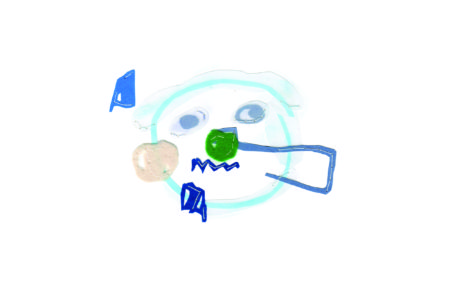 I was astonished to see how widely you’ve traveled. How are you able to do that? Did your artistic work pay the way, or do you have to supplement your income?

When I left to travel the first time in 2006 after graduating, I had used all the exhibition sales from my thesis show to buy a plane ticket to London. I found a job in a tiny village on the east coast of England and then traveled on my savings. I rarely made income creatively and always worked a variety of jobs while abroad: apricot picking (Tasmania), waitressing (Melbourne), wool handling in the sheep-shearing gangs (New Zealand), teaching kindergarten (Japan).

In countries I was unable to work in, I traveled extremely frugally: hitchhiking, couch-surfing, and doing volunteer work-exchanges through programs like wwoof.org and helpx.net. Serendipitously, one of those farm hosts, who is now a dear friend, gave me an opportunity to illustrate her new book. That led to a few illustration projects that also helped get me around. Various artist residencies played an additional role.

Why did you want to travel? Did you have a specific goal in mind?

Initially, I wanted to “disappear” for a while on my own, specifically in a very quiet, unknown place, which is what led me to that tiny village in England. Those first nine months away led to a recurring theme of place in my narrative, and I became more intentional in continuing. No real goals, other than curiosity, and a desire (perhaps subconscious in the beginning) to see what else was out there, other than the traditional American urban lifestyle I knew.

Tell us about Little Small, how it came about and how you did it.

When I was living in New Zealand, I became close with a family with two young boys on a small farm. The youngest, age 3, gave me a painting before I left, and I loved his color choices and shapes so much that I wanted to re-create it with my collage materials. I loved the idea of bringing attention to the intuition and lack of self-awareness that children create from, how boldly and unapologetically they make decisions.

I shelved the idea of turning it into a series until I began working as a kindergarten teacher in Japan, which turned out to be a challenging time. I thought if I were to collaborate on a series of work with the children, I could end things on a more meaningful and positive note. I quickly set up meetings with my boss and a gallery in town to propose the project, and had only two months left to complete everything before leaving the country.

The process involved sitting down with each child, and asking them to draw a memory from our school year together. I had spent some time mourning over this notion of childhood amnesia. While sharing such an intimate season with these kids, I realized that I would go on to remember it dearly, but that most likely they would not. There’s naturally a lot of melancholy there, but also reinforcement of the value that comes from staying present. 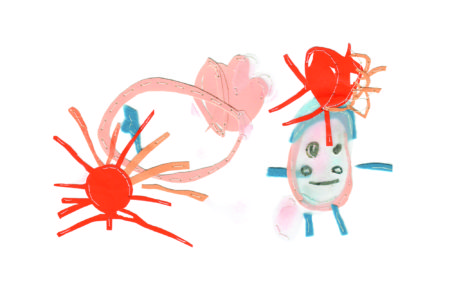 I know that you do work with found objects, which got me wondering about the fabric, thread, etc. that appears in your “half” of each piece of Little Small. Are those from scraps you found?

Unfortunately, most of the materials used for this project were not found. Since I was re-creating specific images, I had to find specific colors, which for the most part limited me to using plain paper and felt. However, I did try to incorporate other fragments when possible, and it’s fun to discover those here and there in the pieces.

What you term “memory architecture” on your website plays an important role in your work. How did that happen?

I think the theme emerged slowly over time. I remember listening to the Radiolab podcast Memory and Forgetting, which made a huge impact on my work. Discovering the truth about how memory works was both heartbreaking and fascinating — that each time we remember something we are not accessing the pure, original, objective file, but actually are recalling the altered version of the last time we remembered it. Eventually, memory becomes this extraordinarily layered, shifting, inaccurate, nonlinear concept, and I wanted to try to represent that visually.

I have to ask: Have you read Proust?

Ah, I’ve wanted to read Proust for years, but haven’t made it happen yet! I’m pretty sure I have a copy of Swann’s Way in storage that I picked up while living in the Shakespeare & Company bookstore in Paris back in 2007. Someday.

Obviously, some visual artists are drawing on specific memories as they create images, but to what extent do you think that process is at work below the radar? The extent to which an abstract work features, perhaps unbeknownst to the artist, images, ideas, and feelings that they are “remembering”?

It makes perfect sense, and I do think that perhaps the memory process is in action, conscious or not, while making abstract work. I think our minds often rest in memory when they aren’t being used for other jobs, and since there is so much space for reflection during creation, I’m sure people wander in and out of their recollections. Our own narratives are the truest thing we know and can offer, though I’m trying to make more work about the concept of collective memory.

You began your career in roughly the same period that our world was being rocked by the internet. Social media and various digital platforms give you a global voice, but how does that advantage square with being one voice in a sea of millions?

I reflect on this often. I’m not sure I’m able to come to a confident conclusion regarding the benefits and disadvantages of the digital platforms. Yes, it’s easier to get your work out there, and therefore it’s incredibly oversaturated. I think I take the same perspective with it as I have in other areas of my life in relation to new technologies — creating a balance so I can participate in the good qualities it offers, but not use it as an ultimate replacement for older, slower (analog) methods. I’m on Facebook, but I still write letters and load my film camera. I use Instagram as a platform to share my work, but also pursue opportunities for it to be seen physically, confident that it’s an entirely different and significant experience.

Any advice for other artists on how to get their work not just “out there,” but actually noticed, bought, etc.?

Ha, I still need this advice! The best I can offer is: Admit that it’s hard, accept help, give yourself grace, and keep going. Having a presence on various platforms can help, but it won’t get you far if you’re not putting in the work in the studio. I’m constantly trying out new ideas and suggestions of what could work, so I think staying open to alternative routes is always helpful. The main difficulty for me has been the lack of a singular community and the identity that comes from being a “local artist.” Choosing to engage in the place you live and building upon those connections is a great way to create a genuine network that supports you and is something I’m looking forward to being able to do.